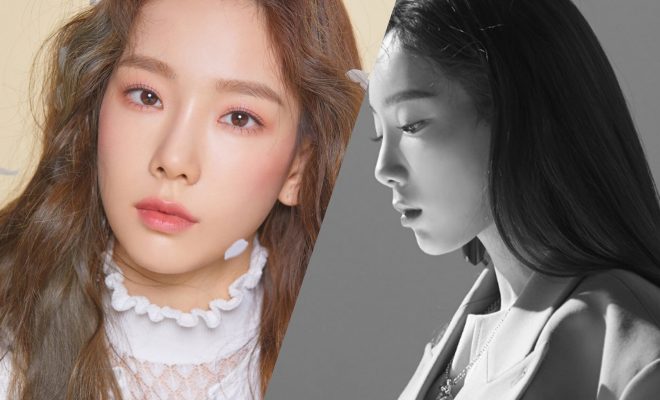 Feel the emotions of “Four Seasons” with Taeyeon this March.

Girls’ Generation’s Taeyeon will join the line-up of March releases with the single “Four Seasons” and its B-side track “Blue”.

Coming after nine months since her third mini album Something New, the upcoming releases will once again showcase the emotional vocals and deep sensibility of the singer when they come out on March 24 through various music sites.

In line with this, SM Entertainment revealed stunning and dreamy teaser photos featuring the leader of Girls’ Generation, along with a promise of touching yet unique song. Additionally, the entertainment company unveiled the first teaser video which saw the words “The four seasons come and go…”

Taeyeon will drop a total of four teaser videos before the big reveal of the music video on March 22.

Recognized as one of the most talented vocalists in K-Pop, the leader of Girls’ Generation has come out with chart-topping tracks since her debut as a soloist in 2015, with the extended play I whose lead single of the same title topped Gaon’s Digital Single Chart.

Her most recent EP Something New peaked at the third spot of Gaon’s Album Chart and at the fourth spot of Billboard’s World Albums Chart.

Aside from her successful career as a girl group member and solo artist, Taeyeon also made a name for herself in Korean dramas through her numerous soundtrack appearances.

She has lent her vocals to well-known dramas such as Beethoven Virus, Athena: Goddess of War, The King 2 Hearts, That Winter, the Wind Blows, You’re All Surrounded, and Moon Lovers: Scarlet Heart Ryeo.

Meanwhile, Taeyeon will hold encore concerts for her ‘s… concert tour at the Jamsil Indoor Gymnasium on March 23 and 24.

We need your support! If you have enjoyed our work, consider to support us with a one-time or recurring donation from as low as $5 to keep our site going! Donate securely below via Stripe, Paypal, Apple Pay or Google Wallet.
FacebookTwitter
SubscribeGoogleWhatsappPinterestDiggRedditStumbleuponVkWeiboPocketTumblrMailMeneameOdnoklassniki
Related ItemsGirls' generationTaeyeon
← Previous Story Nam Joo Hyuk Fascinates In Esquire Magazine Photos, Thinks Fondly Of “The Light In Your Eyes”
Next Story → HallyuPopFest 2019: Get More Up-close With Your K-Pop Bias For Just $68 With “HallyuPass”