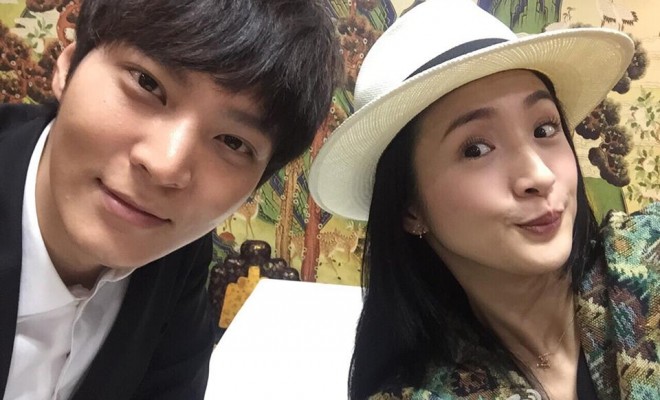 Taiwanese actress Ariel Lin flew in to Korea to attend the 10th Seoul Drama Awards which was held on September 10. Off from her schedule, she visited actor Joowon on set of the current hit drama Yongpal. One of Ariel’s most popular dramas It Started With A Kiss was aired in Korea SBS’s channel, and another drama of hers In Time With You has also been adapted to Korean version That Time We Were Not In Love.

Ariel revealed two photos of her with Joowon through her Weibo account, with caption:

(Translated) Due to fortuitous circumstances, ended up visiting actor Joo Won from series Yongpal on set. Such a shy and courteous man! We even exchanged gifts. I heard that many Korean actors are just like me; love to keep a set of bright, clean teeth so I gave him a set of limited edition porcelain dental set from Taipei National Museum. Hopefully, there will be an opportunity to collaborate in the future. 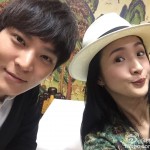 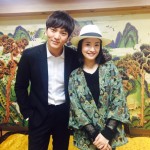 Reported by Taiwanese media outlet ETtoday, aside from the dental set, she also prepared another gift for him, which is a wine stopper. It also revealed that Joowon, who visited Taiwan last year for fan meeting, hopes to pay a visit to Taiwan again, but not just for work.

Ariel also took this opportunity to teach Joowon how to compliment Taiwanese beautiful ladies in Chinese, but Ariel playfully taught him “Ariel Lim is beautiful”, which Joowon later acknowledged the meaning and expressed that Ariel was playful. Aside from that, Joowon also got to know the Taiwanese actress, who is majored in Korean language, back in her university days, and hopes to have a chance to collaborate with her in either movie or drama in the future.

The two photos below are released by ETtoday, provided by Ariel’s agency. 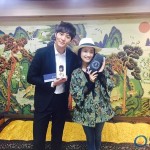 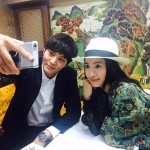