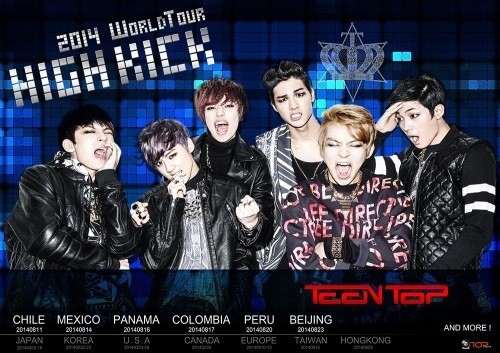 TEENTOP will head to South America for their World Tour

TEENTOP will be heading to five South American countries for their TEENTOP 2014 World Tour High Kick.

The group held their tour in Korea, Japan, United States, Canada, Russia, Hungary, France, Taiwan, Hong Kong and many more countries, but this time, they are heading to South America to meet their fans there.

At first, TEENTOP had only scheduled their tour for Mexico, Panama, and Peru, but they have now added Chile and Columbia as well.

TEENTOP will be preparing their hit songs such as Rocking (장난아냐), No More Perfume On You (향수 뿌리지마), Supa Luv, Clap, other hip-hop and ballads for their fans in South America.