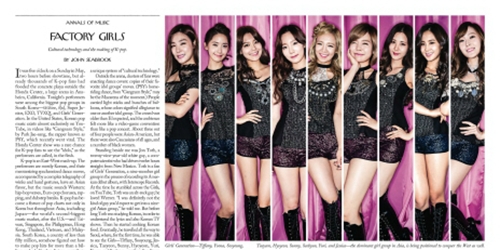 The New Yorker talks about Lee Soo Man and K-pop

The New Yorker has released a special column to elaborate on the coming and cultural influences of Korean pop. Author John Seabrook shares about how K-pop has become a phenomenal genre throughout Asia and is progressively making its way into the West.

Seabrook reveals that SM Entertainment’s founder Lee Soo Man devised a method widely used among majority of the Korean companies today. Young teenagers are recruited into the agency and go through a stringent process of training where they are educated in the arts, linguistics, and many more subjects aside from their regular education.

The ‘trainees’ are put into groups which differ from the West which mainly houses solo artists and bands. Girls’ Generation was used as an example of a popular group with a total of nine members. Seabrook explains that Lee implements ‘cultural technology’ to create the ideal K-pop tune. He continues on to reveal that K-pop producers are aiming abroad and he beings talking about EXO who performs songs in Korean and Mandarin.