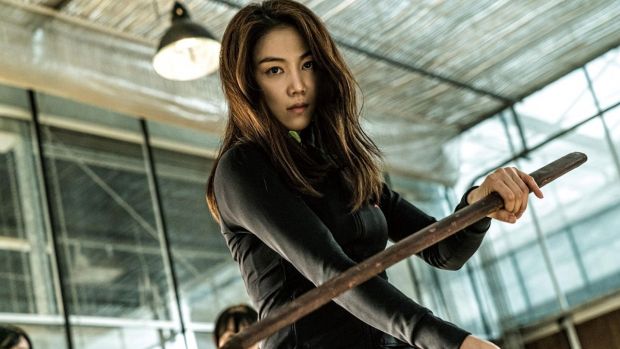 Jung Byung-gil’s The Villainess made a grand entrance into the world of cinema, with its premiere at the 70th Cannes Film Festival in May 2017, which received a four-minute standing ovation. Award-winner Kim Ok-bin puts on a terrific performance as the assassin/double-agent protagonist, and her unlimited energy is what pushes the film forward, even through slower segments. But we’re just getting started.

The film opens with a bang: Sook-hee is in full form as she effortlessly takes down numerous people in a hallway, and as she makes her way to confront Park, the big bad boss. There are a few henchmen that she also needs to take care of. She does so with such ease that it makes the audience realizes that this woman is a pro, with years of practice and loads of determination. It’s a bit of a shock, then, that she’s surprised by the police as she tries to make her subsequent escape.

Was it a trap? Or just a point in the plot that needed ironing out a bit more? There are a few throughout, but perhaps the most perturbing is the one, which forms the basic premise of the entire film. After being captured by the law, Sook-hee faces a compulsory career change. The South Korean Intelligence Agency fakes her death, gives her the new name Chae Yeon-soo, and requires 10 years of service as a sleeper agent, and then she’s free to go with her daughter because, by the way, she’s pregnant when all this happens. Didn’t see the last bit coming, did you?

So, if you’re raised as an assassin, and then taken on by an agency that gives you another assassination as your first assignment, how likely is it that you’ll have a clean slate with no strings attached presented to you on a silver platter later down the line? The chances are probably about the same as being involved in a vending machine accident, or any other life odds you would never expect. They are always going to want more than their pound of flesh. And yet Sook-hee/Chae Yeon-soo goes along with it. And we’re still scratching our heads trying to work out why.

However, if you can get past this, the film does have some wonderful redeeming qualities. The story is masterfully told through vivid scenes from current day events mixed with flashbacks from Sook-hee’s childhood. The character development is well done as we learn that an unnamed man, identifiable by a lackadaisical whistled tune, plays a huge role in the fate of Sook-hee. The viewers are left with no doubt as to why the poor girl has to follow her unfortunate path nor why she follows it with such devotion. As we see more and more flashbacks, the past and the present merge, leading to a finale that ends in much the same way as the film opened: our star surrounded by police, sporting the same wry smile. A wonderfully cyclical touch.

A strong start and an even more impressive finish sandwich a somewhat meandering plot interspersed with an array of excellent action sequences. Despite the plot holes, The Villainess is a film full of kinetic thrills to satisfy even the most die-hard fans of the genre. It also deserves the recognition it has received as an outstanding example of a Korean action film.