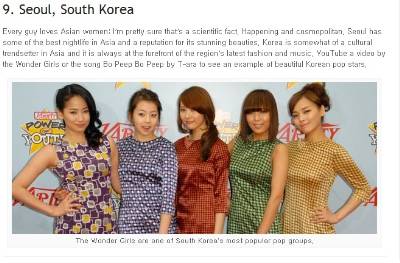 An article in  the February issue of Traveler’s Digest recently caught the attention of Korea. Seoul, South Korea ranked 9th in the article about beautiful cities and was the only Asian country on the list.

“Every guy loves Asian women! I’m pretty sure that’s a scientific fact. Happening and cosmopolitan, Seoul has some of the best nightlife in Asia and a reputation for its stunning beauties. Korea is somewhat of a cultural trend setter in Asia and it is always at the forefront of the region’s latest fashion and music. Youtube a video by the Wonder Girls or the song Bo Peep Bo Peep by T-ara to see an example of beautiful Korean pop stars.”

A photograph of the Wonder Girls was included below the summary along with a caption:

“The Wonder Girls are one of South Korea’s most popular pop groups.”

Hellokpop, as an independent Korean entertainment news website (without influence from any agency or corporation), we need your support! If you have enjoyed our work, consider to support us with a one-time or recurring donation from as low as US$5 to keep our site going! Donate securely below via Stripe, Paypal, Apple Pay or Google Wallet.
FacebookTwitter
SubscribeGoogleWhatsappPinterestDiggRedditStumbleuponVkWeiboPocketTumblrMailMeneameOdnoklassniki
Related ItemsBo Peep Bo PeepSeoulSouth KoreaT-araTraveler's DigestWonder GirlsYoutube
← Previous Story T-ara to visit Malaysia for showcase in October
Next Story → Gu Hye Sun supports leukemia patient Seo Deuh Kuh