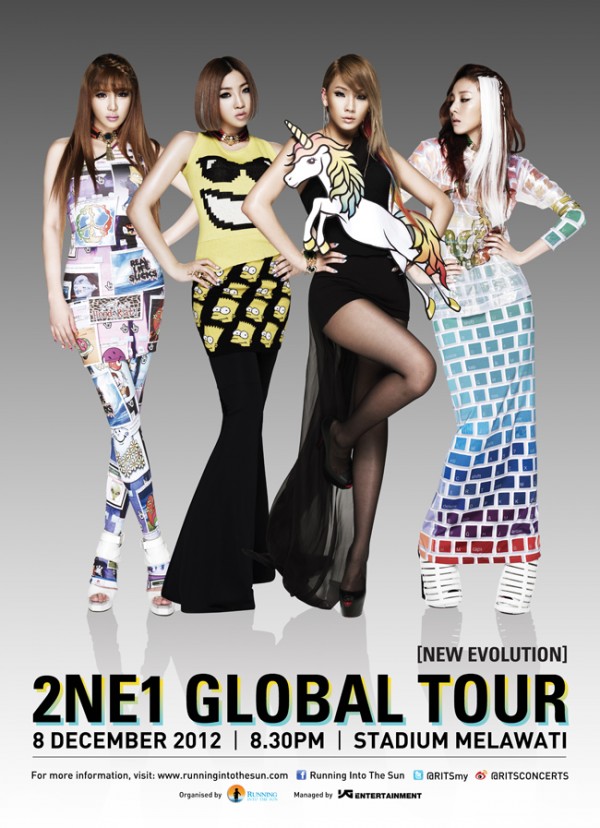 An exclusive one-night only 8,000 capacity and a high quality RM 3 million concert is what audiences can expect at the first-ever 2NE1 concert in Malaysia on 8 December 2012 at Stadium Malawati, the 2NE1 GLOBAL TOUR 2012 in MALAYSIA – NEW EVOLUTION.

“We received feedback from a number of fans requesting for the ticket launch to be held on Friday as it is a public holiday and they would have more time to queue up to get the best seats available. We value feedback and aim to make our best effort to provide the best concert experience, which starts right from the beginning when purchasing tickets. After weighing the situation, we decided to bring forward the ticket launch day to make it more convenient for fans.” says Beatrice Chia-Richmond, Creative Director of Running Into The Sun.

Trail-blazing K-pop girl group 2NE1, made up of 4 distinct individuals – CL, Dara, Bom and Minzy – will be making a stop here for their 2NE1 Global Tour- New Evolution concert on 8 Dec 2012, 8.30pm, at Stadium Malawati. Ticket sales start on 27 Oct with more ticketing details available from RITS within the next week. Regular updates will be posted on www.facebook.com/runningintothesun and @RITSmy on Twitter. Strictly a one-night only show with no further addition of tickets, this concert will mark the first time ever that 2NE1 are coming to Malaysia.

Embarking on their first ever World Tour, 2NE1 has achieved the distinction of being the first Korean girl group to hold a world tour. Known for their edgy music and unique fashion style which have distinguished them from other K-pop girl groups, 2NE1 have collaborated with world-renowned names such as The Black Eyed Peas, will.i.am, and fashion designer Jeremy Scott and gained recognition for their immense talent and influence by picking up MTV Iggy’s “Best New Band in the World” award in 2011.

2NE1 Global Tour 2012- New Evolution kicked off in Seoul on 28 and 29 July at the Seoul Olympic stadium to an audience of 20,000 fans, and will be brought to 10 cities in 7 countries throughout Asia, the Americas, and Europe. Greatly anticipated by fans here, the concert is sure to be a feast for the senses with high-energy, fist-pumping music accentuated by explosive, dynamic dance moves. This tour will feature original designs by one of the most influential fashion designers in the world, Jeremy Scott, and is the first time that a Korean girl group will have specially designed stage costumes by a world-famous fashion designer.

2NE1 Global Tour 2012 in Malaysia – New Evolution is managed by YG Entertainment and organised by Running Into The Sun and will be held 8 December 2012, 8.30pm at Stadium Malawati. 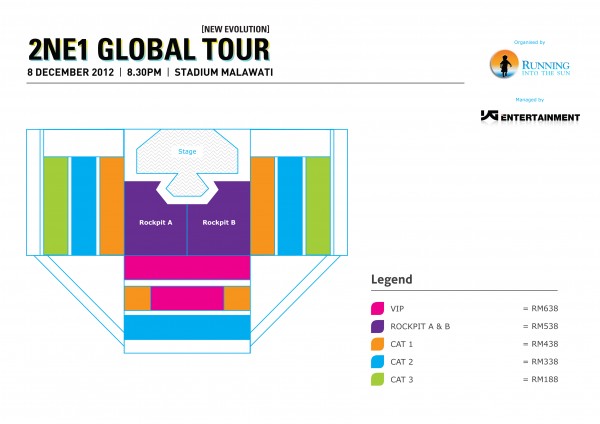 – Customers are allowed a maximum number of 8 tickets per transaction

– Minimum age for entry: 12 for Rock Pit, 3 for other categories