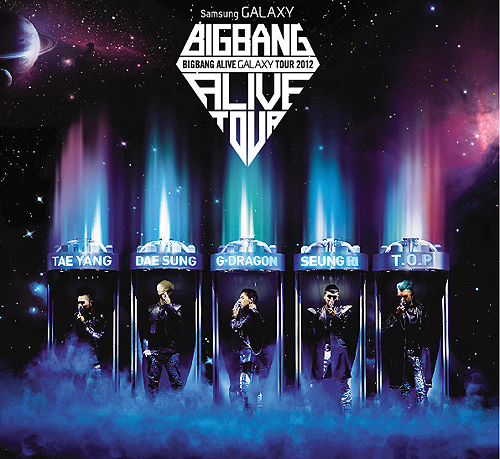 The official ticketing information for the BIGBANG Alive Galaxy Tour U.S. has been released. As mentioned before, the following prices will be for the concerts on November 3, 2012 at the Honda Center in Anaheim, California and on November 9, 2012 at the Prudential Center in Newark, New Jersey.

The tickets for the tour dates will be available through Ticketmaster on the 22nd of September at 10:00AM EDT/PDT. Ticketmaster has provided two separate link for the Honda Center show: General/VIP tickets and Premium Level Seating tickets. However, the Prudential Center show will only have one link for all tickets.

BIGBANG initially kicked-off their global tour, “BIGBANG ALIVE GALAXY TOUR 2012,” in Korea in March, where they played for more than 30,000 fans, with three shows selling out instantly.  They stormed Japan playing 13 sold out shows for more than 210,000 fans.  They made history in Shanghai, Guangzhou and Beijing with 3 shows and more than 32,000 tickets sold. BIGBANG Alive Galaxy World Tour 2012 has sold out in every country they have visited.   In Jakarta, all tickets were sold out in a mere 10 minutes. In Singapore, all tickets were sold out shortly after going on sale and a second show was immediately announced to cope with the huge ticket demand from the enthusiastic fans. Later in Malaysia, they attracted more than 3,500 fans to queue up at the box office to fight for their tickets. Most recently in Taiwan, where BIGBANG is immensely popular, all 22,000 tickets of their 2 shows were sold out within just a few hours.

BIGBANG consists of 5 members: G-Dragon, T.O.P, Seungri, Taeyang and Daesung.  Known for their unique music style and flamboyant fashion sense, BIGBANG is currently one of the most prominent Korean artists both locally and internationally. They have gained immense popularity and recognition amongst music lovers and fashionistas all over the world.

The members of BIGBANG, each of whom has amazing individual talents, took a break to focus on their own solo activities in August, including the launch of G.Dragon’s 2nd solo album “ONE OF A KIND,” T.O.P’s participation in spy movie “Alumni,” and Seungri becoming the host of his own TV program “V.I. FROM BIGBANG.” Starting in late September they will resume their concert tour activities to meet with their beloved fans and supporters around the world including Singapore, Thailand, Indonesia, Taiwan, Philippines, Malaysia, United States, Peru and Japan prior to their first ever concert in Hong Kong in December.

BIGBANG ALIVE GALAXY TOUR 2012 is a history marking collaboration between BIGBANG and the world-class production team led by Laurieann Gibson, the director for Lady Gaga’s “The Monster Ball Tour,” who has joined as the creative director for the tour. The production team, who has collaborated with Madonna, Michael Jackson, Beyoncé, Linkin Park and many other big names, will be in charge of bringing the most fascinating stage effects to the audiences in Hong Kong.

BIGBANG has had an incredible year with 5 music videos in Korea receiving more than 10 million views on YouTube including “Monster,” “Blue,” “Fantastic Baby” and “Bad Boy.” They were at the top of the album charts in Korea for the first half of the year with their comeback album “Alive,” together with the special edition album “Still Alive,” which garnered combined physical album sales of more than 400,000 copies. These icons of Korean pop music also beat out Britney Spears for “Best Worldwide Act” at last year’s MTV EMA’s.

Samsung Galaxy is the global sponsor of “BIGBANG ALIVE GALAXY TOUR 2012 in the U.S.”

For more on BIGBANG, visit: http://www.facebook.com/BIGBANG