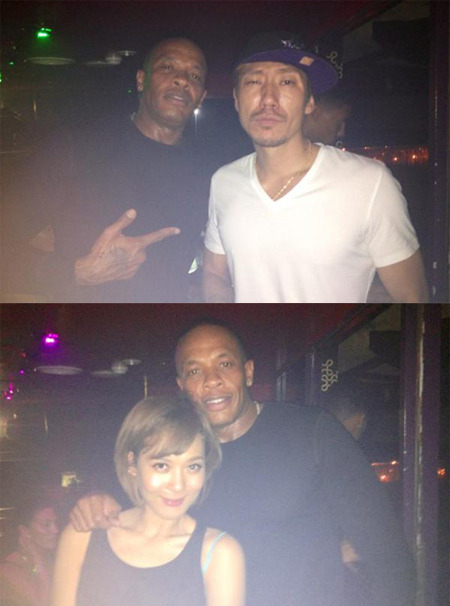 In a meeting between hip-hop scene leaders, rappers and couple Tiger JK and Yoon Mi-rae both met with rapper and producer Dr. Dre recently for a friendly chat, according to a source.

An official with Tiger JK told Star News that the American hip-hop mogul, who was visiting Korea for Eminem‘s concert as well as for business with his headphone brand, personally invited the couple because he wanted to meet with “musicians that represented Korean hip-hop”. The meeting took place on August 18, at a club in Seoul’s Gangnam district.

The topic of conversation revolved around music, with both parties praising each other’s work and exchanging episodes, and family; with Dr. Dre introducing Tiger JK to his son. The parties are said to have promised to collaborate in the future; renowned producer The Alchemist, who also happens to be Tiger JK’s childhood friend and in Korea as Eminem’s tour DJ, was also at the meeting and wished to work with Yoon Mi-rae in particular.

The official passed along Dr. Dre’s words that he hadn’t known much about Korea before but came to love the country’s energy; the source added that Tiger JK had a very meaningful time thanks to the invitation.

A Drunken Tiger/Tasha collaboration with Dre is certainly an exciting idea for the future, but all parties appear extremely busy with other things for the time being. The Korean couple, after collaborating with Far East Movement earlier this year, is currently recording Yoon’s much-anticipated comeback album for a late-2012 release. Meanwhile, Dr. Dre has said that he will be taking a break from music to focus on his Beats By Dre line and his family (with studio album Detox still on indefinite hold).