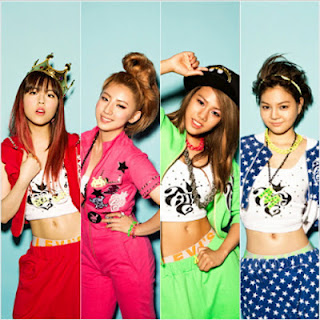 By The Editor | August 23, 2012
FacebookTwitter
SubscribeGoogleWhatsappPinterestDiggRedditStumbleuponVkWeiboPocketTumblrMailMeneameOdnoklassniki

New rookie girl group Tiny-G has made its official debut with the release of its first self titled single and music video Tiny-G!

The group name stands for Tiny Giants and the group consists of the four members: J.Min, Dohee, Myungji and Mint. Before their debut, the girls showcased their vocal and dancing skills on  MBC Music’s Show Champion with their pre-debut track Polaris. The track was given to the group as a gift from  Jay Park and Lee Si Young. The group has now officially debuted with its title track, Tiny G, check it out below:

Hellokpop, as an independent Korean entertainment news website (without influence from any agency or corporation), we need your support! If you have enjoyed our work, consider to support us with a one-time or recurring donation from as low as US$5 to keep our site going! Donate securely below via Stripe, Paypal, Apple Pay or Google Wallet.
FacebookTwitter
SubscribeGoogleWhatsappPinterestDiggRedditStumbleuponVkWeiboPocketTumblrMailMeneameOdnoklassniki
Related ItemsDoheeJ.MinJay ParkLee Si YoungMBC MUSICMintMyungjiShow ChampionTiny GiantsTiny-G
← Previous Story BIG BANG’s ‘MONSTER’ dance practice video revealed
Next Story → Tasty reveals dance practice video for ‘Spectrum’ and ‘You Know Me’