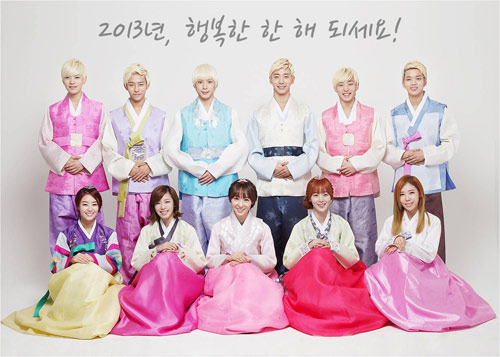 In the photo, Han Soo Yeon is sitting in the middle with SECRET members Song Ji Eun, Jeon Hyosung, Han Sunhwa and Zinger to her side. All of them are sitting and having their hands gathered on their laps. B.A.P members Zelo, Daehyun, Himchan, Bang Yong-guk, Jong-up, Youngjae gathered their hands and stand behind their fellow label mates. You can see the 11 members looking toward the camera, showing true family-ship.

To name a few of TS Entertainment’s accomplishments, SECRET released Poison and recently made a comeback with their new song Talk That. Although they were not very active with Talk That due to the unfortunate car accident, they tried their best at the year-end shows and ceremonies. B.A.P dominated the new artist awards as they debuted in January of 2012, releasing five albums so far. Their hard work throughout the year has allowed them to be acknowledged as the new generation of K-Pop. Actress Han Soo Yeon has completed filming in two movie pieces and both will be released in the new year of 2013. All 11 celebrities of TS Entertainment have accomplished a lot in the year of 2012.

Agency TS Entertainment said, “We prepared this seat to thank the public and fans who showed so much love during 2012 and as 2013 is coming up we wanted to give them a new years greeting. We hope you will continue to love and support TS as we plan to grow and mature more in 2013.”