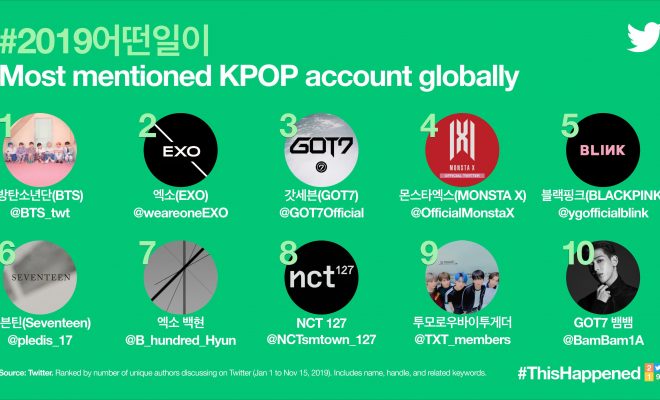 A list of the most-mentioned K-Pop accounts for 2019 has been released by Twitter Korea – and is your favourite artist in it?

On December 10, Twitter Korea shared a brief wrap-up of the most memorable K-Pop moments and achievements on the platform for the entirety of 2019, and among this was the rankings of the most mentioned K-Pop acts all over the world. 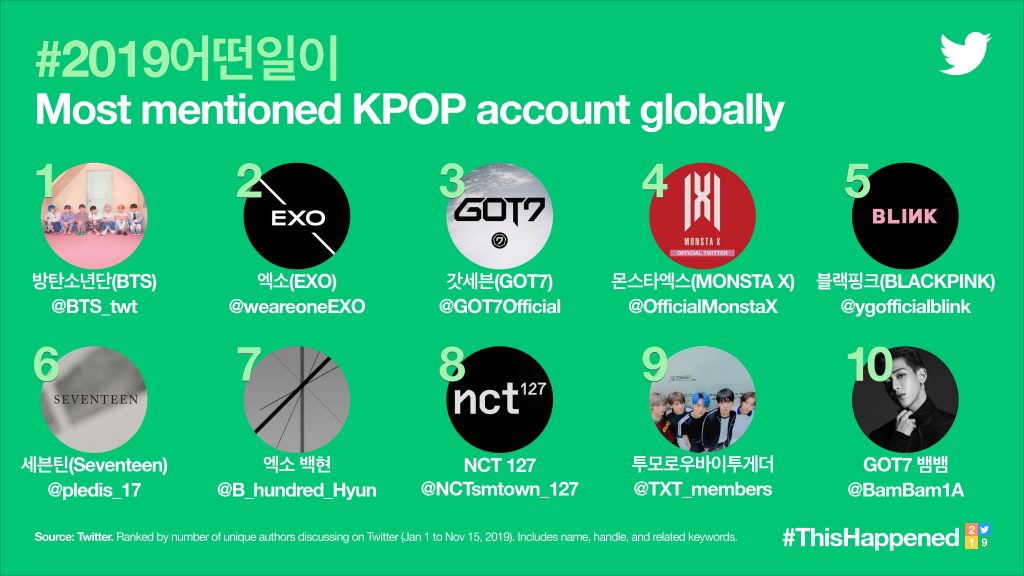 Taking the top spot was BTS, who was also named as Twitter’s No. 1 top global user of 2019. A video of Jungkook dancing to Billie Eilish’s “Bad Guy” also received a special shout-out from the social media site as it became one of the most liked tweets in the world after accumulating over 25.7 million cumulative views, 950,000 retweets, and 2.2 million likes.

EXO ranked second on the list, showing how they continued charming the world this 2019 – especially with their latest comeback through their seventh studio album Obsession. In line with the concept of their return, the group introduced a separate Twitter account for their alter egos X-EXO which had quickly gathered over 420.9k followers since it was created on the latter half of October 2019. Meanwhile, EXO’s original account has over 6.7 million followers.

Meanwhile, GOT7 reigned on the third spot of the most mentioned accounts of 2019, and with their massive world tour, sets of amazing comebacks, and members’ individual activities, there had been so many reasons for their over 7.2 million followers to always talk about them and make them attain such a high spot.

MONSTA X also showed their strong presence on Twitter by ranking at fourth place, proving the immense support from their fanbase over the year – which included putting hashtags related to them on the top trending spots worldwide consistently every day for over a month as a form of both support and protest regarding recent events.

Rounding up the top five is BLACKPINK, who also makes an incredible feat as the only girl group in the top ten list.

SEVENTEEN followed on the sixth spot, showing their growing international fanbase just in time for their second world tour.

Landing on the seventh place as the highest soloist/individual account on the list is EXO’s Baekhyun, who has been very active on the social networking platform to interact with his fans on a random basis.

Meanwhile, his labelmates NCT 127 successfully scored the eighth spot on the list, and is the only NCT sub-unit to show in the top ten.

TXT also successfully placed ninth on the list, giving them the remarkable feat of being the only rookie group to enter the top ten.

Lastly, the gem of Thailand – GOT7’s BamBam – makes it to the list as he lands on the tenth spot, becoming the second individual account and the only one from his group to do so.

The ranking was based on the number of unique authors discussing on Twitter from January 1 to November 15, 2019 and included names, handles, and related keywords to each of the artists.

Hellokpop, as an independent Korean entertainment news website (without influence from any agency or corporation), we need your support! If you have enjoyed our work, consider to support us with a one-time or recurring donation from as low as US$5 to keep our site going! Donate securely below via Stripe, Paypal, Apple Pay or Google Wallet.
FacebookTwitter
SubscribeGoogleWhatsappPinterestDiggRedditStumbleuponVkWeiboPocketTumblrMailMeneameOdnoklassniki
Related ItemsBaekhyunbambamblackpinkBTSEXOGOT7monsta xnct 127SeventeenTwitter KoreaTXT
← Previous Story JYP Entertainment To Take Legal Action Against TWICE’s Aggressive Fans Following Airport Incident
Next Story → MOMOLAND To Cap Off The Year With A Digital Single