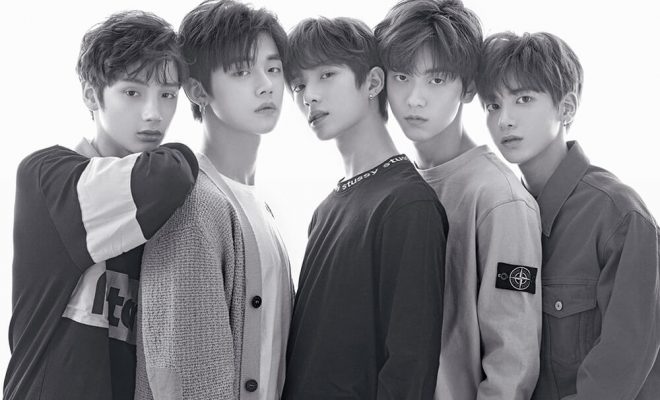 Mark your calendars — TXT members are ready to open the first chapter of their dream debut in March!

Big Hit Entertainment finally confirmed the debut of its new boy group TXT by sharing more details on the upcoming activities of the boy group.

Yeonjun, Soobin, Huening Kai, Taehyun, and Beomgyu will make their highly anticipated debut as TXT on March 4 with their first album Chapter of Dream: STAR. They will then have their debut broadcast through Mnet’s Debut Celebration Show, which will air on the same day at 7 p.m. KST.

On March 5, the boy group will hold a debut showcase at the Yes24 Live Hall in Seoul.

The news was met with much excitement from fans, who have been looking forward to the boys’ debut after Big Hit Entertainment confirmed the launch of its new boy group six years since BTS.

The entertainment company started introducing the lineup of TXT, which stands for Tomorrow x Together, on January 11 through the opening of its website and the reveal of Yeonjun as the first member.

On January 14, Soobin was unveiled as the second member, followed by Huening Kai on January 16. Taehyun came next on January 18, before Beomgyu completed the lineup on January 21.

A photo and an introduction film featuring all five members were released on January 24. Yeonjun, Soobin, Huening Kai, Taehyun, and Beomgyu also greeted their fans through the launch of their official Twitter account, @TXT_members.

The boys then kicked off February with the launch of their fan community website and V Live channel.

Hellokpop, as an independent Korean entertainment news website (without influence from any agency or corporation), we need your support! If you have enjoyed our work, consider to support us with a one-time or recurring donation from as low as US$5 to keep our site going! Donate securely below via Stripe, Paypal, Apple Pay or Google Wallet.
FacebookTwitter
SubscribeGoogleWhatsappPinterestDiggRedditStumbleuponVkWeiboPocketTumblrMailMeneameOdnoklassniki
Related ItemsTXT
← Previous Story New Boy Groups From “YG Treasure Box” To Possibly Debut As 13-Member Team
Next Story → Games’ Recap, Highlights & Winners Of “2019 Idol Star Athletics Championships”