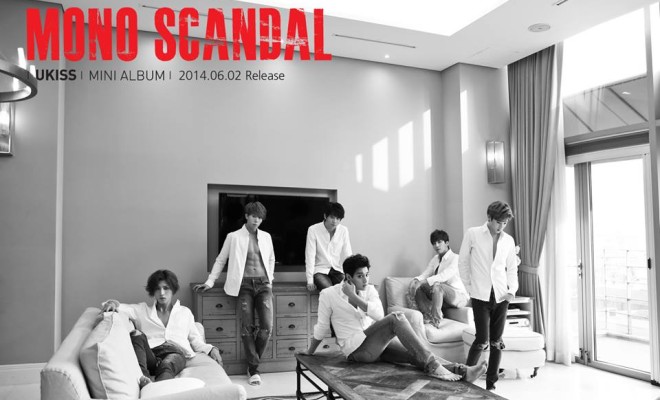 U-KISS is set to join the line-up of June comebacks with their new mini-album, Mono Scandal!

On May 27, the group unveiled a teaser image for the upcoming release on their Facebook page. Mono Scandal, set to be released on June 2, is wildly anticipated as it will not only mark U-KISS’s sixth anniversary, but will also be the first release with new member Jun.

The title track Don’t Flirt With Me is produced by Duble Sidekick and the music video directed by Lee Deok Hee, acclaimed director of the film Changsu. It is said to showcase the group’s growth and maturing and a “departure from typical idol music”, with concepts aimed at an international audience.

Vocalist Kevin tweeted in anticipation and asked fans to look forward to the release, and in particular to look after and support the new youngest member, Jun.

A teaser is planned for release on the 28th through U-KISS’s official YouTube channel, so get excited!