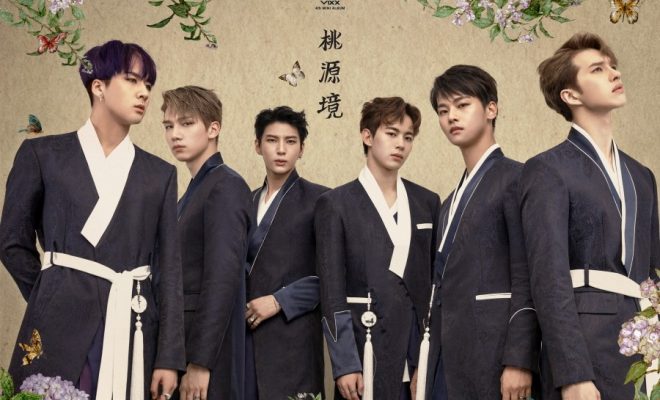 By Narelle Wilkinson | May 18, 2017
FacebookTwitter
SubscribeGoogleWhatsappPinterestDiggRedditStumbleuponVkWeiboPocketTumblrMailMeneameOdnoklassniki

The music video, which has been released to accompany the title song off their new album, is stunningly beautiful, and is sure to be a winner with fans.

VIXX is known for its unique and creative concepts. This comeback features an oriental fantasy theme along the lines of the traditional Eastern utopia of Shangri-La.

The unique and fresh approach features individual photos, as well as a group photo of the members, depicting them dressed in a modern interpretation of traditional East Asian clothes, with each member’s name in calligraphy and birth flower.

VIXX has managed to adopt the concept flawlessly, and succeeded in creating a mystical and dream-like feel with both the song and music video for Shangri-La.

The beginning of the title-track features a gayageum (Korean traditional string instrument), which perfectly reflects the ethereal beauty of the concept. The choreography in the video utilises traditional fans, which only add to the elegance of the theme, creating an even more innovative performance. The feeling of other worldliness is accentuated by the incorporation of spinning planets into several scenes.

On May 16, their agency Jellyfish Entertainment announced that the newly released album Shangri-La has taken the top two spots on Hanteo’s daily chart according to statistics on May 15.

Released to commemorate the fifth anniversary of the idol group, the two versions of the album were based off of the motif of birth flowers and birth stones. The birth flower version topped the charts with the birth stone version coming in a close second.