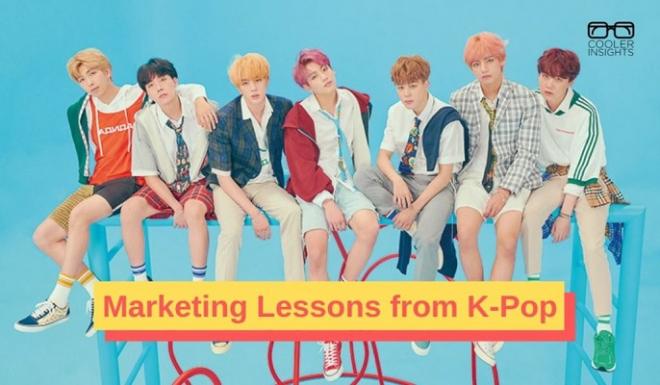 K-Pop bands have some of the highest viewing numbers anywhere on the internet, with a global following of millions of hardcore fans. Find out how K-Pop marketing drives their popularity and how you can use these strategies to boost your business.

Looking at the current record for most-viewed music videos in a 24 hour period, it’s incredible to think that a staggering 9 out of 10 entries originate from K-Pop. BTS alone accounts for half of the entries, with 2021’s “Idol” topping out the list at 108.2 million YouTube views. The rest of the list is dominated by female K-Pop acts, with the only non-Korean performer, Taylor Swift, managing to scrape 9th with “Me” at a paltry 65 million.

Of course, it would be foolish to think that all these millions of views only come from South Korean audiences. K-Pop is a global cultural and musical phenomenon, beloved by hardcore fans everywhere in both the East and West. Other examples of the insane popularity of Korean pop music would also have to include Psy’s mammoth smash hit “Gangnam Style” that’s currently sitting on upwards of 3 billion YouTube views and counting. Further afield, there are plenty of other established and emerging acts like BlackPink, Girls’ Generation, and EXO who are helping to push the genre’s popularity even further.

So how has a very specific market of South Korean pop music ballooned to be the global powerhouse that we’re left with today? And what insights can this musical movement provide about successful marketing techniques?

The biggest K-Pop groups operate like well-oiled machines with huge staffs of professional marketers keeping audiences engaged across dozens of social media platforms. Much like a single soldier on the battlefield has millions of dollars of equipment and logistical support backing them up, K-Pop groups’ social media accounts are micromanaged to the smallest detail by massive record labels like YG Entertainment. Both groups and individual members have their own curated feeds and content streams that help cross-promote other band members and vice versa.

This constant flurry of interconnected social media activity has proved irresistible to K-Pop fans eager for their next dose of celebrity engagement. In many ways, this aspect of social media marketing mirrors the power of omnichannel marketing, where a brand maintains a consistent and harmonious presence across all its different platforms to promote a coherent, integrated brand message that constantly reinforces itself. If you can maintain a high pace of social media activity and continuously like, share, and comment on other people’s posts, you too could tap into the power of a larger audience network.

For diehard fans, much of the appeal of K-Pop groups lies beyond just their music videos and live performances. These bands all provide audiences a constant drip-feed of new content that provides intimate access to their favorite stars. Such content might include behind-the-scenes mini-documentaries, backstage tour videos, performance rehearsals, and even travelogues when the stars are on vacation.

Not only does this generate anticipation for their upcoming tours and album launches, but it also intensifies fans’ connections to their favorite artists, and establishes a precedent for high-frequency content consumption among fans. From a marketing perspective, this shows the power of content to help engage audiences with your brand beyond what a limited advertising campaign can achieve. “Content is king” is a relatively old saying among marketers at this point, but it’s still the truth. You can leverage this by sharing teasers for upcoming product rollouts and sharing interviews or testimonials with customers and clients. This is a great way to build your brand and invite audiences to explore your business on a deeper level.

Giving the Spotlight to Audiences

A defining factor of the K-Pop scene is the fanbase: they’re among the most loyal and rabidly enthusiastic in any music genre, with a strongly developed sense of identity. K-Pop groups often have revolving lineups with individual members joining from other K-Pop bands, and their continued survival in a group often hinges on cultivating the goodwill of their core audiences. Fans of different bands also have their own unique titles like ARMY (BTS fans), Onces (Twice fans), Blinks (BlackPink fans), and more.

The bands help stoke this fan fervor and constantly shout them out in their social media postings and during live performances. The result is that millions of fans feel personally invested in the success of their favorite artists and actively promote them through viewer engagement, such as helping new music videos get the most views in a 24 hour period. Beyond this, K-Pop conventions and fan expos routinely offer fan communities a chance to mingle with performers and build networks with other like-minded K-Pop fans.

By repaying audiences for their investment in the band, K-Pop artists create the kind of frenzied brand loyalty that most marketers can only dream about. Nevertheless, the lesson is clear: give audiences a sense of authentic ownership of your brand, and viewers will respond. Create spaces for dialoguing with audiences and customers, and listen to them when they tell you what they like or dislike about your commercial practices. Creating shared signifiers between you and the audience—whether it’s a jingle, hashtag, or emoji sequence—is also a great trick for quickly creating a sense of exclusive insider membership and brand alignment.

Admittedly, K-Pop isn’t the only genre of music that attracts fan-made content; but it might be the only one that encourages it to such an active extent. While other music labels pursue copyright infringement orders and takedowns on unauthorized use of their songs on tube sites and social media, K-Pop acts positively encourage their audiences to use songs and video/ concert footage in mashups, collages, and concert videos posted by members of the audience. Once again, the generosity of K-Pop artists is repaid many times over when fan-made content helps generate clicks and publicity around their favorite bands.

The lesson for marketers is that it pays to encourage fans to take from your content to make something new. This sort of audience engagement is terrific for social-proofing your brand and increases the chance of something from your content marketing strategy going viral. You could even consider approaching audiences or social media influencers to cover your events and product rollouts with the incentive of freebies and discounts if need be. These people have their own networks of audiences and even their own brands to maintain, so utilizing their online clout to promote your products is a win-win situation for everyone involved.

Today, the global K-Pop market is estimated to be worth almost $5 billion USD. For a niche pop genre that’s barely thirty years old, that’s a truly staggering figure. However, K-Pop wouldn’t have been able to reach such astronomical heights without tapping into the emotions of fans to such devastating effect. It’s the fans that help these artists sell out shows and break YouTube records all over the world, and the power of K-Pop marketing has given birth to a grass-roots passion and devoted fanbase that you’ll struggle to find in any other genre on a commensurate scale.

While employing these marketing strategies won’t guarantee that your brand becomes a household name, they do point the way to cultivating more valuable relationships with audiences and leveraging a sense of ownership to help score leads and set your business apart from the competition.