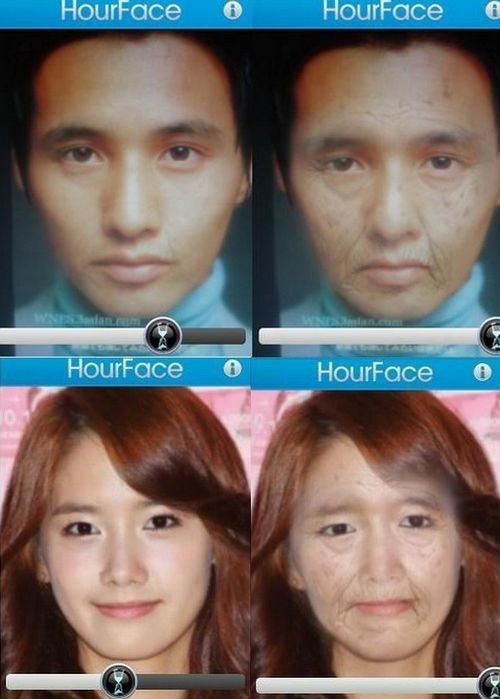 Photos of YoonA‘s and Won Bin’s imaginary, aged, faces have been made public.

On the 23rd of July, photos of several celebrities were posted on an online community board, along with the comment, “This is popular with middle school students these days.”

The photos of SNSD’s YoonA, actor Won Bin, actor Kang Dong Won and other celebrities who have been blessed with gorgeous features were transformed into old and aged figures via a smart-phone application, creating shocking visuals.

The well-defined features and flawless skin associated with these celebrities disappeared into thin air, and in their place appeared age spots, wrinkles and drooping eyelids. As if foreshadowing the future and calling attention to the inevitable process of aging with the passage of time, the photos show that even top stars cannot escape from this cruel fact of life.

Netizens posted various comments in response to the photos, saying:

“I cannot believe that this imaginary aged person is YoonA.”
“An aged YoonA is still pretty.”
“Celebrities also are unable to stop the flow of time.”
“I do not think that Won Bin will ever age.”

It is difficult imagining the celebrities we know as old and aged, isn’t it?

Hellokpop, as an independent Korean entertainment news website (without influence from any agency or corporation), we need your support! If you have enjoyed our work, consider to support us with a one-time or recurring donation from as low as US$5 to keep our site going! Donate securely below via Stripe, Paypal, Apple Pay or Google Wallet.
FacebookTwitter
SubscribeGoogleWhatsappPinterestDiggRedditStumbleuponVkWeiboPocketTumblrMailMeneameOdnoklassniki
Related ItemsKang Dong WonSNSDWon BinYoona
← Previous Story Ace Of Angels reveal 6th, 7th and 8th member + group teaser image
Next Story → ‘JAY PARK TV’ releases first episode