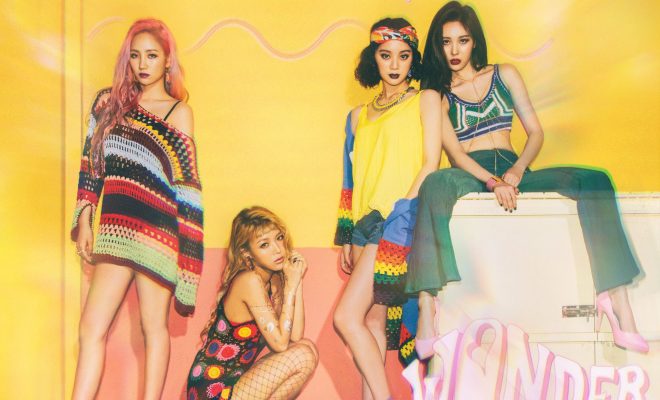 The Girl Group That Wonder Girls Is Jealous Of?

It’s a powerful girl-group that is under the watchful eyes of J.Y Park as well!

The Wonder Girls recently made their strong comeback with the reggae-influenced Why So Lonely on July 4. On the same day, the girls held a live broadcast through V app to showcase their new song, where they discussed their thoughts on the trending and fellow JYP-produced girl-group, Unnies.

The girls jokingly revealed that:

Although Park Jinyoung PD will not cast us aside, we do feel a little uneasy inside. We and Unnies released comeback news on the same day, but he only helped to promote Unnies. When our new song was released, we were concerned about what he would do to show his support. We feel that he prefers Unnies better.

Despite the Wonder Girls showing off their jealous side, both Why So Lonely and the Unnies’ debut track, Shut Up, are well-received by the public. Why So Lonely dominated 8 local charts upon release, with Shut Up topping online charts as well.

Hellokpop, as an independent Korean entertainment news website (without influence from any agency or corporation), we need your support! If you have enjoyed our work, consider to support us with a one-time or recurring donation from as low as US$5 to keep our site going! Donate securely below via Stripe, Paypal, Apple Pay or Google Wallet.
21
SHARES
FacebookTwitter
SubscribeGoogleWhatsappPinterestDiggRedditStumbleuponVkWeiboPocketTumblrMailMeneameOdnoklassniki
Related ItemsJ. Y. ParkJYPPark JinyoungSHUT UPUnniesUnnies Slam DunkWhy So LonelyWonder Girls
← Previous Story Park Yoochun Sues Another Alleged Victim
Next Story → T-ara’s Soyeon And Oh Jonghyuk Break Up After 6 Years of Dating