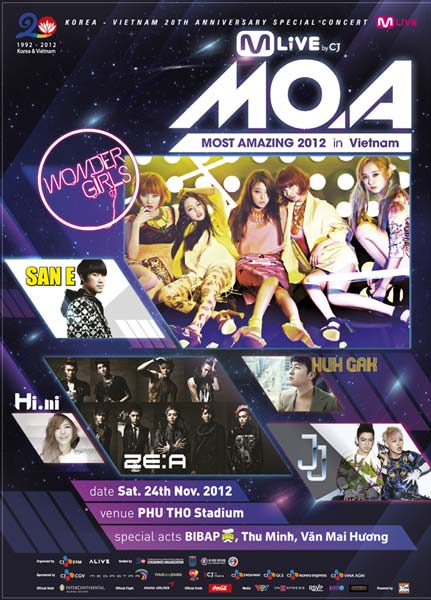 Top Korean artists such as Wonder Girls, Huh Gak, ZE:A, San-E, JJ Project and Hi.ni will be heading to Vietnam this month to perform at the M-Live MO.A in Vietnam on November 24 in Phu Tho Stadium, Ho Chi Minh.

The event is organized by CJ E&M as celebration of South Korea and Vietnam’s good ties for the past two decades.

The show will be composed of three parts; first, a musical entitled Bibap which is about the Korean dish bibimbap and performances from Vietnamese singers Thu Minh and Van Mai Huang. The second part will be performances by various Korean artists  except for Wonder Girls, who will be having an hour of the concert as the main show.

Through the event, an increased awareness of the culture of Korea and Vietnam is expected to take place.