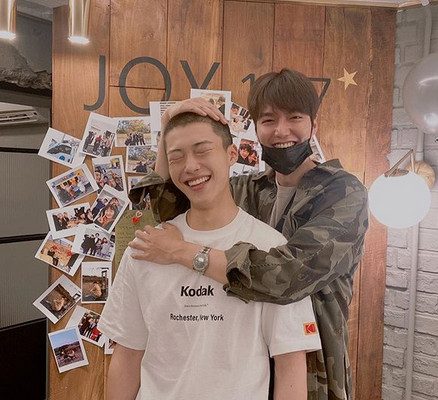 It was a bitter-sweet moment for The King: Eternal Monarch fans as Woo Do Hwan and Lee Min Ho bid farewell!

Just one day before his enlistment, Woo Do Hwan shared a sentimental post on his Instagram account. The actor reunited with his fellow onscreen and real-life friend, Lee Min Ho. The pair can be seen embracing at a beauty shop in Seoul, as Min Ho fondly pats Do Hwan’s fresh buzz cut.

The actor captioned the post, “I’ll be back, Your Majesty”. By doing so, Do Hwan sentimentally recalled the pair’s time together on the beloved Netflix drama The King: Eternal Monarch. The show recently aired its finale in June. The actors’ characters, Emperor Lee Gon and Jo Yeong, shared a heart-warming friendship that left many viewers glued to their screens.

Furthermore, Woo Do Hwan’s impressive task of portraying Jo Yeong as well as his doppelganger Jo Eun Seob, made the actor a standout in the drama.

Woo Do Hwan’s military enlistment begins July 6. Though many fans may miss the actor dearly, they can surely await his return by re-watching The King: Eternal Monarch.