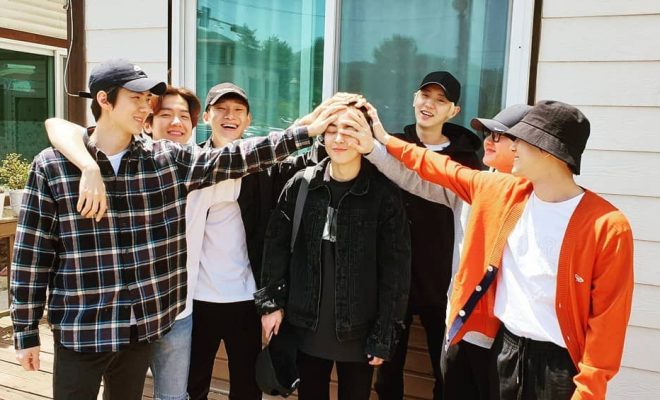 As Super Junior marks the completion of all its members’ military services on May 7, it is time for its hoobae group EXO to start the send off of its members to the army with eldest member Xiumin bidding a temporary goodbye on the same day.

The EXO member, who was born in 1990 and turned 29 years old this year, became the first member of the boy group to enter boot camp. He will serve as an active duty soldier.

Ahead of his enlistment, Xiumin shared handsome photographs of his shaved hair on his Instagram account. In addition, he treated fans with a parade of photo updates as his gifts to fans before he officially starts his mandatory military service.

He captioned the posts with “I will be leaving for a bit. Goodbye for now.” and “You are the reasons I walk.”

Moreover, Chanyeol shared a sweet Instagram update dedicated to his hyung on May 7. The rapper shared a series of photographs of the members, TVXQ’s Changmin, and the staff as they send Xiumin off.

“While hyung protects the country, we will protect EXO and EXO-L,” Chanyeol wrote. He also uploaded a behind-the-scene video clip of their surprise for their hyung during his fan meeting on May 4.

Leader Suho also posted heartwarming photos of his good friend as he departs for his military service. According to the EXO leader, Kai could not join the boys in sending off their eldest hyung as May 7 also marks the first death anniversary of his father.

Lay was also absent in the gathering because he was in New York City for the Met Gala.

Meanwhile, fans all over the world came together to send their love and support to Xiumin through the hashtag #AlwaysWithYouXiu and #XIUMIN_always_you.

Twitter user @glamoursehun wrote, “Today is the day that you will be serving as an active duty soldier. All we want is for you to be safe on this journey. Serve well, our butterfly boy. See you again soon and let’s create new memories.” Another user @addictivexo wrote, “Our days without you might feel empty and it’ll last for 18 months, but I know you’ll comeback fast. Serve your country well, Minseok.”

On the other hand, two days after his enlistment, Xiumin will give EXO-L another present with the release of his digital single “You” on May 9.

Hellokpop, as an independent Korean entertainment news website (without influence from any agency or corporation), we need your support! If you have enjoyed our work, consider to support us with a one-time or recurring donation from as low as US$5 to keep our site going! Donate securely below via Stripe, Paypal, Apple Pay or Google Wallet.
FacebookTwitter
SubscribeGoogleWhatsappPinterestDiggRedditStumbleuponVkWeiboPocketTumblrMailMeneameOdnoklassniki
Related ItemsEXOXiumin
← Previous Story Super Junior And ELFs Welcome Kyuhyun Back To Civilian Life With Much Excitement
Next Story → Girls’ Generation’s Sooyoung Signs With Saram Entertainment