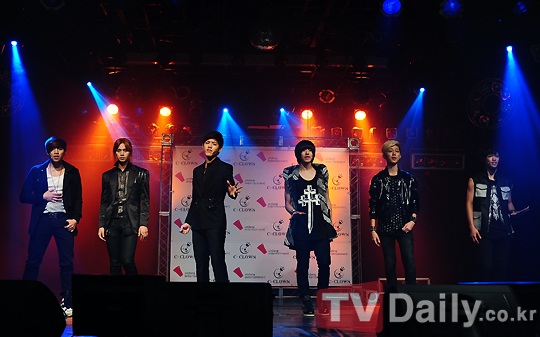 On July 19, Yedang Entertainment‘s first boy group, C–Clown, finally released the MV of SOLO from their debut mini album, Not Alone. Prior to their official debut on M! Countdown on the 19th, C-Clown already had their debut showcase on July 18.

Composer and producer Shinsadong Tiger and Rado, famous hit makers for their works including the likes of BEAST, 4Minute, APINK, MBLAQ andothers, have also participated in making of the album.

What do you think of this new boyband?

Hellokpop, as an independent Korean entertainment news website (without influence from any agency or corporation), we need your support! If you have enjoyed our work, consider to support us with a one-time or recurring donation from as low as US$5 to keep our site going! Donate securely below via Stripe, Paypal, Apple Pay or Google Wallet.
FacebookTwitter
SubscribeGoogleWhatsappPinterestDiggRedditStumbleuponVkWeiboPocketTumblrMailMeneameOdnoklassniki
Related ItemsC-CLOWNdebutmvRadoShinsadong Tigershowcasesoloyedang entertainment
← Previous Story Couple Lee Hyori and Lee Sang Soon went on a holiday with friends
Next Story → Crayon Pop reveals MV for ‘Saturday Night’