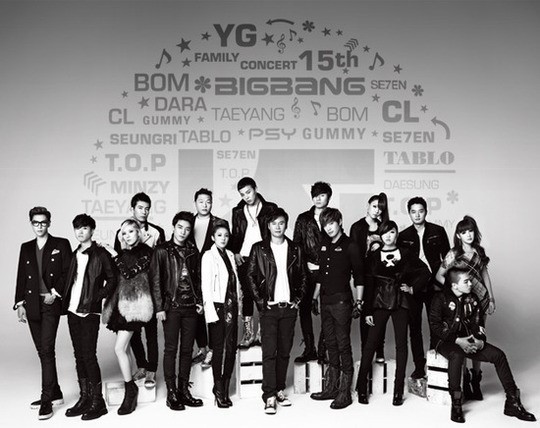 This year, YG Entertainment took control of the music sales with its biggest names PSY, BIGBANG, 2NE1, Epik High and Lee Hi. All the artists have at least took the throne of the spot number 1 once on various music charts all around the world. The 2013 lineup of YG artists’ comeback looks set to threaten the others in the industry, especially as the agency looks to debuting a new rookie group next year. YG Entertainment recently announced that they would be debuting new groups in 2013. Many YG music fans are already holding high anticipation to the new boy group as it has been 7 years since BIGBANG has debuted.

There are more important reasons why people are looking forward to YG’s new rookies. YG is a different agency that stands out from the rest as it releases the least number of rookies among entertainment agencies as observed by industry watchers. Music professionals say that this probably explains how much YG pays attention to the quality of the music and artists. Perhaps due to the length of time it normally takes to train and prepare its artists, that is why whenever it releases a rookie, they leave a huge impact enough to shake the stability of other agencies momentarily.

One highlighted rookie that YG released recently was Lee Hi, who debuted without a long period of training due to the well-established program K-Pop Star Season 1. Nonetheless, she has been leaving great impression on the music industry with addictive songs and style. Regardless of her short training stint with president Yang Hyun-suk himself, Lee Hi has already succeeded well in the industry with her current progress card.

Many professionals in the industry added that it will be worth looking forward to the new YG groups as they have also been under Yang Hyun-suk’s care as well. YG’s official explained, “YG Entertainment’s new group has trained under the direct care of president Yang Hyun-suk for the past 3 years. After their debut, they will be able to freely show their capability. It’s as if watching from a parent’s prospective of their child growing into an adult in 3 years, we want them to be able to show their full potential and find their styles. That is YG’s hope for them.”