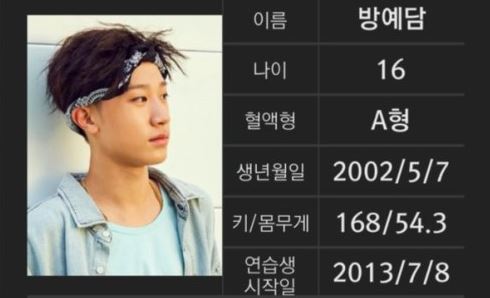 YG Entertainment To Debut Its Youngest Boy Group This Year

Are you ready for a new boy group from YG Entertainment?

Meet Bang Yedam, the second placer on SBS ‘K-Pop Star Season 2’. His boyish charms and confidence caught the attention of the judges and the audience. He covered hits from Justin Bieber‘s Baby to Michael Jackson‘s Black or White. Although he was a runner up on the said competition, this did not deter YG Entertainment‘s Yang Hyun Suk to sign up the young talent with his agency.

A YG Insider revealed that the new boy group had been groomed meticulously and ensured that each member had passed evaluations with flying colors, as well. They also had to meet the expectations of YG Entertainment’s upper management, particularly head producer Yang Hyun Suk.

It took more than four to five years of extensive training, thus the debut of the group is on the horizon. It will most likely happen by July of this year.

Apparently the group members’ age range from 15 to 17 years old.

See past clips of Bang Yedam during his stint at SBS K-Pop Star Season 2.