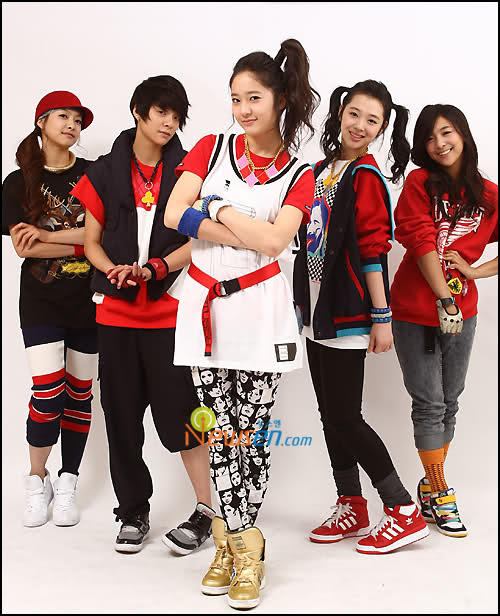 By The Editor | June 5, 2013
FacebookTwitter
SubscribeGoogleWhatsappPinterestDiggRedditStumbleuponVkWeiboPocketTumblrMailMeneameOdnoklassniki 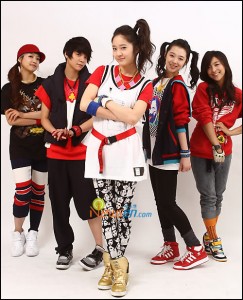 K-pop girl groups tend to be described as fierce or cute.  Some suggest that images of fierceness encourage girls to be empowered, while images of cuteness take away their agency.  However, responses by fans of f(x), a K-pop female group, suggest that fans prefer unique and diverse images of women.

Male groups outnumber female groups in K-pop, but girl groups attract large numbers of mostly female fans.  Commentators and fans describe these girl groups as cute or fierce.  On the blog Miss Unconditionally Moilicious, Miss Mila describes the difference between 2NE1 and SNSD, two of most popular girl groups, this way: “First of all, 2NE1 and SNSD are completely different. 2NE1 is westernized in every way and makes music with “the independent woman” theme. SNSD is much more oriented towards the Asian audience and makes cuter and less intense music.”

Fans tend to think of the independent image of 2NE1 as more empowering and the cute image of SNSD as less empowering.  One respondent wrote:  “I’m not interested in girl groups that go over the top with the cuteness and the aegyo because I just find that plain annoying. So to see a group that focuses on how strong women can be and how women can be without the overuse of ‘cute’ is something that drew me in immediately.” (Anderson, “2ne1 Data Set”).

Lizzie at Beyond Hallyu echoes the critique of the cutesy image for women when talking about SNSD’s “I Got a Boy”:  “However, I was still shocked by how blatantly this song flaunts it’s reductionist, and frankly insulting, view of women. By using a more complex song structure to tell more stories and show more points of view, this song manages to create an even worse image of young women than songs like ‘Oh!’ by the sheer number of negative portrayals. Both the video and the song consistently portray women in numerous different examples as vain, petty, manipulative and incompetent.”

These opinions suggest that fans of K-pop’s girl groups only see images in terms of cute/fierce.  However, fans of f(x) say they like the group for reasons that go beyond the cute/fierce binary.

Like most K-pop fans, fans of f(x) like the group because of the music, which fans find to be unique.  One respondent wrote:  “Just like the meaning of their name, their music does not stick to a single or fixed genre, which i believe is a very good point in terms of music flexibility. they can go from dance to bubblegum pop then to ballads, showing their strength in adapting different genres of music” (Anderson, “f(x) Data Set”).

This range can be seen in the ballad “Beautiful Goodbye” and the dance single “NU ABO”:

Respondents also embrace the variety of concepts of f(x).  They say that the members have different personalities and different talents. One respondent wrote:  “Their music is amazing and their personalities are even better!” (Anderson, “f(x) Data Set”). Several respondents also made reference to their appearance, calling members cute and beautiful. At the same time, respondents identified Amber‘s “tomboy” concept as something they liked.  One respondent wrote:  “But most importantly I like the fact that they have Amber in the group, because she is a tomboy, and not any other group in Kpop or even in the mainstream really have an “amber” in the group!” (Anderson, “f(x) Data Set).

This range of images can be seen in f(x)’s photo shoot for Marie Claire Korea and a photo from a Thailand trip: 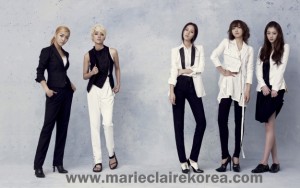 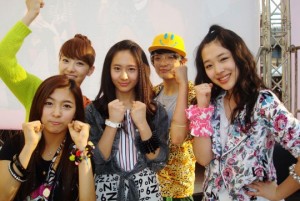 Other respondents see the images of f(x) as falling in between those reflected by SNSD and 2NE1.  One wrote:  “I don’t always follow F(x) but they’re another unique image among girl groups! They also don’t go with traditional cutesy like 2ne1.” (Anderson, “f(x) Data Set”)  Another wrote: “They are  often over shadowed by their SNSD seniors which is what provokes me to pay attention to them even more.” (Anderson, “f(x) Data Set”)

Other respondents also identified the diversity of the members themselves in terms of ethnicity. One respondent wrote:  “Two Chinese members and two English speaking members which makes for me being able to understand them more. Support Victoria because she’s mainland Chinese like myself ” (Anderson, “f(x) Data Set”).  Another wrote:  “I also like how the group is half Korean and mixes members from different places.” (Anderson, “f(x) Data Set”)

Instead of limiting the members of f(x) to one image of women,  fans demonstrate that they like a range of images for women. Respondents shows that they include cuteness as just one of a range of images that women can take on. When commentators use the cute binary to describe girl groups, they are using an Anglo-American feminist lens that not only eliminates other modes of being a woman, but it also overlooks the role that race and ethnicity plays in expressions of feminism.  Caren Kaplan and Inderpal Grewal write:

Many feminists who identify themselves as Marxist view all women as belonging to a unified class with a homogeneous class consciousness. The Eurocentric and class-bound nature of this analysis is reflected in the theorization of the family as the primary site of oppression. Third world feminists and feminists of color have objected to a hegemonic approach that demonizes non-Western families as more oppressive than their first world counterparts. (351)

In other words, commentators measure the feminism of K-pop girl groups by Western definitions of empowerment. These definitions do not take into consideration how different women may value different kinds of femininity. Specifically, commentators define feminism in K-pop by rejecting cuteness.  However, fans of f(x) show that they embrace a range of concepts of women, including cuteness. In this way, they are like other fans of K-pop girl groups. Sun Jung and Yukie Hirata explain that Japanese fans like K-pop girl groups for a variety of reasons:

Lizzie, “Girls’ Generation has a boy and some serious gender troubles.” Beyond Hallyu. 1 Mar 2013.