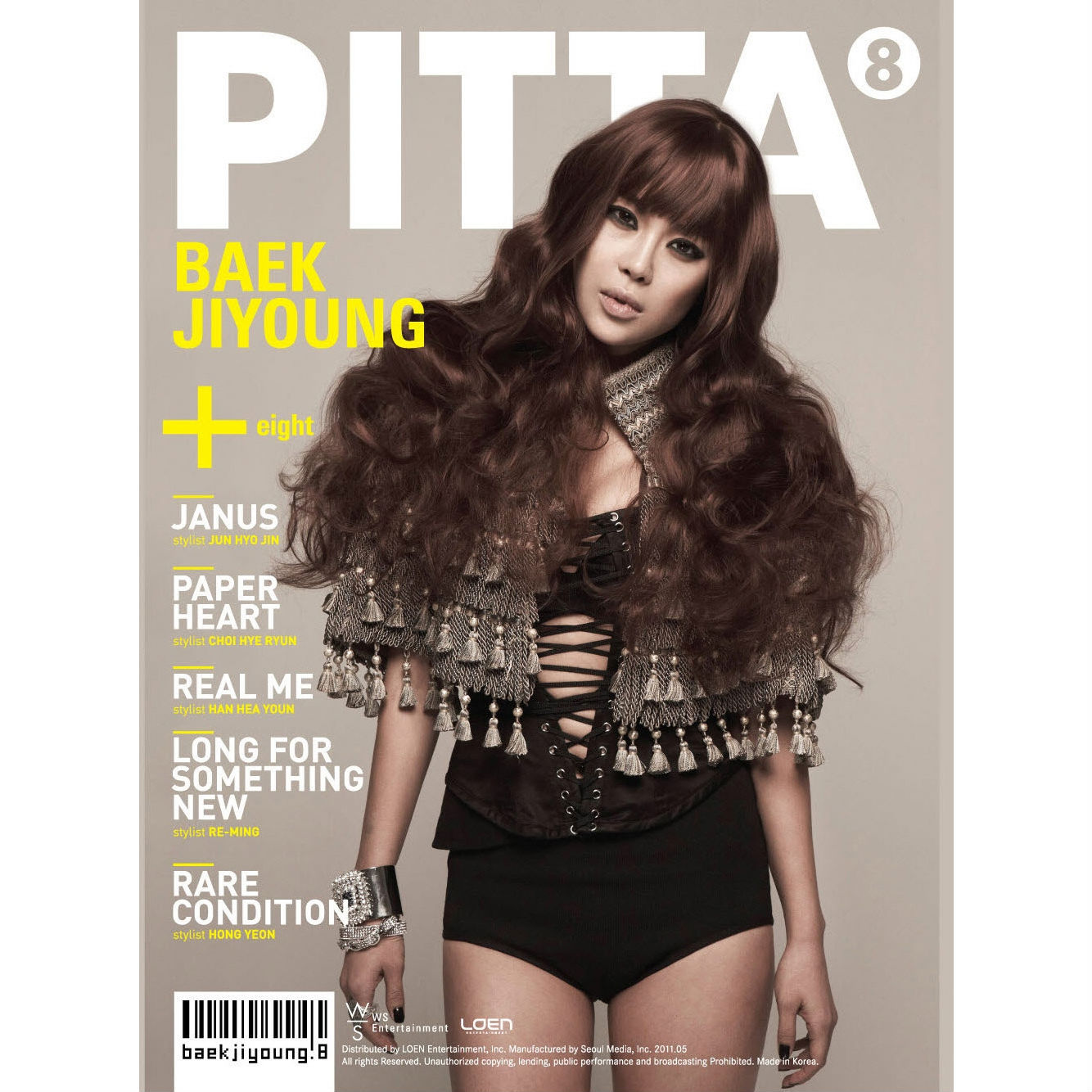 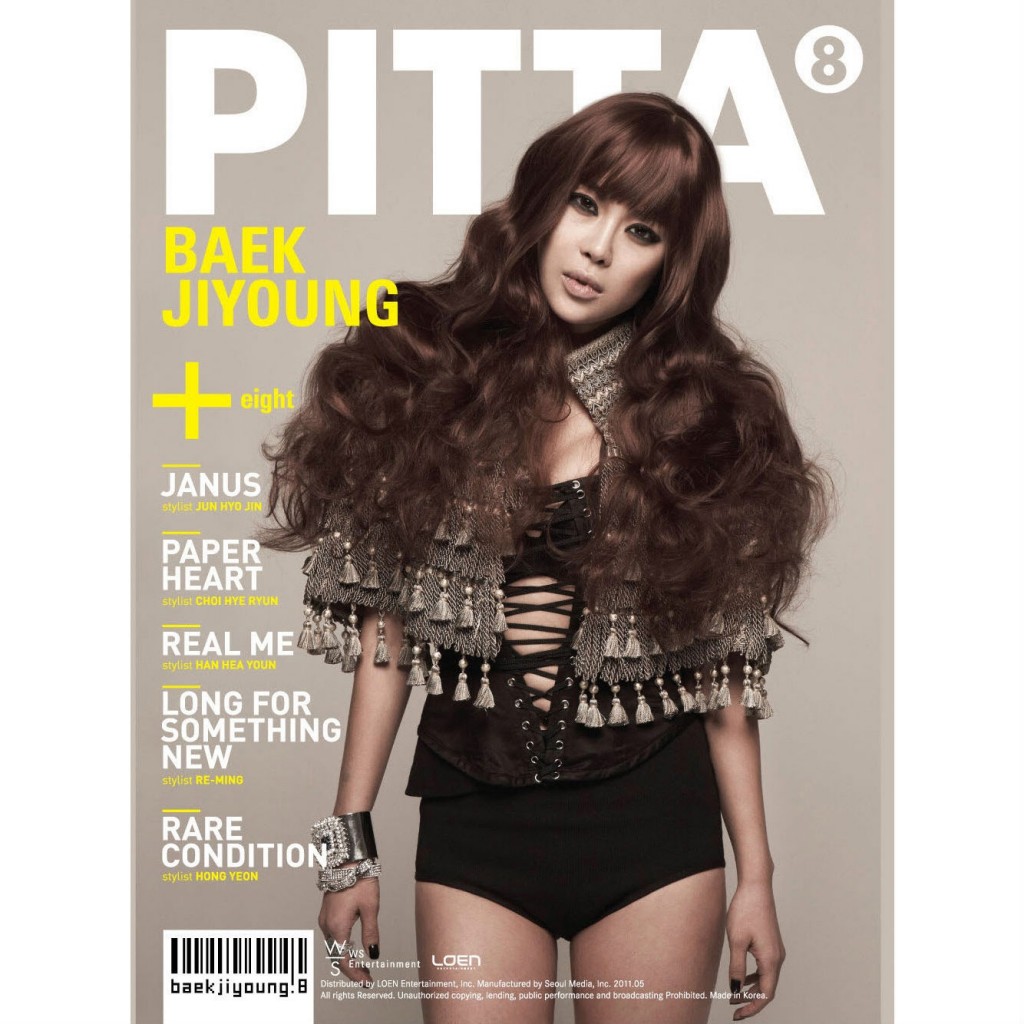 Do you call Baek Ji-Young a ballad artist or a dance artist? Most would say the former, but she was once part of a storied lineage of “Dancing Queens” (concentrations: Latin and salsa), and it’s not like she abandoned the latter genre after the career-saving, “honor-restoring” success of 사랑 안해 (Won’t Love Again) in 2006. Her albums have always contained at least a small selection of uptempo tracks, and Ez Do Dance and 내 귀에 캔디 (Candy to My Ears) in particular were no half-hearted efforts. Although she’s more than established herself anew with a series of wrenching ballads, Baek continues to defy classification with eighth album Pitta.

Let’s get the bad out of the way first. Frankly, I’ve been disappointed by her in the recent past. After Smile Again and its Won’t Love Again, Baek has been undeniably derivative. Remember the songs that followed 2006? 사랑 하나면 돼 (All I Need Is Love), 총 맞은 것처럼 (As If Shot). I’d have been happy to see a return to Dash or Sad Salsa, even, if it meant a break from the tired formula. If you were waiting for Baek to leave that formula behind, you’ll be waiting a little more: Pitta‘s lead single, 보통 (Average), continues the trademark style. The strings-and-band-session instrumentation is intact, and the subdued melody builds up to a sudden explosion at the gut-wrenching chorus–predictable progression for a Baek Ji-Young ballad, from predictable composer Bang Shi-Hyuk (also known these days as Hitman Bang). At least the lyrical approach is more interesting: repetitions of “average” are used to highlight a concept of “special”, in love and pain and among people. I wouldn’t quite call it paradoxical, but it’s clearly a nice way to make the listener think more carefully about a love song. That said, Average doesn’t really give us anything else we haven’t yet heard from her.

Fortunately, that’s actually just about it for disappointing ballads in this album. There are a couple of standouts here in the structure-breaking, piano-driven, also-quasi-paradoxical아이캔드링크 (I Can Drink) and the gorgeously arranged, breezy 시간이 지나면 (After Time Passes). Moody jazz-ballad hybrid Lost Star features a melancholy electric organ tone to accompany the heavy drum and heavier atmosphere. Baek even has the good business sense (I’m assuming that’s what it is, at least) to include her widely praised rendition of the Na Hoon-Ah classic 무시로 (Mushiro; it carries the connotation of “timelessly”, if you want to go there), as performed recently on I Am a Singer, as the closing track. I was a fan of that performance, and it works well here: a lasting aftertaste like the one that this profoundly sorrowful ballad leaves is exactly what Pitta needs.

On to the album’s flip side: there are only three dance tracks this time around, but they pull their weight. Baek’s always skirted the cutting edge when it came to her dance, and in Pitta she moves on from electronica into straight-up house. Sound-wise, 눈은 왜 감는 건데 (Why Do You Close Your Eyes) is the cream of the crop; punctuated, dubstep-reminiscent bass and intricate drumwork support the intoxicating melody and seductive lyrics. Bad Girl, which will probably end up as followup single, is led by a rhythmic piano line and string usage straight out of a techno track, while Love Game marries an outstanding, punchy beat to a somewhat underwhelming melody. All three are novel attempts; the scene could sure use more mainstream artists experiment with house sound. I can’t say that it pays all that much dividends other than in Why Do You Close Your Eyes, though. Still, that one track is good enough to cover the faults of the other two–if I had to choose between having this trio versus not having it in the album at all, I’d go with the former.

The real achievements in Pitta lie less with the music and more with the artist. Baek Ji-Young’s vocal prowess has come leaps and bounds since even 2008′s Sensibility, and it shows throughout the album. There’s no real “kill track” here in terms of a vocal showcase, and maybe that’s just as well. The thing is, Baek is a more complete vocalist rather than a flashier vocalist compared to her former self. We all know how well she sings the tearjerkers; that’s half the artist’s image these days. But consider Lost Star, with its remarkable resignation and solitude; the suppressed emotion in parts of Average; the relaxed whispers of 아무것도 아닌 것처럼 (Like It’s Nothing); the calm yet stormy Mushiro. She pulls them all off beautifully, and carries a few tracks solely by strength of performance. The dance tracks could use a bit of work, and even the generally impeccable Why Do You Close Your Eyes could use a little less power and more finesse. But this is probably the most versatile collection of performances that we’ve seen from Baek Ji-Young. (Also notable is the lack of any featured artists: she does it all herself.)

Pitta is far from perfect–there are some problematic tracks, the organization falls apart in the second half, and the album still drags in general, like her previous outings. But one of the best barometers of an album’s quality is innovation, and other than the fact that Baek Ji-Young is still unwilling to let go of her trademark ballad mold for a title track, I think this album’s got plenty–lyrically, vocally, and genre-wise.  In her mid-thirties now, Baek is still growing as an artist, still experimenting and maturing. She reminds me a lot of Wax, another veteran multi-genre artist whom to this day is trying new things to mix into her ballad base. Some of Pitta‘s tracks could have been right at home in a Wax album. Like her, it’s pretty clear that Baek still hasn’t tapped into all of her potential. I’ll happily take Pitta for now–but I’m waiting for greater things still.