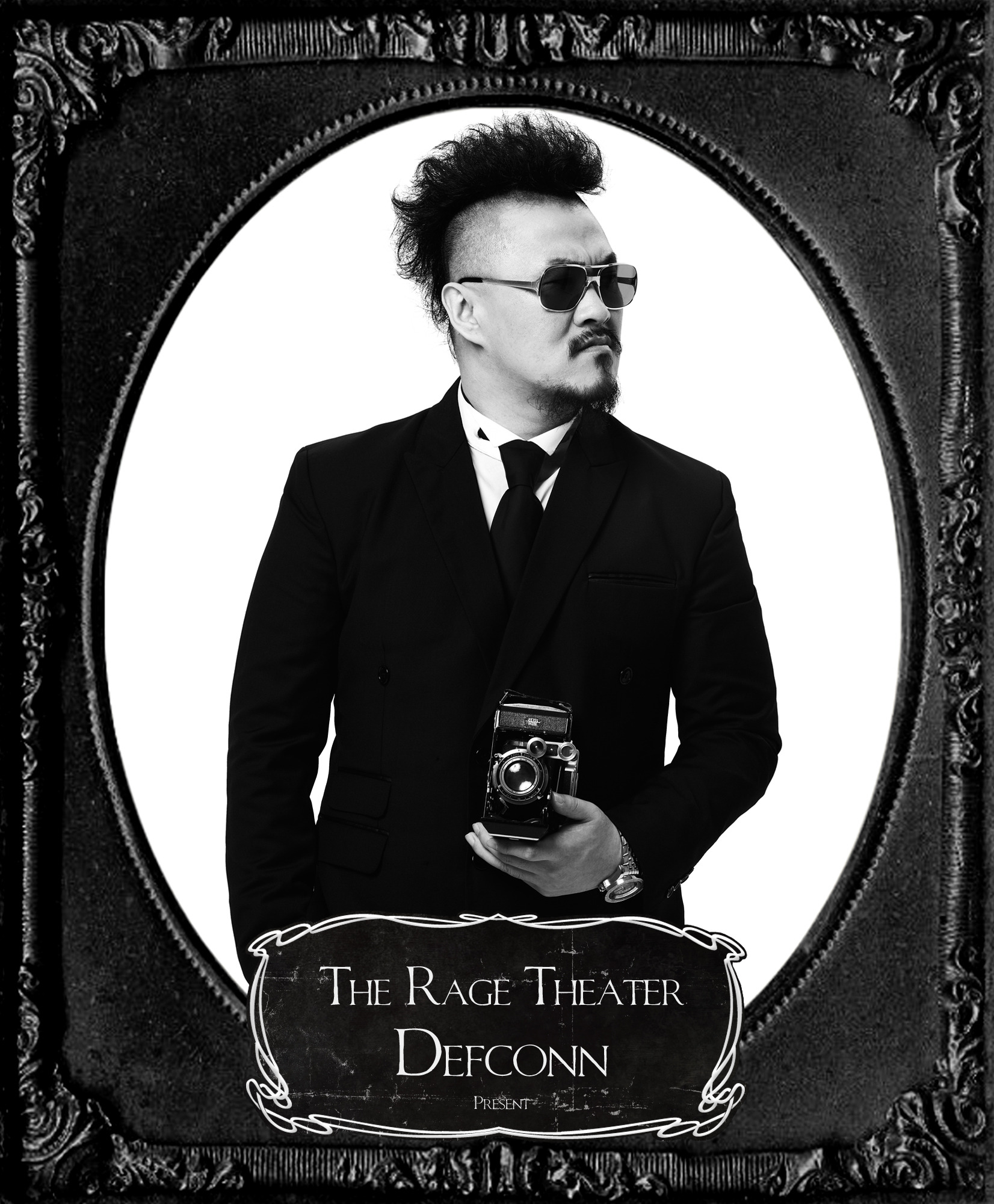 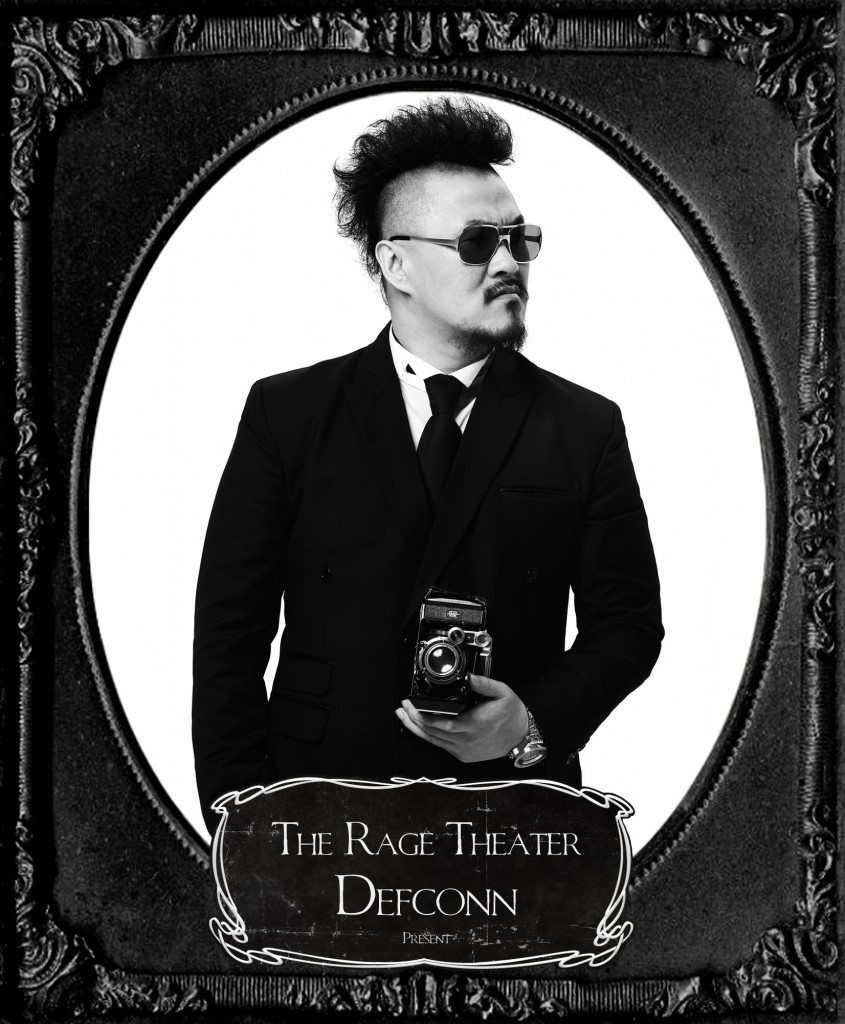 Defconn has made some bold statements regarding The Rage Theater, his fifth studio album. For starters, he said that this will be his final studio album. That’s bold–like Lee Seung-hwan bold. He also said that he wanted to fill “a void” in the scene with this album, and give listeners a distillation of only his best. I don’t know if people took this at face value; after all, Defconn’s previous album and first sign of a break from the mellow, family-friendly hiphop that had become his new trademark, Macho Museum (2010), met a lot of disappointment. But if The Rage Theater proves anything, it’s that the prolifically cursing, viciously honest, unapologetically hardcore Defconn from a decade ago is really back. And it feels so, so right–this is what the 35-year-old does best, and does quite unlike anyone else.

Defconn’s never been afraid to tackle the sketchy stuff in his vivid storytelling, and that streak is alive and well in this album. EVA-N-GELION takes up a host of social issues, ranging from domestic violence to murder, expressing angry frustration atop a paradoxical, naively-happy-go-lucky beat. A Song For Sad Kids tells a heartbreaking story of children subjected to indecent violence, and Sorry Mama paints a bleak picture of the lives of Korea’s despairing middle-class men. Perhaps the most explicit of the bunch, Seoul City Deep Cover recruits the help of Nukupsan, Born Kim, and Tafkah Buddah (not a misspelling–he’s really “Buddah”) as it captures dark snapshots of a night in the heart of Korea, in a manner reminiscent of Epik High‘s Nocturne.

As you might expect, those tracks are actually more tame in terms of profanity. Defconn really lets his trademark run free once he starts telling his own stories. In the hilarious five minutes of 중2병 (Middle Schooler Syndrome), he points out the youth of some keyboard warriors, labeling them as “bread shuttles” (a term for kids who perform chores for bullies) in real life before throwing down on their older counterparts with the real vitriol. UMC‘s featured verse, sandwiched in between, sounds very much like a diss towards Verbal Jint (the two have had a feud over rhyme philosophies), although it may well also be criticism of a more general populace. Dr. Dre tells a devastatingly honest story of the dreams and the reality of a hiphop career. 씨바스꼬장 (Shibaskojang) invents a new, drunk swear word that sums up what it feels like to be treated as low-life garbage by a former lover. (And yes, you do get to hear from the girl, in explicit manner, what she thinks of him.)  And in a return to one of the genres that made Defconn famous, he presents 2011 복까치오 (2011 Bokkatio): while not nearly as explicit as the legendary Sxx Drive, it still more than continues the tradition of unapologetic tracks in Defconn’s more hardcore releases.

That’s not to say that Defconn’s totally abandoned the mainstream. Defconn joked that래퍼들이 헤어지는 방법 Part 2 (How Rappers Break Up, Part 2), the lead single, is just about the only song on this album that will be cleared to play on radio; as such, the track is decidedly commercially-minded. The lyrics are traditional love-song fare (no swearing here), the beat consists of trendy synth mixing and a hook-song melody, among other things, and the chorus is sung by Girl’s Day vocalist Minah. But he doesn’t try to hide that fact, which is refreshingly honest, and fortunately for the song, it’s very well-made–the wistful melody and the played-straight, high-octane verses work pretty well next to each other. Minah’s performance is admirable, and additional arrangement, courtesy of Fraktal, polishes the sound. 리듬을 춰줘요 (Dance The Rhythm), an electropop love track with a retro streak (Defconn parodies the faux-retro of Son Dam Bi‘s On A Saturday Night at one point), and 2011 희망사항 (2011 Wishlist), a male-exclusive reimagining of Byun Jin-sup‘s 1989 classic, round out the softer middle parts of The Rage Theater.

A strong base of beats holds up all this variety. All tracks except Middle Schooler Syndrome are composed by Defconn himself (credited by real name Yoo Dae-jun), and generally follow the slightly old-school feel of heavy drum and almost crude bass and synthesizer. Of course, Defconn’s able to go modern when he wants to–the selection of electropop and sophisticated jazz-tune, as well as the creative editing in tracks like Shibaskojang, are sufficient evidence. Now, there’s a lot of fun experimentation here. Two pairs of tracks illustrate the merits of recycling beats: first, 똥텅랩 (Wack Rap) and 게임의 법칙 (Rules of the Game), both 1:30-long quickies, use the same beat and hook to create a skit-like feel. Then he goes one step further with the two tracks with “2011″ in its title, Wishlist and Bokkatio, drawing intentional parallels by using the same beat with two completely opposite themes and labeling each as a type of film. (The tracks even share the same featured artists–both star Macus.P on vocals, and while I couldn’t figure this out for certain, I think even the uncredited women who provide the amiable dialogue in Wishlist and the moans in Bokkatio might be the same person.) In other beat notes, Dr. Dre shows sampling done right with nicely used clips from the titular artist’s works.

As good as everything else is, The Rage Theater is helped greatly by its concert-worthy team of featured artists. In addition to everybody already mentioned, reggae vocalist Koonta lends that carefree flair to EVA-N-GELION and Dance The Rhythm; R&B artist Yuri (the solo Yuri–not the one from SNSD, and not the one from Cool) makes a welcome comeback appearance on A Song For Sad Kids with an exotic sadness in her chorus. Of course, the crown jewel in this regard is swagger track First Classic; the featured cast is an old-school fan’s dream, starring Daephal, Side-B (whom I actually didn’t even know was still on the scene), both MC Meta and Nachal of the Garion duo, and Joosuc. In addition, the track is managed by DJ Wreckx. Nobody disappoints–verses are top-notch, and a little too short if anything.

The Rage Theater feels like a huge gift package from Defconn. It’s got a little bit of everything that makes this artist, spread across an impressive display of both diversity and cohesion. Sometimes, he swears and cries out for the realities of today’s society, in frustration and pain; sometimes, he swears just to be aggressive and because he can. He raps about supreme joy and profound love, just as he raps about the darkest recesses of the human mind. The one constant? He does it all without abandon. 10 years of music, 35 years of life. They’re the source of his rich, often funny, always very human tales, as well as the source of his confidence and assurance. The Rage Theater celebrates perhaps the liveliest, heartiest rapper of this generation, as it closes a chapter of Defconn’s career.