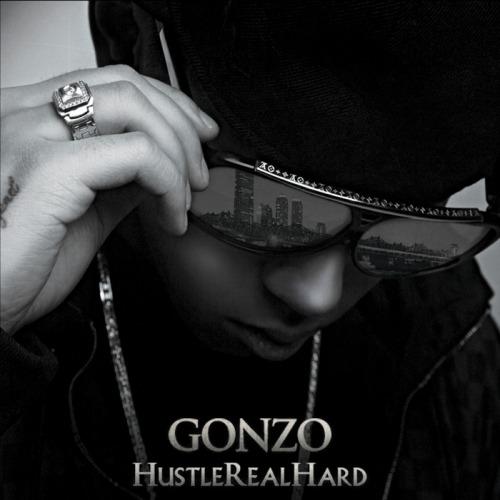 When you’ve been in this business for ten years, I imagine that the whole game slows down for you a little. That’s probably the case with Dok2 (also known as Gonzo, as well as a host of other stage names); the twenty-three-year-old already has a lofty reputation among hiphop listeners, and he’s only been increasing the hype recently by establishing 1llionaire Records with The Quiett in January and releasing a few tastes of singles. At this point, Hustle Real Hard, Dok2′s first full-length studio release, has some big expectations to live up to.

Dok2 has an immediate distinction going for his album: Hustle Real Hard is a southern album from the ground up. There’s really no Korean artist out there right now that does this genre right; Crown J announced that he would be switching over to dirty-south back in 2008, but so far we’ve got one track from him in D.O.-produced I’m Good. Even that left some things to be desired. Kinetic Flow is still tinkering with g-funk, and hasn’t been very active to begin with. So the style is definitely fresh, and to Dok2′s credit, this is no fluke. He’s experimented with similar genres in the past, and showed promising signs of quality. Hustle Real Hard takes that one step further: we begin to hear a definite, cohesive flavor of Dok2′s own dirty-south. The work that emerges is solemn and tough–Dok2′s got plenty of attitude to show.

From the get-go, intro track 1llionaire Begins features a grand brass-and-strings beat atop some very well-split drum. (This intricate beatwork stays top notch throughout the album, and is easily one of the album’s strongest suits.) The uncomfortable atmosphere, the creeping phaser sound, the unbridled swagger emanating from Dok2′s nonstop soliloquy; we’re in lightly-charted territory here. And Dok2 just keeps going deeper.

That doesn’t mean that Hustle Real Hard is all hardcore, all the time. In fact, aside from I Am What I Am and Q.W.N.A., Dok2 stays away from the heavier spectrum of the genre–it’s not his intention to turn the album into a gangsta-rap release. Much of the album is written in lighter lead. That includes tracks like That’s Me, a sequel to previous single It’s Me and performed with Rado again, which is a melody-heavy, piano-based hybrid (it also shares about the first half of a chorus with its predecessor), and On My Way, which follows in much the similar vein but gives Dok2 more room to play lyrically.

That mold also includes lead single My Love. The track is definitely the most radio-friendly of the bunch; clean, rousing synthesizer echoes across a well-split beat, as Dok2 takes a break from the brag front to throw down a more normal love song. Jay Park, who seems to be best friends with Dok2 these days, contributes a soft chorus and hook. The sweet, streamlined melody doesn’t cut corners, and is produced well enough to easily surpass a lot of mainstream electronic-pop tracks in both immediate appeal and addictiveness.

No hiphop album is complete these days without some sweat-and-stick slow jams, and Dok2 finds room for a couple here. While a little more PG-13 than the norm, My Girl is still a standout; it gets both the indecent and the smart in. The groove in the double layers of piano are tremendously moody, the g-funk atmosphere is thick enough to cut with a knife, and Dok2 writes some devilish standout lyrics here. Come Closer/Flow2Nite, the more explicit indecent track (and a double track at that), is also solid, although the decision to combine its components into track is questionable.

Apart from the rare novelty of hearing some of this stuff done in a Korean album, Hustle Real Hard gets more interesting in the tracks that infuse distinct elements into the southern-rap base. 음악을 멈추지마 (Don’t Stop the Music) and 절대 (Never) are examples of this endeavor: both take pop and neo-hiphop elements such as reverse-beat and traditional Asian chord progression and marry them with the gloomy synthesizer and gravitas permeating the rest of the album. The effect is both jarring and complimentary. (The latter track also benefits from a chorus by Yang Dong-Geun, one of the best in the country at performing attractive hooks.) It’s a clever concept, and one that yields some cool sounds, but it doesn’t pan out very much beyond the two tracks.

All this basically works out to be an embarrassment of riches in terms of sheer sound quality and quantity. But alas, nothing can be perfect, and the second part of that is actually problematic: there’s simply way too much stuff going on by the end of the album, and it’s presented in a way that makes it all even more overwhelming. Listening to a few well-produced, synthesizer-heavy, swagger-and/or-anger-filled tunes is one thing. But Hustle Real Hard does this over and over and over again, to the point where there are stretches of the album where the listener is just being bombarded by the ringing, explosive beats for minutes on end without room to catch a breath. Perhaps this was inevitable considering the composition of the tracks here. In that case, even throwing in a lighter tune like My Love in the middle of the more strenuous stretches would have helped alleviate the stress levels a bit. Remember that this is a pretty long album, at fourteen tracks; a few changes in layout could have really changed the feel of the whole piece.

Dok2′s rapping contributes a little to that problem as well. His grudging, irritated rap tone has always been a polarizing factor: some love it, some can’t stand it. Without going into that debate, Dok2′s rap is certainly not the easiest thing to listen to for extended periods of time, unless there’s something done to spruce things up. Unfortunately, that extra something-something is lacking for the most part in Hustle Real Hard. Dok2 can certainly do some great rhymework and write great lyrics, and his delivery isn’t exactly deficient, but it’s pretty much the same old swag-juice, tough-front attitude and the same old suppressed, slightly-choppy flow throughout. Granted, this is an artistic decision left to the rapper; however, with a rap tone like his, Dok2 would probably benefit from some alternate approaches to delivery. As it is, the variety of rare featured artists such as Soulja Boy (albeit not with very pretty results) and The Quiett in addition to the above-mentioned, is what makes up for the relative vocal monotony.

Hustle Real Hard is a project. It’s not perfect by any means, but of course it doesn’t have to be. The significance lies in the fact that Dok2 proved, without a doubt, that Korean hiphop artists can craft sound like this in full independence now. As it stands, this album is probably one of the most unique-sounding in Kpop at the moment, if only because it succeeds so well in replicating genuine southern hiphop as well as giving that a personal flavor. The album does a lot right, and it does some extraordinarily well. True greatness will have to wait a little while. But you know what? Like Dok2 spits in his intro, it ain’t nothin’ to a boss. With that spirit, he’ll get there.