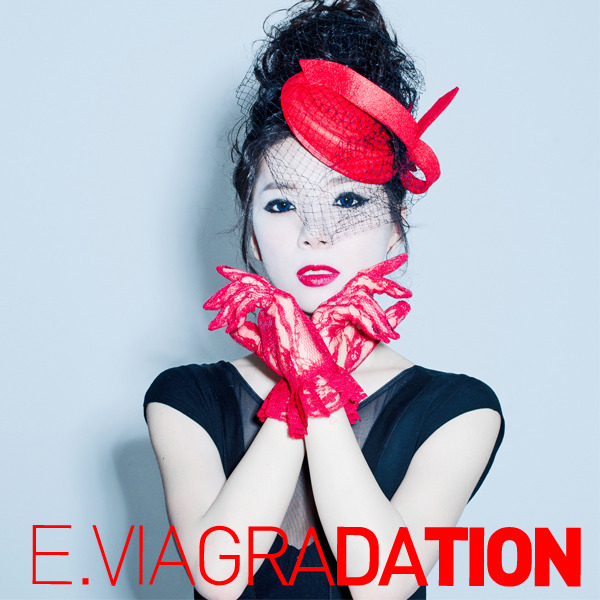 By Jung Bae | May 13, 2012
FacebookTwitter
SubscribeGoogleWhatsappPinterestDiggRedditStumbleuponVkWeiboPocketTumblrMailMeneameOdnoklassniki

Let’s be fair to E.via. In all honesty, she carries a heavy, heavy burden. As one of the very few mainstream female rappers in Korea capable of technically rigorous lyricism, she’s a rare talent. Add in the fact that she’s proven her delivery as solid (and certainly fast), and that she’s already had eight years of experience on this scene, and the expectations go sky-high. People want her to fill a sorely empty niche. Therefore they want her to be great. In doing so, they unconsciously set a different standard for her. Perhaps an unfairly high one.

But it is also true that E.via’s work just hasn’t been good, by that or any other standard. There were flashes of low-tone, versatile brilliance during her underground days as Napper. But since becoming E.via, her work has ranged from fairly decent to disappointingly exploitative. In terms of production (and displayed skill), she has a ways to go before catching up to Rimi, let alone to Yoon Mi-rae. Her discography since 2009 gives the impression of an artist perennially trying to find her footing, but never actually doing so.

At the very least, E.viagradation Part 1 does not suffer from that last problem. This short EP is finely focused on one topic – obsession. Its ominous instrumentation and morbid lyrics chart new ground for E.via, and it’s a welcome departure. Horrorcore rap in the Eminem mold is still relatively hard to find in this scene (barring dabbles by Fana, DJ Son, and some others), and in E.viagradation we have a courageous foray into this uncertain genre.

In terms of atmosphere, E.viagradation Part 1 is superb. Opener 그래서 난 죽었다. (Thus I Died.) employs a variety of sound effects, ranging from panting to an irregularly beeping heartbeat monitor to distant exotic vocalizations, to embellish its already disturbing orchestra-and-electronic heaviness. Actress Seoson (she appears in the music video of Insane Fate) additionally contributes some narration here, although I’m not convinced that it’s necessary – the music says plenty without it. The rest of the album is just as pregnant with foreboding, and producers Keeproots and Artisan Beats do a good job fending off monotony with constant adjustments of tempo and motifs.

Their efforts bear sweetest (or most bitter, given the subject matter) fruit in 밤에 피는 장미 (Nocturnal Rose), which is essentially a twisted stalker’s diary. E.via is as good as she’s ever been here: you won’t hear the breakneck speed that she’s been known for, but she make brilliant use of her penchant for melodic flow. She whispers, hums, and seduces while maintaining a sophisticated rhythm, and the technique proves effectively unsettling. There is a sense that her performance still isn’t quite deranged enough to justify the extent of the narrator’s obsession, but I think she does find a good spot between over-the-top and uninteresting. The relentless strings and sinister-sounding piano are sublime all the way, and the producers even put in a dramatic transition (props to whomever gets the source of the “scream” sound effect, by the way) before BaeKyoung‘s verse adds the opposite perspective to the story.

And then there’s lead single 미친 인연 (Insane Fate), which manages to cancel most of this out. It’s cluttered with unnecessary layers of sound which mask a weak melody and beat – the pitch-modulated electric piano provides a pervasive gloom, but the rest of the instrumentation is predictable and clichéd. M.C. The Max‘s Isu makes a controversial appearance, his first in a song since that 2009 arrest and scandal; that issue aside, while his chorus does come across as monotonous, that’s more because of the song’s rickety composition than Isu’s performance. At this point, the song is already in a deep hole, but E.via’s rapping is just as disappointing – her overly charged voice floats jarringly above the beat, and the speed sections are poorly done to the point of incomprehensibility.

It would be one thing if Insane Fate was one subpar track in a lengthy album. But this EP is even shorter than the “Part 1″ moniker would have you expect – once you take away the instrumental tracks and interludes, there’s a whopping two tracks left, and I’ve just discussed both. When the focal point of an insubstantial album (and a heavily thematic one, no less) tanks like this, the excellent setup provided by all the elaborate narrations and moods goes to naught. It’s a very regrettable outcome.

So no, E.viagradation Part 1 isn’t the album to finally vault E.via above the high bar. Things look optimistic, however. The rapper is currently recording Part 2, which presumably will combine with this EP for the full experience. Part 1 excels at setting and sustaining this atmosphere of madness, and its main problem is that it’s simply incomplete. I hope E.via will use what she’s built here – add more tracks, more stories, more substance to the platform that Part 1 is. If this is the case, I’d be very surprised if the final product is not great. Then again, Part 2 could be something totally different. (The use of colors in the album title seems to hint at that.) In that case, all bets are off. But until it’s released, the jury is still out on whether the completed E.vigradation will be Korea’s seminal horrorcore album, whether Part 1 would become more than just a bundle of potential, and whether E.via will conclusively prove the naysayers wrong.