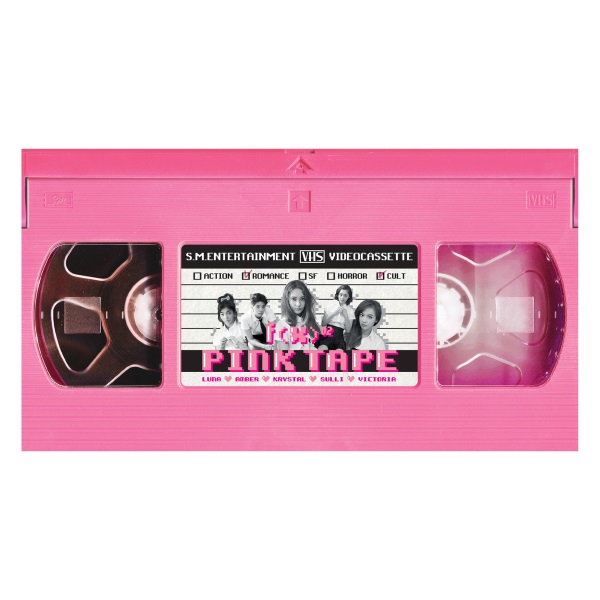 Let’s talk about the Pink Tape art film for a minute. Without any other knowledge on the album proper, I thought the short film was a hint that F(x)‘s sophomore album would be delving deeper into the subtly disfigured, disturbed psyche that Pinocchio (2011) lightly brushed with. Krystal‘s cryptic narration, cinematography occupying a great space right between artsy and pretentious, and incredibly fitting choice of music made it clear that the teaser was targeting a ‘high-art’ feel to go along with the actual musical product.

Turns out the teaser is not that indicative of the album proper. In terms of theme and narrative, Pink Tape isn’t particularly adventuresome. Aside from one notable exception, it does not bother with the aforementioned disturbed character angle, and it doesn’t pick up the group’s trademark quirky attitude and deconstructionist language that culminated in last year’s Electric Shock.

I’ll deal with this in more detail below. Now, the album does make up for the blander thematic showing with a no-holds-barred approach to sound quality. The palette of Pink Tape is familiar: a synthpop base with some hard electronica elements and a focus on velocity and detailed fidelity. It’s a sound that SM Entertainment‘s engineers and its recruiting pool of in-house and European composers have already basically perfected (primarily through F(x) and SHINee, but also with other teams), so we’re not exactly being surprised by anything. At this point, the fun is in exploring what novelty the album presents on top of a certain guaranteed level of quality.

The most audibly striking tracks are loud and proud. Airplane seems to me the clear headliner, combining a bold house texture with breathtaking melody and just a pinch of the surreal. Signal is an effective retro number armed with attractive hooks and nostalgia-inducing disco devices, and Toy has an explosive dubstep-string breakdown to accompany its disjointed quirks. Speedy Kick and Step complete the synthpop-driven sonic core of the album. The polish is immaculate, save for perhaps the structure of Toy and an un-Hitchhiker-like shortfall in the melody department of Kick (even for a rhythm-oriented track). The album’s later tracks aren’t quite at this level (coincidentally, as the palette moves away from electronica), but they don’t hurt it terribly.

Of course, this isn’t an F(x) album if the five members aren’t there. That’s neither tautology nor platitude. More so than any other idol group, the presence of F(x) is crucial to making their albums work. In 2011’s Year in Review series, I wrote on the shuffling of traditional vocal roles within girl groups – the list at that time included 2NE1 and Wonder Girls, and F(x) was there as well. Sub-vocals Victoria and Sulli aren’t really given the leading roles like CL might be for 2NE1, which is just as well; instead, their conversational style is a building block of atmospheric tracks like Shadow and indispensable contributor of Step’s hooks and parenthetical interjections. Amber sees plenty of productive time at sub-vocal herself, in addition to doing interspersed 4-bars that seem way too short given what she makes of them.

On the other hand, I think the main vocals don’t stand out in Pink Tape’s most interesting tracks – which is a shame, when you think about the way Luna‘s field day on Pinocchio helped to really make that song. They do get to try some new things on No More, Snapshot and others, ranging from theatrical projection to friendly banter à la SNSD‘s I Got A Boy.

Speaking of banter: as mentioned above, the lyrical style of F(x) has changed. This group is moving past the verbal deconstruction and sensual bombardment approaches and cleaning house. In none of these twelve tracks do we see made-up words, extensive onomatopoeia, or over-the-top randomness. Done right, these were legitimately enjoyable and part of a deviously clever branding strategy that helped F(x) get to where it is, but they can’t last forever.

As sensible it is, that’s a pretty big identifying characteristic gone right there. The insanity of old was home to wordplay, wit, attitude; the themes that replace all this are, for the most part, not as memorable. The album doesn’t take the opportunity to explore something new, at least not cohesively. There are still good lyrics around – tracks like Goodbye Summer and Airplane appeal with fanciful settings and gorgeous imagery, while Dana‘s No More wins with wit – but merely good isn’t what we’ve come to expect from F(x).

The exception is the collection of bright ideas and special lyricism found in the first three tracks. Shadow, the intriguing background track to that art film, is really the key. The song opens with lithe bells and amicable melody. But look at this first verse, translated from the original Korean:

Every day, unknown to you I follow your footsteps
Always careful, so that you wouldn’t notice me
No words necessary, our date still begins
A date for just us two

So it seems like the narrator is stalking her target, and the impression only grows from here. (I can’t quite do justice to that third line, but it’s very cleverly worded.) It’s unclear whether the narrator is actually a physical shadow who has grown fond of its caster; that’s probably the intended interpretation, judging by lines like “Don’t be scared, we are a union forged by the sun // Destined to be together”, but the song could also be read as the metaphorical rationalizations of an attached individual. Regardless, extrapolating either of these interpretations does call for a closer (and more engaging) listen of the song. Lyricist Jeon Gandhi did a tasteful job: the implications are easy enough to find that a cursory glance at the lyrics should suffice, but subtle enough that those slight sound distortions, off-tune bells and discarded remarks mean something more the second time around.

Lead single Rum Pum Pum Pum (also written by Jeon, who seems to be on the upswing since her work with SHINee) is not so overt, but the same idea is there. This time the narrator compares her status as someone’s first love to a wisdom tooth, which leads to several interesting metaphors. (“They say this and that but you won’t know until you experience it // Even if you pull me out you’ll leave my spot forever empty”, and so on.) The mock-spellcasting harmonics near the end are icing on the cake. Meanwhile, Pretty Girl builds a promising backdrop that turns tension between the narrator and an arrogant “pretty girl” into a fairytale witch-and-princess dichotomy. (However, it seems like the concept was too ambitious to fully resolve in a short track.)

Seeing these tracks, clearly F(x) and SM had the capacity to make Pink Tape a bit more thematically intense, and that idea must have been at least entertained (see the teaser). That they didn’t seems like a safety-minded decision. Hyping with an artsy teaser is a lot easier than selling an entire album full of niches, after all. In a frankly unfair way, that makes Pink Tape a slight disappointment; it had the potential to be a landmark piece of work.

But give credit for the ways in which Pink Tape is, in fact, intrepid. F(x) is a team that has consistently expanded the edges of what is possible for an idol group to accomplish, and that does happen again here. This is a technically exceptional and viscerally enjoyable album, one of 2013’s best. Yukari and Rainbow99 have led a strong dream-pop advance in Korean electronica this year, but Pink Tape is good enough to single-handedly challenge them.

At the same time, Pink Tape also sets up F(x) nicely for the future. Experimentalism concerns aside, this is probably the best balance between mass appeal and genre excellence that the group has struck, with no sacrifice on either end. My one complaint, if it could be called that, is a want for even more thematic risk-taking, and that’s something the group can certainly explore in coming years. In fact, if any idol group will do it, I think it’s going to be F(x). The functions continue to chart the frontier.

Sources: Photo – Daum Music; Videos – Mnet, SMTOWN on YouTube
All lyric translations are by the author.