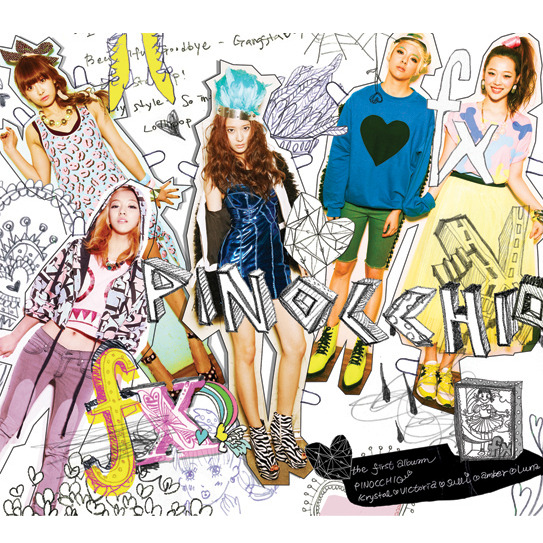 It’s always nice to see (erm, hear) artists enjoy themselves. F(x) has always delivered that in droves–playful vocals and spunky attitude were defining characteristics of debut single La Cha Ta, just as they were for almost every subsequent major release. Not ones to mess with a good thing, SM Entertainment seems to have its mind set on having its younger girl group carry this image for a while, because F(x)’s first studio album Pinocchio continues both traditions.

You’d think that formula would have gotten at least a little worn by now. Fortunately, F(x) manages to make it sound brand new again. That owes more than a little to the fact that from beginning to end, Pinocchio is full of novel ideas and encouraging signs of experimentation to a degree seldom seen from an idol group. This isn’t a half-hearted attempt at forcing a square peg of variety into the proverbial round hole; rather, Pinocchio sounds and executes like a project that actually intends to push the envelope. Whenever the album isn’t as innovative, it makes up with the group’s innate uniqueness.

Lead track and lead single Pinocchio is exemplary of that latter part. Essentially, this is F(x) redux, in that it’s driven by the group’s trademark traits. Of these, the rather creative lyric writing is the most apparent. If you remember, several previous outings, such as NU ABO, used onomatopoeia as well as imaginary words to fill in rhyming schemes and color up the track. Normally I’d call it lazy writing, but it always seemed to fit this group’s character in an odd way. Pinocchio takes it one step further: made-up words appear sparingly, yes, and the mixing of formal and informal tones adds flair, but it’s the outlandish metaphors that steal the show. Over the song’s duration, the five girls reference emeralds, scanning, pastry, doctors, Christopher Columbus and the New World, a doll, and a key to a maze; and that’s just part of it. It’s to the point where it’s easier to look for lines that don’t involve such a metaphor than those that do. Whether this kind of writing is creative or just juvenile will be up to each listener’s preference. But it’s definitely more than meets the eye: the chorus “Dda ra dda ra dda dda dda // It’ll sting and shock // So full of curiosity // Don’t you dare move // Piece by piece, dda dda dda // I’ll take you apart, dda dda dda // And put you together the way I like” reads like an intentionally chilling contrast to the happy-go-lucky overtone.

The unique chorus intonation is also alive and well in Pinocchio. (We’re still talking about the song here.) This effect can get old really quickly if overdone, but it’s thankfully moderated in this track, and ends up being just a playful quirk. The instrumentation, prepared by Hitchhiker, doesn’t differ radically from anything we’ve heard, although the synthesizer is noticeably heavier than before, and there’s a nice touch with subtle guitar sounds. It does end up taking a back seat to the five girls’ performances–this kind of track appears to be their forte. Vocalist Luna, in particular, sounds as vibrant as if the song was made for her, and Krystal is prominent in the chorus. The melody is fiendishly addictive, and the track seems to be having no trouble charting well at time of writing.

The innovation part kicks in as the album moves on. 빙그르 (Binggeureu) takes a retro rhythm that wouldn’t be out-of-place in the 80s and joins it with another spunky theme, this time about a magical elixir. The Korean title as well as the vast majority of the chorus are, again, onomatopoeia. (If you’ve lived in Korea, the word may unintentionally remind you of a milk brand of similar pronunciation as it did for me. But I digress.) 아이 (Child) opts for a melancholy turn, and delivers an eerie heartache of a love song upon a moody beat. There’s energy and seduction cohabiting inside Dangerous, and a rare, bold swagger in the brass-heavy tango and unapologetic performances of My Style.

There’s even room for a couple ballads, in Beautiful Goodbye and So Into U. The former, in particular, is a cover of Kasey Butler‘s song of the same title, and it’s a good selection on the producers’ part. While this group doesn’t quite have the vocal prowess or a capella capability that CSJH the Grace had, its performance in Beautiful Goodbye is nevertheless reminiscent of that senior group; there’s room here for F(x) to harmonize expansively atop the breathtakingly sweeping instrumentation. It leaves an interesting possibility for future albums.

The quality slips here and there–while rapper Amber shines in Gangsta Boy, for example, the track as a whole utilizes unnecessary auto-tune and isn’t as tightly constructed as it could be. Stand Up!, performed with indie band Peppertones, tries to be interesting with instrumentation at first, but inexplicably stops doing so afterwards and degenerates into more mundane fare. But F(x) carries even these tracks to an extent, and that’s a compliment not usually paid to most dance-pop artists–not just idol artists.

Pinocchio (the album now) is charming, quirky, and clever. But more than that, every bit of it oozes class. That may sound like a curious thing to say about an album that can be so silly at times–one that appears as if it doesn’t really try. And there’s the genius of it – F(x) and its producers make Pinocchio stand out by its own virtue, of quirk, duality, or whatever else you want to call it, rather than by forcing a traditional girl-group album to be different.

F(x) already had a distinct identity, and it was a simple step to let it manifest into an album’s identity. That’s why this album has personality behind it. Everything revolves around that–the production team tailored Pinocchio‘s composition and progression so that it maximized the artists’ strengths, while lyrics were written to emphasize the kind of flavor that F(x) had developed over the years.

For an album that was probably just as much a corporate project as it was a work of art, Pinocchio is deviously good. It measures up to the works of more acclaimed artists. And it’s the best idol-group album released in recent memory, if not the the best in years.