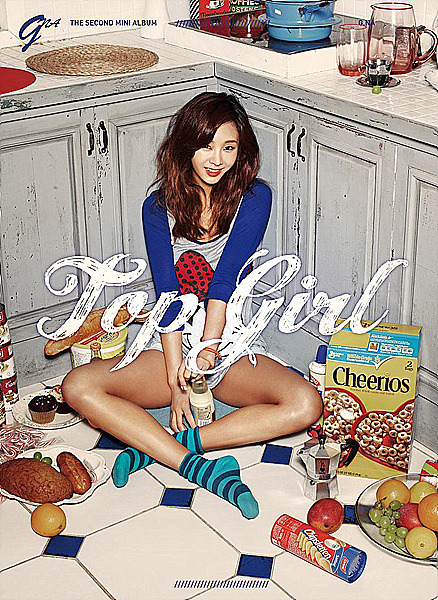 The worst thing about Top Girl isn’t that its tracks are bad. Rather, it’s the fact that there’s so little to say about it. This is sad, given G.Na‘s promising debut last summer (a lot of folks thought the entirety of Draw G’s First Breath was bland, but I was enthralled by I’ll Back Off So You Can Live). This sophomore EP – Black & White was a full studio release, remember – is trendy, mostly polished, and sure to chart really well. What it lacks sorely, though, is imagination and a desire to be something more than just the latest fad.

The EP does have one standout track, and if you’ve listened to it, you can probably guess which. But let’s save the best for last. Top Girl‘s other four tracks are decidedly mediocre, none less than the eponymous lead single. Top Girl (the song) borrows a lot from the tried-and-true teen-pop formula, from the heady party atmosphere to the bubblegum lyrics to the ever-subtle pop rock instrumentation. Its pacing is nice, and G.Na’s vocals are solid enough to carry the song for a bit, but the track succumbs to monotony after the first chorus. A less-than-engaging melody and trite soundset can only take a song so far.

싫어 (Hate You) features a more attractive hook, but that doesn’t save it from the same problem as Top Girl: the lack of anything new or truly interesting to define the track. Without You, the sole ballad, is inserted as a change of pace, and confirms what we already knew: G.Na is a pretty good ballad vocalist, just not one with overwhelming track presence. The track itself is fairly pedestrian fare, combining dramatic, string-heavy instrumentation with a smoothly flowing melody. It’s less medium-tempo-influenced than I Already Miss You was, but I’m starting to think that that kind of mellow pop-ballad hybrid fits G.Na better than a straight traditional ballad like this one. Closing track Icon tries some potentially interesting things with the instrumentation: aggressive, slashing rock sounds and provocative synthesizer contribute sparks and glimpses of something great. Unfortunately, the track ends up suffering from a glaring lack of atmospheric coherence, mainly due to capricious mood shifts and glued-together melodies. This one could have been special with a more focused approach. If only.

So that’s the run-of-the-mill. It’s really too bad that most of Top Girl is so uninspired, because Banana, a thrilling club track co-starring Swings and JC Jieun (formerly just JC) and this EP’s centerpiece, could use a better supporting cast. It’s really, really good. The split beat and icy synthesizer impress with the first note and never look back, mixing in a little grandiosity with timpani and subtle synth-string. The chorus is one of the best in recent memory: its subtly retro-feel melody is engaging, and the “banana bananas” hook is criminally addictive. The style is reminiscent of the late U;nee‘s work (see Call Call Call), and also a little of old-school Chae Yeon in 둘이서 (Two Of Us). That second comparison might just be the incessant “na-na”s in Banana drawing inevitable comparison, but I also think there are tangible similarities in sound philosophy.

The track’s lyrics are strong, as well – Verbal Jint‘s expert skill portrays G.Na with confident hubris without overdoing it. Even better is the fact that G.Na took very actively to writing her song, unlike a lot of her peer artists; I hear that the so-cheesy-that-it’s-good chorus rhyme “머리에 쥐나 // 나는 최지나” (“I’m getting head cramps // I’m Choi Gina”), a mild play on the rhyme between the word for “cramp” and her own name and also the line that was cited as “inappropriate” in the completely ridiculous decision to ban this song from minors (that’s a story for another time), was G.Na’s own creation. Swings is, well, Swings, putting in his usual charismatic performance, and JC Jieun contributes good chorus embellishments. It’s three and a half minutes of near perfection in club-dance, one of the best of the year so far.

Given that kind of excellence, it’s difficult to imagine how Cube Entertainment could have faltered so much putting the rest of this EP together. Part of it probably has to do with G.Na’s relative lack of artistic identity at this point, but she’s now released at least two tracks that, to me, fit her strengths very nicely: I’ll Back Off So You Can Live and Banana. Why push an artist on the rise into so many forgettable tracks? When HyunA‘s Bubble Pop! came out two months ago, Cube demonstrated an ability to experiment in constructive ways, even with an eye for the trendy and popular. That kind of visionary spark is missing in Top Girl, and so G.Na’s proclamation in Banana – “This is the real me // I want to stop acting now” – becomes unintentionally tinged with irony.