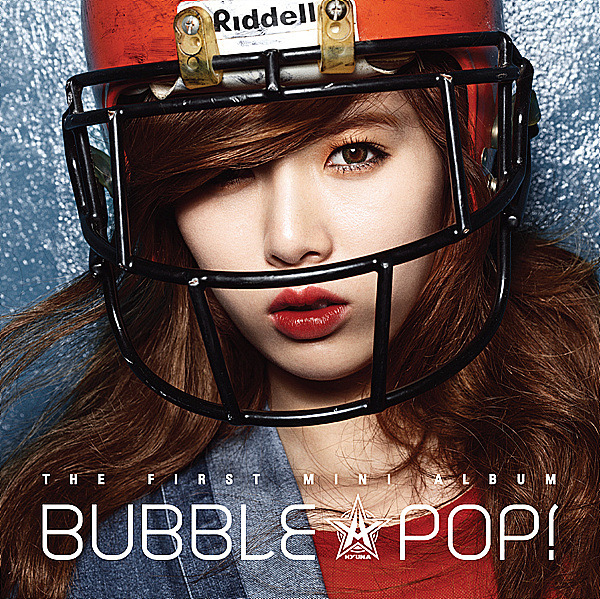 After the release of Bubble Pop! earlier this month, some listeners have ventured to say that HyunA is the next Lee Hyori. I can’t say that with certainty yet, but it’s clear that this nineteen-year-old has the potential. Not that HyunA is any more technically talented or musically gifted compared to her peer artists; no, it’s that she has all the intangibles. Even with the potential handicap of being a girl-group member, she’s attained a stage presence and musical charisma that even older artists often lack. Her rap skills are average at best, but she knows how to take over a track. You can’t teach that.

That’s why Bubble Pop! stands out from the rest of the pack of idol albums. It has unmistakable personality. Cube Entertainment is nothing if not interesting in its album production; after the uninspired effort in the 4Minute album 4Minutes Left earlier this year, Cube has allowed some experimentation for that group’s frontwoman (technically she’s not these days, but frankly she may as well have been). The result is a five-track kaleidoscope of an EP. The variety is certainly welcome.

Lead single Bubble Pop! is, well, its namesake in terms of genre. It’s got a summer-friendly, lighthearted melody and some upbeat band-music instrumentation to boot. The lyrics are of the irresistible teen-love kind, and the fairly engaging chorus does a good job of staying within HyunA’s vocal range and sounding nice while at it. It’s a solid, if not very memorable, piece of bubblegum pop that sounds pretty different from most of today’s idol music. (There’s a weird dubstep breakdown in the middle for some reason, but it doesn’t ruin the track or anything.)

Downtown improves things, with a potent, brooding electropop beat finding a satisfying outlet in a speedy and addictive chorus. The lyrics take a page out of Ke$ha‘s Take It Off, and add an almost poetic dimension to that track’s depiction of heady nightlife. (Although, this one’s probably just asking for a parental advisory warning with the excessive moaning and all. I’m not a fan of that censorship system–I’m just saying.) On the other hand, ballad track A Bitter Day, which was pre-released as a single and turned Cube fans’ heads by inviting G.Na and Beast‘s Yong Jun-Hyung, is underwhelming. Neither the instrumentation nor the melody are engaging, and the chemistry within the track isn’t really that great, either: the three artists, while giving pretty good performances on their own, don’t seem to be trying to complement each other at all. It doesn’t help that all three’s tones stand out too much against the austere piano backdrop.

If A Bitter Day turned Cube fans’ heads, Just Follow turned under-hiphop fans’ heads. Dok2 wrote and composed this dirty-south swag track, and contributes a verse and hook on it. Regardless of quality, this is a really interesting track: when’s the last time you’ve heard dirty-south rap on an idol album? And being a Dok2 production, the song doesn’t skimp on the beats front. The ominous synth and electronic gravitas are all legit. Sadly, I don’t think HyunA was ready for this: Dok2 had to write HyunA’s entire verse for her (it contains classic Dok2 touches everywhere from rhyme scheme to expressive style), which would be blasphemous to many hiphop fans, and she doesn’t even pull that off very well. Her rapping is noticeably more subdued compared to the trademark charismatic verses found in other songs, and it’s pretty clear that she was essentially just going through the motions when recording this. Although it’s fun to hear HyunA’s mild diss on Lee Hyori when she says “내게 필요한 건 10 minutes? 4minute // 딱 4분이면 돼” (“What I need is 10 minutes? 4minute // Just 4 minutes is enough”), it doesn’t change the fact that if it wasn’t for Dok2′s verse, Just Follow would have been a completely missed opportunity.

So, talk about variety, yeah? The best thing about this EP is that every track, good or bad, serves as an overt showcase of this individual named Kim Hyun-Ah. It shows listeners a pretty wide range of what she’s capable of doing, and is infused with that HyunA style; and while nothing in the EP is a classic or even a memorable track, the results are pleasing on the whole. Compared to the middling success of solo debut single Change, Bubble Pop! is a marked improvement. We could be seeing here the makings of a brand-name artist like BoA or, yes, Hyori. I still stand by my hesitation to name her Kpop’s next icon, but I think the name is thrown in the race.

Hellokpop, as an independent Korean entertainment news website (without influence from any agency or corporation), we need your support! If you have enjoyed our work, consider to support us with a one-time or recurring donation from as low as US$5 to keep our site going! Donate securely below via Stripe, Paypal, Apple Pay or Google Wallet.
FacebookTwitter
SubscribeGoogleWhatsappPinterestDiggRedditStumbleuponVkWeiboPocketTumblrMailMeneameOdnoklassniki
Related ItemsBubble PopCube EntertainmentDok2G. NAHyunaJun Ji-yoonReviewUniversal Music KoreaYong Jun Hyung도끼용준형전지윤지나현아
← Previous Story Album Review: Shin Hye-sung – The Road Not Taken
Next Story → Album Review: 2NE1 – 2NE1 2nd Mini Album