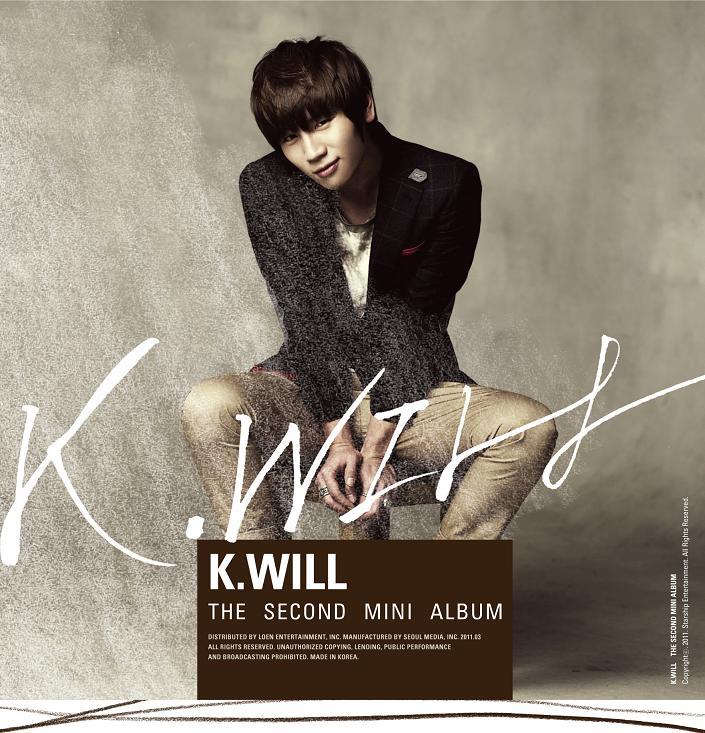 Say what you will about artists who seem to put out new songs every other month, but prolific activity isn’t always a bad thing when it comes to music. K.Will serves as a good example: in four years, he’s gone from an untested rookie to a guaranteed-hit artist by virtue of releasing a succession of songs. Granted, there were a few flops and musical head-scratchers thrown in here and there, but on the whole, the quality of K.Will’s musicianship has improved consistently with each single and collaboration released.

가슴이 뛴다 (Heart Beats) is K. Will’s first non-single outing in two years since sophomore studio album 그립고 그립고 그립다 (Miss, Miss, and Miss You) back in 2009. The new album is a compilation of the improvements that K.Will has accumulated throughout his years as an artist, as it should be. For one, he (or the label) seems to have learned how to put together a good cover — this guy’s had some dreadful album covers in the past. But more seriously, there’s a very clear sense of experimentation within the pop-ballad genre in this EP’s better tracks. It’s not like he suddenly went on a binge of avant-garde in putting together Heart Beats, and it’s not like the experimentation is groundbreaking. But it’s noticeable, and that’s a great improvement over the sometimes-stale K.Will of old.

In the introductory track 분다 (Blows), it’s the artist’s sweeping-yet-controlled performance; in 입이 떨어지지 않아서 (Couldn’t Part My Lips), it’s the uniquely rhythmical chorus and in-the-moment lyrics. But the experimentation shows up best in 기가 차 (Dumbfounded), performed with Hyorin of Sistar and Simon Dominic of Supreme Team. It’s the only truly distinct-sounding track in the whole EP, with acid forming its base beat (no pun intended) and more traditional pop elements completing the hybrid. Simon D contributes two punchy sets of bars, and Hyorin’s falsetto-laden performance harmonizes well with K.Will’s ad-lib-prone vocals. There’s no addictive hook here, which is a bit of risk-taking in today’s Kpop scene. But it pays off, because Dumbfounded‘s unpredictable progression and exotic soundscape make the track stand out much more effectively than such a hook would have.

It’s disappointing, then, that the EP’s title track doesn’t display the same type of creative inspiration. 가슴이 뛴다 (Heart Beats) isn’t a bad song, but we’ve heard it one too many times. The medium-tempo number features a prominent string line and an uplifting melody, but it’s very predictable, and doesn’t have as much life to it as it needs. Kim Tae-Woo took almost this exact same formula in 2010 and produced the terrific 사랑비 (Love Rain);  K.Will’s rendition, on the other hand, somehow lacks the vigor and dynamic energy that made Love Rain an instant classic — it feels like a lazy piece of work instead. It works well enough as a bright love song and will chart very nicely, but it’s not K.Will’s best.

All the more shame, because aside from the lack of a strong, album-identifying track, Heart Beats is still a very quality EP. K.Will was always a very gifted R&B vocalist, and years of experience have only added to his control and explosiveness. Emotions are identified well and sung well. Instrumentation and sound engineering are fitting, and sometimes show unexpected innovation. There are signs that K.Will really thought hard about pushing the boundaries of his music, and the payoffs are there. Unfortunately, Heart Beats is an incomplete course meal. The appetizer is excellent, the dessert ready, and the service flawless. You’re hyped up for the main dish… but it never shows up.