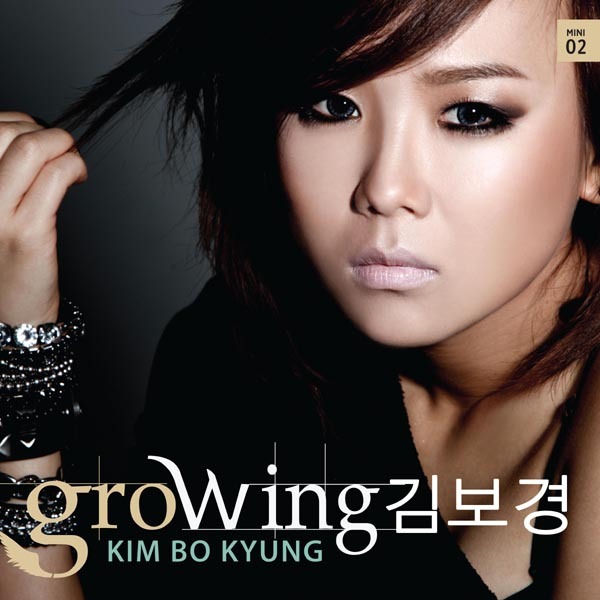 Everyone loves a feel-good success story, and Kim Bo-kyung has a great one. Kim’s father left the family when she was in high school, leaving her to take care of her mother and two sisters; in 2010, to support her family, Kim tried out for Superstar K2, the second season of Korea’s leading singing-competition show. Her story and voice, encapsulated by a now-famous performance of Kelly Clarkson‘s Because Of You, touched many viewers, and even though she didn’t win the season, Sony Music signed her in December 2010 and allowed her to make the quickest debut of any Superstar K2 contestant with The First Day, released in January 2011. Its lead single 하루하루 (Every Day) peaked at #1 on several online charts, netting Kim even more popularity and firmly establishing her name as a rookie artist, and she was even recently contacted by Kelly Clarkson herself. Like I said, this is a great story.

Kim Bo-kyung is back with her second EP, GroWing (yeah, that W is capitalized). If her first outing was focused on selling the diversity of Kim’s prowess and skill, this one plays closer to a couple particular skills. The tracks here are of the pop-rock variety, ranging in intensity from soft alternative to pop punk, with a ballad track thrown in for good measure. There’s a relative void in the mainstream Korean scene right now for good vocalists practicing the genre, so this is good news. I think listeners know by now that this genre is Kim Bo-kyung’s definite forte; K2 showed us that, and The First Day only confirmed it.

GroWing‘s one-two punch of dual-lead-singles is as potent as any in recent memory. Opening track Without U gets things going with energetic riffs before fully launching into speedy, lighthearted pop-punk. A lot of artists attempt this genre and release something half-baked; it’s the style that many idol girl groups, especially, have fallen back on as a source of filler material. Some, like Park Jung-ah and Cho Min-ah, have given more serious attempts before, but I haven’t heard a Korean artist do this genre as well as, say, Park Ki-young does (well, did) alternative and Younha does piano rock. Without U changes that perception. The sound is dense and the refrain explosive: the former is filled with rousing guitar and tight drumwork, while the latter leans on Kim’s soaring vocals. In addition to the good technical performance (she sounds much more at ease with these high notes than those in Every Day, and doesn’t over-emote), she has an attitude in this track, and that’s always what makes these successful. The colorful lyrics (“I really was excited // when you called and told me to come out // I rushed to the meeting, and how ridiculous // You said you were introducing me to a friend // I don’t need it, I don’t care // I’m only interested in you”) and hints of personality in Kim’s performance (that word “ridiculous” is sung with some exasperation) define the song. However, I can’t help but think that this track was played a little too straight; if Kim had let herself go a bit more, allow even more personality in terms of feistiness, frustration, or anything else, I think Without U could have been more memorable. For what it is, though, I’m just glad to hear a track that even pulls off the genre conventions this well.

The album’s real star is the second track, 아파 (It Hurts). Like Without U, this one is also influenced by American-style pop rock from the last decade, this time taking from the rock ballad template. What does that even mean? Well, it’s significantly heavier than traditional Korean rock-ballads – the guitar that kicks in at the chorus and during the bridge is hefty and layered, shifting between deep chords and rhythmic riffs. (Think old-school Maya ballads and you’re about there.) Kim Bo-kyung hits a stride upon this backdrop. I think part of why Every Day was so successful was that Kim’s performance blended senses of gut-wrenching agony and exhilarating freedom so well together, and It Hurts is Exhibit No. 2 in this regard. Kim’s vocals are explosive, but that power also has this tinge of pain endured by a resilient strength. The notes soar (it’s again worth nothing that she handles these much better than in Every Day – this song doesn’t go as high, but she sheds the excessive emotion significantly) as Kim breaks out, and she finds a certain groove in that chorus – the accent control is clearly audible, as she ebbs and flows through it. This last quality is partly due to good melodywriting from the composer team, which includes Kim Tae-sung as well as Eddie Galan and several other American producers (that’s the benefits of being a Sony Music artist for you), but the artist undoubtedly brings her unique pain-resilience interpretation into it. It all makes for a relatively fresh rock ballad track, and a very satisfying one.

The EP’s remaining three tracks round out nicely, although they don’t match the first two. Calm acoustics and a wistful melody color 15번 (Number 15) perhaps the closest to a traditional ballad as Kim’s ever gotten, while unkempt pop-punk number 보고 싶어 (Miss You) find ways to tame Kim’s husky tone to fit the upbeat tune. And 날개 (Wings) is as endearing as it is meant to be inspirational: the sound itself is familiar, using the ever-popular, sweeping modern-rock instrumentation, but here it provides a layer of comfort as the singer aspires, “I’ll fly again // Spreading my wings // Embracing hope // I’ll fly away”. Somewhat disappointingly, these lines are written by veteran lyricist Lee Ji-eun (no relation to IU) and not by Kim Bo-kyung herself, but in context of her life story, they are touching nonetheless.

An interesting point of note – perhaps this is an inevitable comparison, but when you consider this album as a whole, it’s reminiscent of works by Kim Bo-kyung’s idol, Kelly Clarkson. For a rough comparison, GroWing evokes one particular album by Clarkson, Breakaway: Without U can be stylistically linked to Since U Been Gone and It Hurts somewhat to Addicted, and Wings thematically evokes the track Breakaway. The composition of the EP’s atmospheres and Kim’s performances are also similar to Breakaway‘s and Clarkson’s. I don’t think this is a bad thing for GroWing, as none of these tracks are plagiarisms (they don’t sound similar enough to even raise suspicions). If anything, it shows effort on Kim’s part to learn from her accomplished idol’s example, and as long as this doesn’t become a mannerism, she’s only going to benefit from it. I do wish she also followed Clarkson’s example in writing a couple of this EP’s tracks herself – and she definitely has the skill, because she did self-compose a pretty good song, 널 생각하며 (Thinking Of You), from the previous EP – but it’s a minor footnote. It seems clear that Kim will grow into that singer-songwriter role more in the future, and that GroWing was aimed more at artistic polish than experimentation.

The cool thing about this EP, though, is that it still gives us relatively fresh sounds without really “experimenting”. Earlier, I mentioned a “void” for good vocalists practicing pop rock, and Kim Bo-kyung fills that rather convincingly. The sample size is limited, but it seems safe to say that Kim and GroWing rocks harder, exclaims louder, and cries more deeply than many more experienced female solos and their works. This artist will be most interesting to keep an eye on. That great story? It’s still being written.

Hellokpop, as an independent Korean entertainment news website (without influence from any agency or corporation), we need your support! If you have enjoyed our work, consider to support us with a one-time or recurring donation from as low as US$5 to keep our site going! Donate securely below via Stripe, Paypal, Apple Pay or Google Wallet.
FacebookTwitter
SubscribeGoogleWhatsappPinterestDiggRedditStumbleuponVkWeiboPocketTumblrMailMeneameOdnoklassniki
Related ItemsGrowingKim Bo-gyungLee Ji-eunReviewSony Music김보경이지은
← Previous Story Album Review: Lucia with Epitone Project – A Room of One’s Own
Next Story → Album Review: Brown Eyed Girls – Sixth Sense