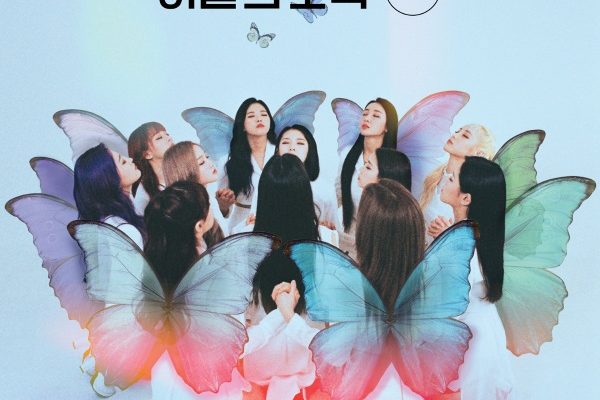 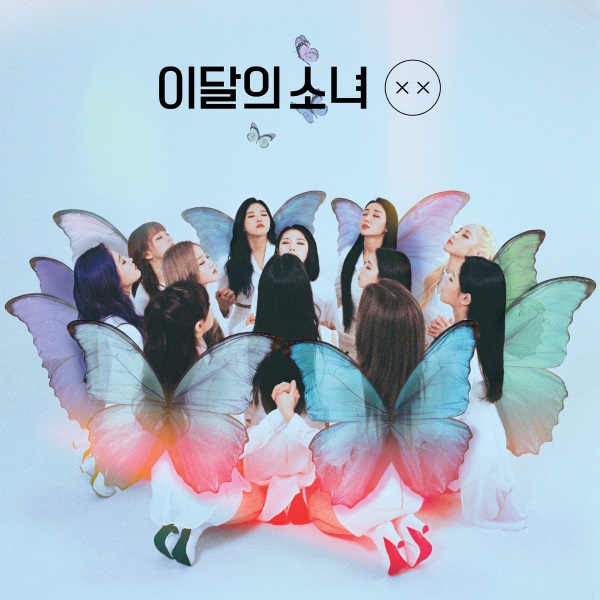 Several tracks in [X X] take place away from the ground. The narrators of those vignettes seek out the air above, tend skyward, chart space. This fixation with flight stands in for various yearnings, ranging from self-actualization to freedom to intimacy. It’s also useful for thinking about how [X X] is put together, and returns in a familiar face by album’s end.

Loona’s first repackage album as a full group is really an entirely new EP on its own, adding five new songs and a new intro to double the volume of debut EP [+ +] (2018). In an odd twist, the new tracks aren’t inserted between the existing ones, but rather piled onto the front of the album while the six tracks from [+ +] follow after in reverse order. This makes for a kind of symmetry across [X X]‘s two halves, bookended by a pair of instrumentals (the new one is pleasantly soulful) and the two title tracks.

The new title single, “Butterfly”, is unabashedly experimental. Opening with a calmly flowing verse on piano chords, the track soon introduces a glean of synths and accelerating drums before a clean drop that clears out the vocals entirely save for a pitched-up hook. The chorus progresses steadily, the bass taking a leisurely rhythm as a cocktail of vocal synths and thin pulses march on. While the idea is nothing new, I’m hard-pressed to recall the last idol pop that emptied out its first chorus to this extent.

The drop itself is fantastic: bold and handsome. Its airiness also leaves some room for the lyrics up to that point to breathe. “Butterfly” sings of a desire to take to the skies, but together with someone; taken away, to be more precise. Producers G-High and Jaden Jeong are coy on the wording to keep love-song connotations to a veiled trickle, though both pieces seem important. The flight is completion: it “feels like I’m being born again”, and “I become more and more perfect”. The companionship is the key to it: the “wings that will take me away”, someone that “I better be around”.

G-High ([X X] is largely produced by the MonoTree team again) fends off potential slack by changing up the chorus in each of its three repetitions. ViVi, Yves, and YeoJin enter the second chorus to extend the “fly like a butterfly” hook (sonically and meaning-wise), and the third rep combines the prechorus melody and the chorus drop together. Because the beat is so steady, the last 100 seconds of the track feel like one long session, punctuated only by a bridge. It’s a heady trance that just keeps going and leaves a lasting aftertaste.

The narrator of “Butterfly” calls her desire a dream, and the album’s first half is set against fittingly hazy backdrops. The lyrics are also intentionally unfocused, painting metaphorical pictures and describing abstraction – going back to what characterized much of Loona’s predebut solo projects. It’s a collection of dreamy moments in mellow moods and minor keys.

I love the fantastical imagery of “Curiosity”, suspended in the air in a private moment (“Inside a twisted spacetime, the blue horizon sprawling beneath our feet”; “Look at us together, under the sky that seems to burn up”). It’s set to sharply swooping and flattening synths and the vocalists ride that chorus with attitude. Both tempo-shifting “Colors” and melancholy pop-ballad “Where You At” are polished and pleasant as well, though these are more melodically hemmed-in. The emphasis on low-key and chilled production bites tracks unless they’re very sharp in another way, I think.

The jarring standout among the sidetracks is “Satellite”. It’s got a memorable chorus melody with this stuttered enunciation. It’s got a bouncy, chippy arrangement that’s reminiscent of WJSN’s work. It’s also by far the most vocally active track as the members jump all over this melody. In one incredible sequence, GoWon and Olivia Hye flaunt playful interjections into a post-chorus as YeoJin and ViVi kick up the tempo, JinSoul stops the arrangement with crisp rapping joined by HyunJin (!), Kim Lip cuts in with a ridiculous slide before passing off the rap to Choerry, and HeeJin returns to the normal melody for Yves and Chuu to segue back into the chorus. (It’s a travesty that they couldn’t work HaSeul into this part.)

Other than maybe massively layered harmonies, I still think this might be the best way to use Loona’s numbers. Not necessarily this hyper, but as seen in “Stylish” and even in “Butterfly”, allowing for vocal flexibility and songs where frequent exchanges aren’t jarring helps these members’ tonal differences (and musical personalities) to shine. The relative flattening of the members’ proven diversity is a difficult problem that the group will have to deal with, through this or another way.

So “Satellite” is tons of fun, and its cute celestial metaphor – comparing a relationship to a planet and its satellite defying gravity to be together – is a celebration of several of Loona’s past motifs. (At this point the group legitimately has a couple albums’ worth of space-themed songs.) It also provides a kind of pure release that’s different from what these aforementioned tracks have.

And really, there’s some pent-up angst by the time the new tracks end. In the haze, we’ve gone through the yearning to get away, fantastical trips under burning skies, and cryptically passionate thoughts on inevitable love (“Colors”), among other things. At this point, the album shifts – to [+ +] and its clarity.

“Stylish” wakes us up (almost too rudely) with its sharp stutter synths. Its confident declarations of love are still assertive, but enacted over a crisp, upbeat tune. “Heat” once again expresses a desire to go higher into the night sky, here in search of shared intimacy: “Let’s fly higher, trust me // I’ll fill you more, above the skies // I want to float up higher, above”. The intensity of sound ratchets up almost sequentially through these five tracks, and soon enough, we’re back where it all started.

In this framing, “Hi High” is a fulfillment of [X X]‘s dream, the catharsis to its emotional build-up. In particular it’s the brighter mirror of “Butterfly”, less brooding, more lively, the longing for flight clearly motivated: “Say hi hi hi hi // That I might say hello // Take me high high high high // Take me a little further”. The song’s happy-go-lucky demeanor and soaring outro, paired with the tinge of nostalgia in the bridge, put an oddly fitting capper on the whole joint. As we’ve written before, “Hi High” is far from perfect; this is where it would have been great if the song had leaned into the emotional depths it only hints at (and fixed up the lyrics). But it works, in this strange but effective repurposing.

[X X] has an interesting vision that invites inspection, and as a repackage it adds quality tracks that expand the original album’s palette while also adding context to it. Its coherence comes short at times, and the production masks some of Loona’s individuality, but this is a polished and confident package. To get here, Loona had to shoot for the moon; in that way, these songs’ heavenward focus is their story too.