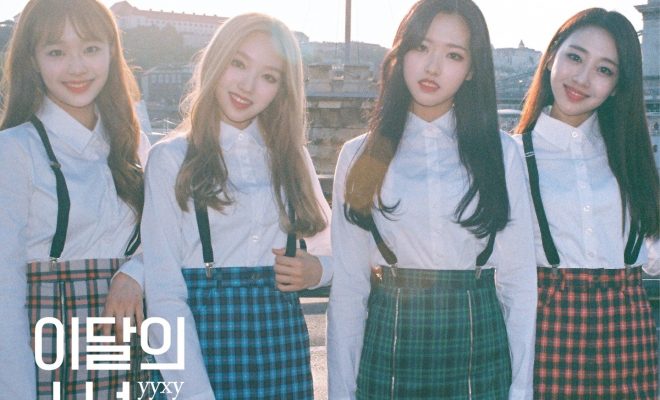 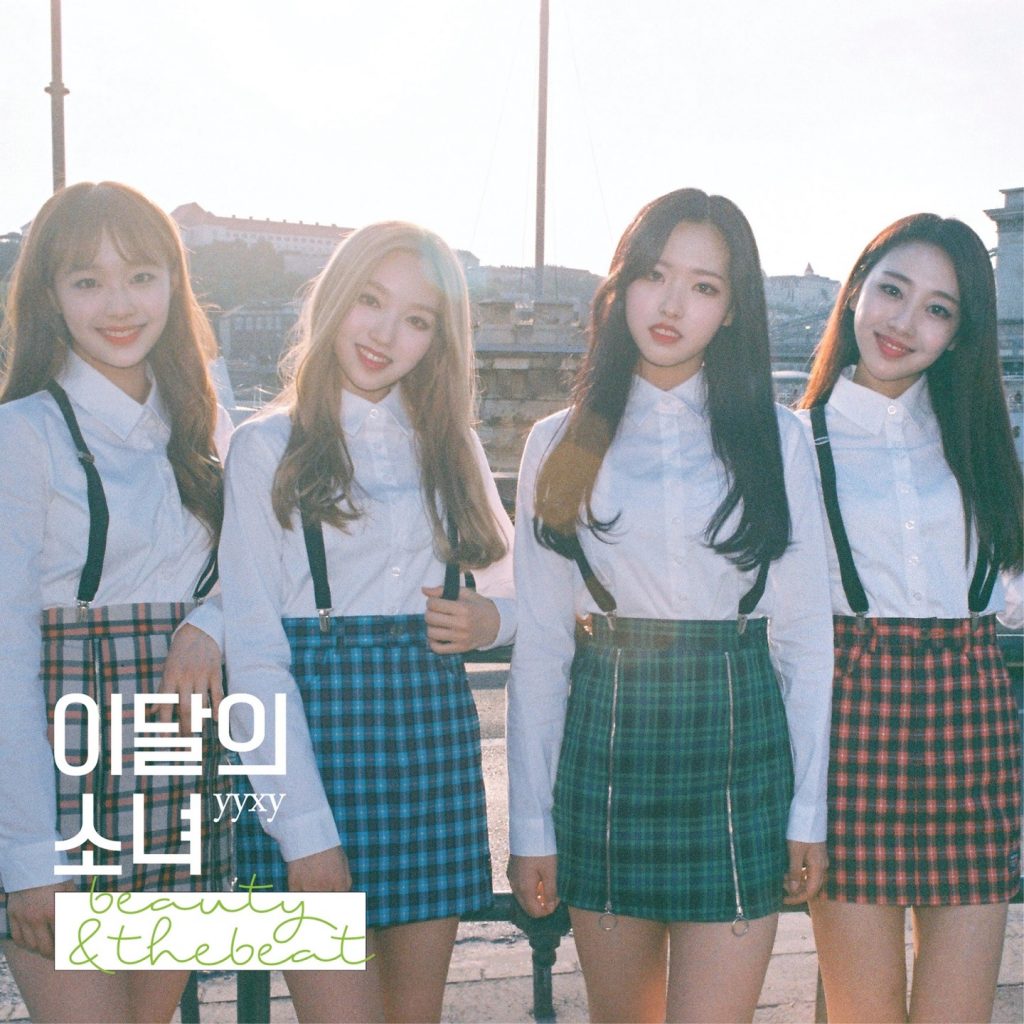 In my mind, Loona has been K-pop’s most interesting project for the past year and a half. A quick rundown for the uninitiated: the idea is a girl group consisting of twelve members, revealed one by one with a solo single and B-side, complete with music video and physical media (hence the group’s Korean name, “Girl of the Month”) and punctuated by sub-unit promotions including an EP and repackage. This lengthy pre-debut process – the first member, HeeJin, debuted in October 2016 – has been characterized by lavish production values, unflinching sound quality, intentional effort on narrative and lore, and aggressive courting of international fans. The group revealed its final member in March, and Loona yyxy (short for “youth youth by young”) is its third and final sub-unit consisting of the last four revealed members.

BlockBerry Creative has been remarkably consistent in maintaining a certain level of musical quality for Loona’s project albums. Each member has proven strong fundamentals and versatility through their solo debuts, and the label has been maverick in curating their discography, spanning experimental dream-pop and tango fare as well as more standard idol group sounds. That strategy has resulted in some exceptional results including several of our favorite electronic tracks of 2017 and one of that year’s best idol-pop albums in Max & Match.

On to the album: I don’t think Loona has ever released a bad song (an achievement given that they have over 50 tracks under their belt already), and that continues to be the case in yyxy’s Beauty & the Beat [stylized “beauty&thebeat”]. Like last year’s Love & Live, it’s a bit of a safe play, a collection of good-to-decent songs that are easy on the ears but don’t leave lasting impression. In fact, it’s probably the safest thing the group’s put out since then except for “The Carol 2.0”. Yet this one has some brilliant highs, and the interplay of yyxy’s vocals is the best we’ve yet seen from Loona.

Lead single “Love4eva” is immediately striking, for two reasons: the bubbling synths that form the intro are attention-grabbers, yes, but it’s also because the denser texture that presses down at the start of each measure is so reminiscent of Girls’ Generation’s “Gee”, one of the iconic openings in K-pop. What’s interesting to me is that while E-Tribe – the writers of “Gee” – actually helped compose this song, the arrangement and thus presumably that intro was not done by them. At any rate, as Grimes voices a most saccharine narration and the drums pick up, the intro is devastatingly effective at signalling exactly the kind of song this is going to be.

The chorus kicks in first (the song’s a little throwback that way), and it’s an upbeat and quick-firing tune set upon pounding drums. The melody is driven by Chuu, perhaps the group’s most versatile vocalist, and supported by copious harmony. From there the track drives almost unceasingly, slowing its rhythm only in the ambient pre-chorus and a bridge that extends that same theme. The track isn’t overwhelming despite this nonstop barrage, and I think this can be credited to the uptempo parts being a bit stretched apart (“Love4eva” clocks in at 3:40, somewhat longer than most songs of this type) and those pre-choruses periodically emptying out the sound to cleanse the palette.

It’s quickly addictive, and the performances are pitch-perfect (Go Won in particular plays a key role here and elsewhere: more on this a bit later). That said, the track has clear limitations. The arrangement sounds dated, and apart from the active bass and pulsing pads in the pre-chorus, feel a bit weightless on the whole. The much-publicized Grimes intro and the dance break (which oddly comes in one of several different versions on the physical album) is basically grafted on.** It would have been nice to see a continuation of the bold, aggressive sounds that have characterized the solo works of this unit (exhibits 1, 2, 3 and 4), but I surmise that that’s being saved for the repackage.

The lyrics, while perfectly serviceable as an excited teenage confession, are ultimately hazy and pedestrian in expression. (Though the little line on aching kidneys is tacky enough to be cute.) This is a bit of a disappointment coming off of Olivia Hye’s “Egoist” in March, which told a focused story of self-love with some clever touches. Perhaps there are lore tie-ins here – group director Jaden Jeong is still involved in writing, and the music video weaves strands of each member’s solo video before its chilling cliffhanger-of-sorts – but the song’s lines don’t shine on their own merit.

The album’s other dance track, “Frozen”, operates under a retro vibe, but Hwang Hyeon’s production is actually pretty sleek. The understated wobble bass and simmering guitar-and-piano chords power a calm buildup, and the chorus blows the doors open with thunderous drums and sparkling, high-pitched synths that hearken to the 90s. It maybe lacks the lead-single impact of “Love4eva”, but in every other respect seems to be the EP’s best track. At heart, the song is elevated by a sonorous and satisfying melody that has multiple gears, and Hwang pens lyrics that have theatrical flair and mesh tightly with the sound.

The best example is in the chorus. The first half provides a punch: the vocalists harmonize on a sweeping melody, as those high synths and guitar break into the fold. At the same time, the song’s central metaphor bleeds into nature: “Frozen, frozen // Thaw me before it’s too late // Shine your light // And bloom a flower upon frozen lands”. Moments later, as the beat enters a breakdown, the toms start pounding and the sharpness of the synths get exaggerated, as in an intensifying storm. This second half leans into the yearning in those earlier words, singing “hold me, hold me, oh now, right now // Thaw me, thaw me, make me warmer” with closer intensity. It’s a persuasive presentation, and the whole package nails the feel of a sentimental wintry anthem, while managing intrepid verve.

They also do something a bit out of the ordinary in “Frozen”: using a voiceover to complete a bridge. Following the second chorus, the instrumentation drops out and the song seems to set up a standard breather. But after a few measures, Chuu sends a note soaring as the chorus arrangement returns (sans the electric guitar), and Go Won starts narrating a message. It turns out to be an inspired assignment given Go Won’s uniquely soft speaking voice, and she barely needs a filter (just a slight echo) to add a fairy-tale dimension to the song.

And there are more examples where yyxy members are positioned to maximize their vocal effectiveness. I wasn’t sure how Go Won’s distinctive tone would mesh in a group; in Beauty & the Beat she performs as an effective spot vocalist, handling finishes and interjecting embellishments throughout the album. Yves, who has a sharper tone and may well be a main vocal in the full group, shines in the calm and subdued moments but also flourishes in “Love4eva”‘s airy pre-chorus (which she’s also done in her solo B-side “D-1”). Olivia Hye sees her lines expand in the side tracks and brings a charming litheness; Chuu, with the most power among the group, takes over as the do-everything vocalist and shows off richness through the wide pitch range she is asked to cover.

We know this kind of thoughtful role management pays dividends; it results in much better experiences than just assigning prominent lines to the most technically gifted person or shoehorning vocalists into parts. (Adaptive teams like F(x) and 2NE1 have set the gold standard for this in the past.) Beauty & the Beat has this to a greater degree than previous unit albums, and replicating its success in this regard is going to be crucial for handling 12 pretty distinctive vocalists in the greater Loona lineup.

In this way and others, as safe as Beauty & the Beat is, it still serves as a valuable step for the group and a peek at its future for listeners. “Rendezvous 18.6y”, a fan tribute, takes yyxy to a funk-pop-lite space that we haven’t seen the group in before (and continues the streak of every Loona release including moon references). Even “One Way”, a relatively nondescript ballad with some nice performances, is supposed to be a first look of sorts at Loona the Ballad, a concept album planned for mid-2019.

The next few weeks should bring a repackage of this album which, if track record is kept, will have an experimental bent with moodier atmosphere and improve upon this current version. And then it’s anyone’s guess. We know the group is releasing something and have seen immense potential, but whether these two years’ iteration will bear creative fruit remains to be seen. In the meantime, while Beauty & the Beat might not be an essential album, it leads me to maintain my assessment: Loona is the most interesting project in K-pop today.

** In fairness it’s possible that the Grimes collaboration is not a one-time thing, and the artist herself hinted that a production might occur down the road; it’s an intriguing prospect.