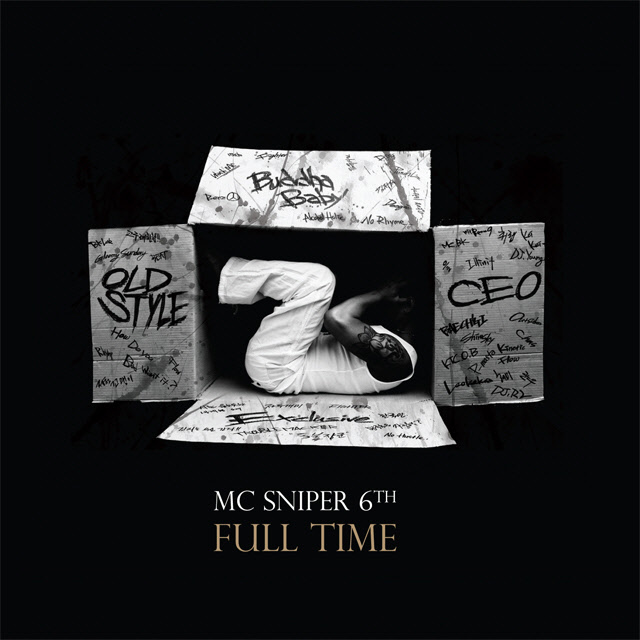 In many ways, MC Sniper defies classification. By all technical standards, he’s not a good rapper; his rhymes are rudimentary or nonexistent, his prose mundane and unimaginative, his delivery often muddled and jarring, and his flow choppy. What’s more, none of those things even show a hint of improvement in Full Time, his sixth studio album in 10 years and his first in three. But despite all that, his lyrics and songs are often more moving and relatable to than better writers’. He chooses to write about social issues, personal tragedies, and the plight of everyday people, and write in a way that still resonates deeply with us. Full Time is full of this empathy, which is why it’s difficult to label it “bad” based on the lack of technical fluency alone.

This album plays a lot like an omnibus film – a bunch of stories, from both the artist’s personal experience and from others’, tied together under a big picture. Many of these are vivid accounts of specific events, and they tend to make the most absorbing lyrics on Full Time. 데이빗 (David) tells an incredible story about the rapper’s high-school friends who had an unwanted pregnancy between them and gave the baby up for adoption abroad; seventeen years later, a boy named David sends MC Sniper a fan letter from America, along with a request to help him find his biological parents… and you see where this is going. (Apparently this is half a true story – David actually found his parents directly.)

Letter To Heaven is a heartwarming recounting of the friendship between Sniper and the late rapper Turtleman, who passed away in 2008. Piano was inspired by a high-school student whose mother had ran away from home, leaving him to take care of his ill father. And although the artist hasn’t mentioned it, 불량품 (Defective) is pretty clearly commenting on the mass indecent abuse scandal out of Gwangju Inhwa School that was reignited with the film 도가니 (The Crucible) last year. MC Sniper pens these lyrics with purpose and conviction, painting a society full of suffering and brokenness, and they are doubtlessly the album’s strongest upside.

The general-themed songs are more hit or miss. On the one hand, there are gems like 인생 (Life) and 죽음의 예술 (Art of Death), both emotionally devastating soliloquies; on the other hand, there’s the lead single 할 수 있어 (I Can Do It), which has a strong message and a few great lines diluted by a swarm of clichés. This problem appears to be inherent in Full Time‘s self-reflective tracks; I Can Do It at least carries a different atmosphere, but Sniper’s verses in 거울자아 (Mirror Ego), Drive, Call Me, and a couple other tracks offer little, if any, moments of note.

Sounds-wise, Full Time is mediocre. Again, there are some gems: Job Korea delivers an energetic beat reminiscent of samul nori, and Yiruma lends his pretty sensibility and performance to I Can Do It. (This track is perhaps quintessentially MC Sniper, in that it follows a lot of his previous albums’ concepts – especially Museum – while featuring the crucial contributor to the best track ever released by a Sniper Sound artist.) Both group tracks, Call Me and Better Days, offer appropriately bombastic instrumentals. And Absinthe floats along a sublime electronic ambience, making for perhaps the album’s best track. But most of the rest is fairly pedestrian (not necessarily bad).

I should mention, though, that there are a couple beats here that are among the worst mismatches in recent memory. For example, David has a powerful riff-based beat that would work well with anything but the story that Sniper’s telling. The pervasive tension makes a bit more sense in the refrain, which is a recitation of an ironically appropriate Buddhist mantra, but it detracts from the entire rest of the track. Similarly, Art of Death could have benefited from a less explicitly morbid background melody.

As mentioned earlier, MC Sniper’s rapping doesn’t really improve at all in Full Time. In his stead, featured performers, ranging from jazz vocalist Woongsan to Park Wan-gyu to MC Meta and Sniper Sound rappers, are heavily relied upon. I think it’s about time that we accepted that his strengths lie elsewhere. His verse in Mirror Ego is riddled with atrocious liberties in enunciation and uncomfortably strained flow, his performances elsewhere are often abrasive when not monotonous (with the exception of Job Korea), and his lyricism looks even more lackluster when held against younger rappers in Call Me and Better Days. He addresses this directly in 나는 다시 일어서 (I Rise Again), in a verse which really says it all:

Yeah, so I can’t rap
Can’t ride a beat – every time,
Bare-necessity songs that sound like reciting poetry
Have all kinds of problems, there isn’t even wit
It’s garbage, with nary a rhyme to be found

Still, later on in this song he makes a case for himself. He says that if nothing else, he makes sure that the “themes of the poetry” are solid, and delivers “the language of emotion”. It’s the same case that I made for him in my introduction, and the body of Full Time just adds more evidence to the claim. We have here a flawed album that still manages, at times, to be as powerful as any other. MC Sniper may not always deliver perfectly, but this much is clear: he’s got a lot of things to say. He’s one of the few with a large enough influence and long enough experience to get his messages out there. And so, regardless of what anyone says, this guy’s going to keep saying what he feels needs to be said. There is something to be said for this kind of consistency.