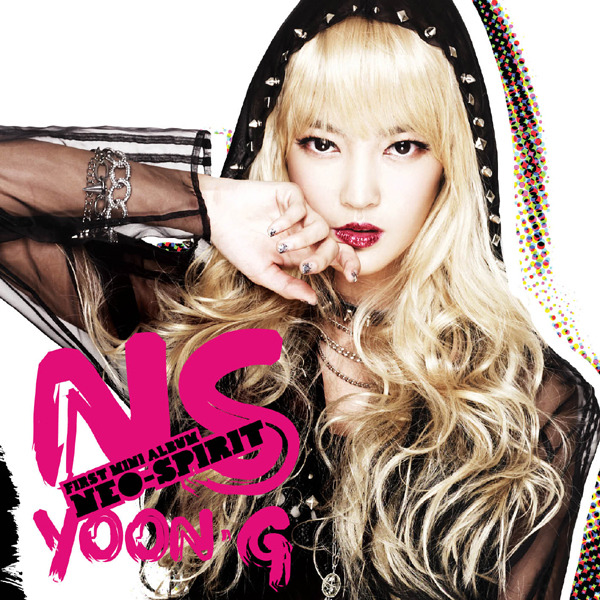 Remember Ivy? It’s a forever ago, but there was a time when she reigned above the female solo artists. Heir apparent to Lee Hyori, she hit a home run with 2007′s A Sweet Moment and seemed certain to have a long, fruitful career until the scandal that cut her prime short. NS Yoon-G‘s career so far is reminiscent of Ivy’s rise to prominence. Both artists had a few months of relative obscurity upon debut. Ivy’s first two single cuts charted only moderately well before A-ha gained more fame, and it wasn’t until two years later that she really took off; on the other hand, NS Yoon-G spent part of 2009 and most of 2010 being little known herself. Both artists are capable of handling dance and ballad pop, with an emphasis on the former; both have a decent supporting cast that writes them trendy, not excellent, songs.

Most saliently for our purposes, Ivy’s career blossomed with a dance track that broke genre conventions in favor of an unorthodox and uncontrolled performance – 유혹의 소나타 (Sonata of Temptation) (2007). NS Yoon-G is poised to do the same thing with her new EP Neo Spirit, which features as its lead single a spiritual successor of sorts to Sonata. 마녀가 된 이유 (Why I Became A Witch) is not a hook song in the trendy mold; The unorthodox structure and shifting moods make that clear. The track feels unkempt, intentionally rough on the edges. At the very least, it shows a willingness to break away from the day’s trend to try something else. The track’s chorus is clearly its highlight; sweeping synths and electric beats power a very attractive melody that sounds better than that of many chorus-centric hook songs.

Unfortunately, the rest of Why I Became A Witch doesn’t live up to it. The structure is complex for the sake of complexity – the poorly executed rap intro doesn’t play well with the animated verse and chorus (and no, it’s not a matter of transition), and the few-too-many mood shifts end up detracting from the chorus by unfocusing the track. That lack of focus is pervasive throughout: the sound embellishments that composer Double Side Kick chose to throw in, ranging from operatic tenor hits to witch cackles, are woefully unnecessary. Most problematically, the lyrics do nothing to help the song. They’re extremely bare-bones, failing to give either narrative or substance. Not only is this a huge missed opportunity, but for a song titled Why I Became A Witch, the lyrics come up way short of justifying the selling point. Even with all the deficiencies, the song still works to a certain extent – the underlying melodies and progression remain strong – but not to its potential.

On the other end of the spectrum, there’s 니가 뭘 알아 (What Do You Know), a pop-ballad designed to give NS Yoon-G some room to do vocal work. She’s a pretty capable vocalist in this genre, handling the song with easy stability and a shade of wistful emotion. The piano-heavy instrumentation as well as the invitation for Verbal Jint, who gives a grounded performance reminiscent of his work in the 015B single 그녀에게 전화오게 하는 방법 (How To Make Her Call) (2007), turn out to be good calls.

The remaining tracks are of little note. Talk Talk Talk, a pre-release single from last year, is probably the most interesting of the bunch, exuding an infectious charm aided by the lively synth beat. Minor-chord techno track Shower and dance-lite number 또 보고 싶어 (Miss You Again) are more or less on the same tack, except with less effective devices.

Neo Spirit is really about as mediocre as a pop album can get – not great, not terrible. There are flashes of inspiration here and there, but none really pan out. There is truly surprisingly little to be said about the EP, other than what’s been discussed. Going back to the Ivy comparison, this is where the two artists’ paths diverge: where the elder artist’s foray into unorthodoxy yielded brilliant results, the younger one’s gives us dubious work at best. Is it unfair to do this direct comparison? Of course it is. But the point remains: NS Yoon-G has talent, but if she’s aiming for the stars, Neo Spirit‘s quality won’t quite cut it.