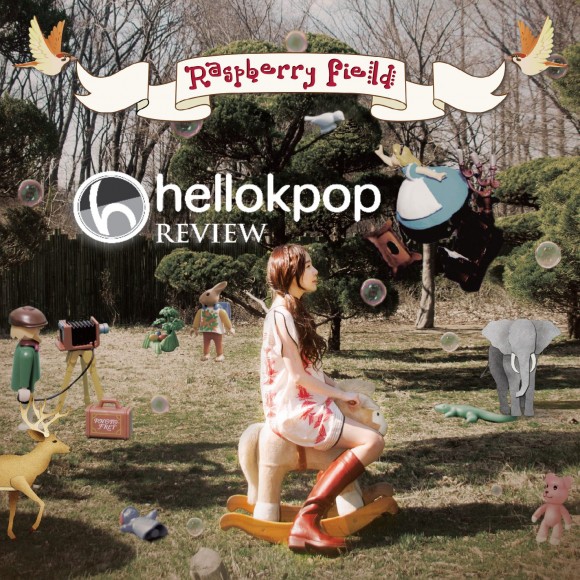 Two of the albums that I’ve been listening to lately are Lalasweet‘s Bittersweet (2011) and BeSweet‘s Bitter Sweet (2012). So when an album titled Sweet & Bitter lands on my lap on top of that, I’m pretty sure that’s acceptable grounds for semantic satiation. (Just read that sentence a few times. It’ll happen.) Raspberry Field‘s first full-length album does make appropriate use of that title, though. The sweet is here, along with the bitter, and yet it’s not quite “bittersweet” – it actually is “sweet and bitter”.

Let’s start with the sweet. Vocalist and now-lone member Soy (she’s a former T.T.Ma member; goodness, does anyone even remember that group?) possesses the type of lithe, soft voice that should be familiar to indie fans nowadays. Her repertoire in Sweet & Bitter is relatively limited, never straying outside the boundaries of easy-listening, but the tracks themselves are consistently polished; the co-production of Cho Kyu-chan (who is also Soy’s brother-in-law) does wonders for that.

Breezy duet Can You is an early example of these strengths. Soy recruits the help of Ellegarden‘s and The Hiatus‘s Hosomi Takeshi in a sugary but balanced ballad that transitions into a passionate modern-rock number atop driving guitars. It’s Soy’s finest self-composed work – the strong melody sustains focus despite the length and allows the sublime lyrics to be paced patiently. The sunny warmth of lead single 처음 만난 자유 (Freedom for the First Time) and the 있잖아, (So Hey,) remake are other moments of the album at its sweetest.

There’s also a fair amount of the bitter. The last third of the album is composed of odes and reminiscences that retain the soft edges of the lighthearted opening but introduce varying degrees of heartbreak and solitude. The remake of She Was Right reprises the original’s broken and reversed apology; Away From You opens up space for the rhythm guitar and ambient backing to diffuse outward as Soy questions the freedom of parting. Beautiful Collision is more subtle, arranged by eAeon in his trademark spliced-and-synthetic instrumentation.

Yet, as I said, the album is not “bittersweet”. In that word, the dominant taste is “sweet” but the focus is on the “bitter”. It’s defined as a happy thing that’s “tinged by sadness”. If the majority of the album was like My J Boy – a recounting of blindingly bright love that is, in the end, revealed to be viewed through the lens of time – bittersweet would be an appropriate adjective for it. But Raspberry Field’s approach is more balanced, often just keeping the two ingredients in separate tracks. I don’t know if this was the artist’s intention, and I won’t say that this is necessarily a better approach than the “bittersweet” approach, but this is why I think the title is appropriate.

The theme is developed nicely and there are a couple memorable tracks; so far, so good. One issue that I should note is that the album is much too reliant on the same device. Can You, Lullaby, She Was Right, Away From You, and to a lesser extent 149 all make use of a dramatic transition before the final chorus (or set of choruses) that increases complexity and volume compared to the rest of the track and usually involves a repeated refrain and atmospheric guitar. It’s an effective and popular technique (Nell could probably make a couple albums out of just these types of songs) but this is too much. The power that such endings radiate need to be digested over time even after the song is over, but Sweet & Bitter stacks several of these back-to-back. It becomes a sustained and tiring climax.

For that reason, Sweet & Bitter is best in chunks. The five high-impact tracks above are more than enjoyable when on their own. All other issues with this album – Soy’s limited vocal performances, repetitive lyrical themes, and so on – become less problematic. Raspberry Field hasn’t produced a particularly great contribution or profundity, but if you like a collection of polished, well-written, and sentimental singles, you could certainly do worse than this one.