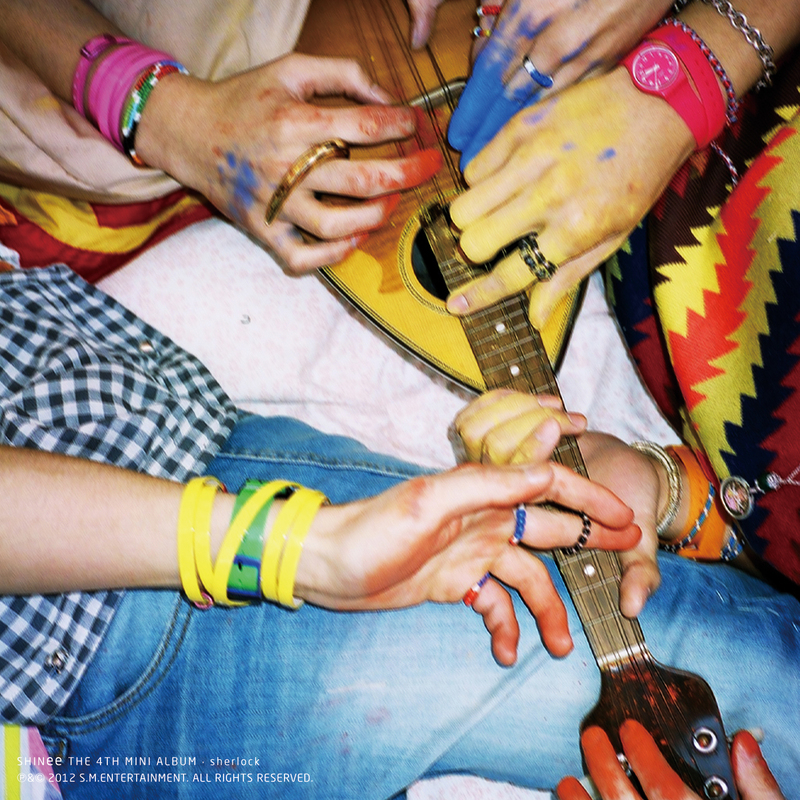 When I heard that the new SHINee EP would adopt some concept of combining two tracks into one, my initial reaction was this. “Um, isn’t that what that company’s been doing for a while?” Because, as we know, one of the recurring characteristics of composer Yoo Young-jin‘s philosophy is the amalgamation of two (or three or four) wildly different themes in a musical potpourri that sometimes works well and sometimes explodes in our face. I wouldn’t have been surprised to find out, for example, that TVXQ‘s Rising Sun (2005) or Tri-Angle (2004) or – heck, let’s go way back – H.O.T.‘s I Yah (1999) were actually several separate tracks combined. But no, apparently SHINee’s Sherlock is the first time that this has been done intentionally. Experimentation is still in style at SM Entertainment.

The premise: two tracks, Clue and Note, each with a distinct theme, are combined into the lead single Sherlock. Simple enough in theory. That said, the two “ingredient” tracks really are quite different: Clue is a heady club tune that creates tension with bombastic brass and bouncy bass, while Note lives and dies by its sweeping melodies and potent chorus. Sure, the two share some similar brass textures and whatnot, and the dichotomy isn’t as bad as with some of the old SMP songs mentioned above, but these are not songs that you’d readily expect to merge.

The composer staff, headlined by longtime SM collaborator Thomas Troelsen, figures out a way to do it. Essentially, clips of Clue become Sherlock‘s verses and bridges, while Note becomes the chorus and refrain. In a departure from Yoo’s style, the transitions are virtually seamless: Note‘s melody slides in very naturally at the chorus, and the abrupt disappearance of the complex bass layer that accompanies that transition ends up sounding like a harmless stylistic flair.

Sherlock is free to become the latest entry in a long line of excellent dance pop tracks to come out of this label in recent years. By nature, the track’s structure lends itself to very effective management of both tension and release; the vibrancy and fidelity of the brass line and other instrumentals give dimension to the handsome melody and the trademark SM-polish to the song. The track is permeated by a shower of vocals from every direction, and while Jonghyun predictably steals the show (his very first verse is probably the most vocally impressive moment of the song), others – notably Taemin – stand their ground with solid performances.

Thematically, the metaphor of the detective is a good idea, but the concept is overshadowed by the execution: lyricist Cho Yun-gyong‘s language is pregnant with intrigue and rich in imagination, creating electric atmosphere and in-the-moment intensity that complements the sound. Her almost fantastical expressions are reminiscent of Kim Yi-na‘s, although Sherlock (as well as Cho’s other work, notably with F(x)) is not as visceral as Kim’s lyrics. It should be said that there’s not a whole lot in the way of narrative here, given the stream-of-consciousness presentation; Clue and Note fill in some of the story, but Sherlock works fine without that.

The rest of the EP is rounded out by four tracks of safer mold. Pop-ballad Alarm Clock is the best of the bunch, featuring a tame yet heavy beat to be punctuated by an arpeggio of flute. The Reason is a pleasant ballad that does little to distinguish itself, while Honesty provides the album’s sole unplugged moment. Stranger stands out for its somewhat retro sound and abrasive beat approach, but quickly turns pedestrian. It’s pretty difficult to follow up Sherlock and the other pieces, but the final three tracks are downright forgettable – even the vocal performances fall a notch. It’s a similar problem to one that SHINee’s Lucifer (2010) had. (Though I’ll grant that that album’s opening troika was even more difficult to follow up than this.)

Even before Sherlock, SHINee was the among the most consistently excellent boy bands in terms of production – the most consistent in my view, with Infinite somewhere close by. SM’s creative innovation has been a large part of that, and Sherlock again raises the bar in this department. Is it a seminal piece of work? No, it isn’t. But it is another example of the kind of excellence that corporate planning can sometimes produce; a reminder that for many groups, such excellence is now recurrent rather than exceptional. SHINee goes even further – they’re making it into a trend.