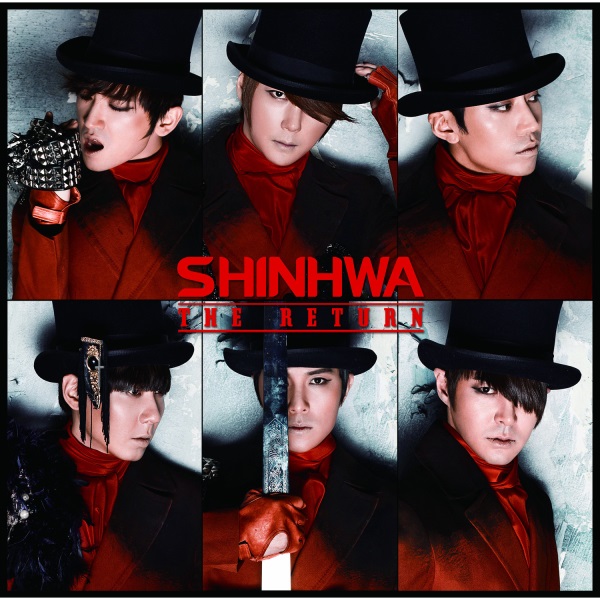 Through fourteen years, Shinhwa has been nothing if not reliable. Their respectable discography and still-immense recognition testify to that. Unfortunately, this group has rarely been more than that. Apart from Perfect Man (2002) and Brand New (2004), that aforementioned discography is sorely lacking in weighty quality, and both studio releases that followed their one truly notable album (Brand New) were disappointing regressions. Admittedly, the members made up for it with individual ventures. Lee Min-woo has a couple outstanding releases to highlight his lengthy solo career, while Shin Hye-sung experimented with ballad for six years before seeming to find his niche in modern rock. Kim Dong-wan and Jun Jin‘s respective works were popular enough to net a couple chart-toppers, Andy has two full-lengths to his name, and Eric has always been prolific in featured appearances.

I get the impression that all that experience is really beginning to pay off for these guys. The Return, Shinhwa’s tenth (!) studio album, cleverly positions itself between trendy and old-school, which makes it feel contemporary while also catering to the older fans. That’s not easy to do, but Shinhwa makes it sound natural. For the most part, this dual positioning takes place across separate tracks. The atmosphere and acoustic rhythm of Move With Me, the bubbly string-infused sound of Be My Love, and the sweeping melody of Breathin’ should feel particularly familiar to 90s listeners. Meanwhile, the synthpop soundset of Welcome and the subtler nuances of Re-Love‘s instrumentation decidedly come from a more recent era. With the back-and-forth placement of these tracks, The Return maintains a nice balance.

Now, I just mentioned three tracks that hearken back to ye olden days. Yet none of these capture what truly made Shinhwa distinct – the charisma exuded in their dance music. If I may make a little digression: the group debuted under SM Entertainment, where they became one of the pioneers of Yoo Young-jin‘s nascent “SMP” philosophy. You know where this is going: the over-the-top aggression, gloominess, and apocalyptic atmosphere associated with that style found themselves into the earliest Shinhwa tracks. However, even after the SMP influences waned (by 2001′s Hey, Come On, the group had outgrown the genre), some of that charismatic style remained and began to define other aspects of Shinhwa’s identity. Perfect Man succeeded not only because it was a good song, but also because it specifically combined a catchy yet powerful (manly, if that word works for you) melody with tough attitude and mannerism and built up that image. (That whole album is an example of this formula, with tracks like Shout and Red Angel.) By now, the charismatic appeal is almost inseparable from them – as illustrated by the smash hit of Brand New (which had the macho aplenty) and the relative failure of Your Man (which did not).

Shinhwa members know that this masculinity is their symbol and style, and decide to stay true to those roots. Enter lead single Venus; true to the album’s direction, it features the old Shinhwa charisma while also adopting modern dance-pop conventions. At first, it doesn’t seem like that first part is true; the ominous club-tune intro, stuttered chorus, autotune, and dubstep are not like anything we’ve heard from them before. It feels sleeker and cleaner, but at the same time it does sound toned down. In short, their instrument (in a general sense) has changed completely.

But give it a few more listens, and the old style will start to surface. The chorus, while split in beat and controlled in melody, still packs a punch with that thumping drum-machine and mass harmony. The timing and incorporation of the rap verses are familiar, and they’re performed almost to the point of predictability. The attitude and mannerisms are all there – the six men are confident in their declaration of love at first sight, and they’re not taking “no” for an answer. It’s a new instrument, but still the same song. Venus probably could have used some more density as well as more explosiveness, but give it credit for preserving tradition while being a more-than-decent modern synth track.

Hurts is in the same vein. The Shinhwa ballad tradition – straightforward melodies and emphasis on collective performance over personal – is still here, just with new sounds. Shin Hye-sung still does the vocal heavy lifting, although it bears noting that Min-woo only gets better every year. Even the reliance on falsetto backing is intact in the hook. The track is serviceable, but the fact that Eric’s rapping is by far the most interesting part (similar to 2006′s Midnight Girl) is testament to the limitations of this approach.

The Return does show flashes of completely new experiments, and these moments give us a peek into Shinhwa’s ambitions as artists. Album opener On The Road is an unexpected Brit-rock track, courtesy of Shin Hye-sung; while he rightfully takes control of the track, the other members join in and do their parts. Min-woo composed Red Carpet, and while it doesn’t approach the brilliance of his solo single Bump!!! (2005) and related works, it is a significant departure from even his more recent releases. The best of this novel bunch is Let It Go, written by former Solid member Jae Chong and Aziatix‘s Eddie Shin; it’s the most effective love song on the album, breaking ballad molds and instead opting for a deceptively uptempo melody powered by electric guitar. It’s premature, but Shinhwa could probably settle on this brand and see how it goes.

Some doubted that Shinhwa could ever return; others feared a g.o.d.-like situation for them. Well, the album is a pretty definitive statement that the longest-running idol group in Korean history is very much alive and well and back. Musically, The Return is still not special, but it is a natural evolution; it’s precisely what I would expect this group to sound like in 2012. It gets me looking forward to where they’re going next. As a long-hiatus-breaking comeback, the album does its job admirably.