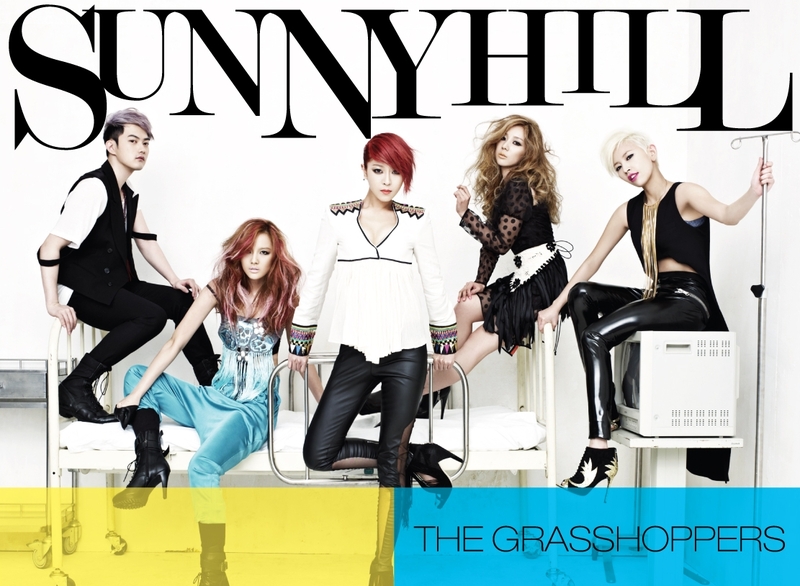 It’s a single! It’s an EP! No, The Grasshoppers is actually something that Loen Entertainment calls a “maxi-single”. One gathers that these things are supposed to lie somewhere between a single and an EP. Which actually isn’t the worst occasion for a new buzzword that I could think of; come on, what do you call a collection that has three tracks on it?

The alb – I mean, the maxi-single, is Sunny Hill‘s first real outing since last year’s fairly well-received tandem of Midnight Circus (which we reviewed here) and 기도 (Prayer). Both were highly theme-reliant releases; a layered allegory of the circus drove the former, and its traces of unstable psychology developed into full-on destructive melancholia in the latter. As intense as they were, the two raised this coed quintet’s stock significantly and, just as importantly, gave it a stamp of uniqueness. How do you follow that up?

Lee Min-soo‘s solution is to delve further into the unorthodox and uncanny. The lead single 베짱이 찬가 (The Grasshopper Song; although better translated as Grasshopper Ode), for starters, is not a light track. Thematically morbid, the song attempts to capture the overwhelming sense of futility in modern life. It’s not nihilistic, no. The speaker simply finds no meaning in the grind. She vehemently shoots down “false hope” and calls happiness an “unattainable mirage”. Instead, the song extolls the virtue of enjoying life, hence the allusive title. The lyrics here aren’t the deepest things ever, but there are a few moments of piercing acumen like the line “All you who dance and play, who have become criminals”.

Aesop’s fable is not the only source that The Grasshopper Song borrows from; as you might know (or recognize), the hook “ring-a ring-a ring” is adapted from the melody of a Korean children’s game. The chorus has gotten quite a makeover, however: it’s not unrecognizable, but the subtly changed notes and context make it sound like something out of an American McGee interpretation of the children’s game.

That melody is then drenched in pervasively disturbing cello lines and relentless beats, before being packed to claustrophobia-inducing levels of spliced synths and acoustics. The instrumentation is meant to be uncomfortable; what with the dizzying speed, (appropriately) schizophrenic performances, and jarring juxtapositions, it’d be a wonder if it didn’t succeed. One reviewer described the song as having “Gothic-rock motifs”, and that’s pretty accurate.

Now, as dark and psychedelic as The Grasshopper Song is, it’s not the contrived madhouse that Midnight Circus was. The sound is distilled, the performances compact, and even the lyrics under control. Kim Yi-na has been writing extremely well recently, but I half expected her lyrics to backfire again in this song. Doesn’t happen. Gone are Midnight Circus‘s bloated verbiage and inexplicable Agatha Christie references; The Grasshopper Song tells its parable without degenerating into indulgence. The lyrics even contribute rhythm to the vocal line, as heard in the closing minute of the track.

Good lyricism is found across the entire maxi-single, actually (I’m never going to get used to typing that.). Sunny Hill members take writing into their own hands once again in 나쁜 남자 (Bad Man), and the result is absolutely delightful. It’s a spiritual successor to the Midnight Circus EP’s Let’s Talk About, a vicious satire of objectification, girl groups, the entertainment industry, and more. Misung and Kota again pen the words (they composed the track too, actually), and while Bad Man isn’t as visibly scathing as Let’s Talk About, it’s cleverer. It playfully pokes at the absurdity of pompous men with subtle sarcasm and well-done attitude. Of course, the real focus isn’t on any of that: despite expected denials by Loen officials, it’s obvious that the track is a smartly veiled satire upon South Korean president, Lee Myung-bak. (Look, you might be able to explain away most of the myriad references, but the “G.G.G.G.” hook in the middle is inescapable.) Combined with the gently bustling house beat and lively brass fanfare, Bad Man makes for a highly entertaining and enjoyable urban track.

Kim Yi-na takes the reins back in 술래잡기 (Hide And Seek), a love track that displays her unique diction and narrative style in their best element. Among recent tracks out of the Loen-Nega Network collective, the track carries similar atmosphere to Brown Eyed Girls’ Lovemotion, with its dispassionate atmosphere and attractive rhythm; Hide And Seek is not as fixated on chic, though, and breaks into melody now and then. The line “멀어진다 한 발짝씩 // 다가온다 한 발짝씩” (“Walks away, one step at a time // Approaches, one step at a time”) is inexplicably sung with odd pronunciation, probably to strengthen the whole detached/chic feel, but that’s the only blemish in an otherwise faultless vocal performance throughout the entire release. (Worth noting, by the way, that male member Jang Hyun is heard in all three tracks of The Grasshoppers – small parts, but an improvement from the total vocal absence in Midnight Circus).

As you can see, The Grasshoppers is another heavily concept-based release from Sunny Hill. Their work so far is more niche-oriented than their almost-sister-group Brown Eyed Girls, and The Grasshopper Song is their most niche single to date. It seems clear that as long as Lee Min-soo is writing for them, Sunny Hill will have opportunities to take on projects like this one and excel at them – they have a very broad range of competency. So I’m wondering: will we ever see the old, 2007-style Sunny Hill again? Or are they settling into this niche-player role permanently? It’s an interesting thing to watch for. Either way, they will be contributing something unique to the scene.