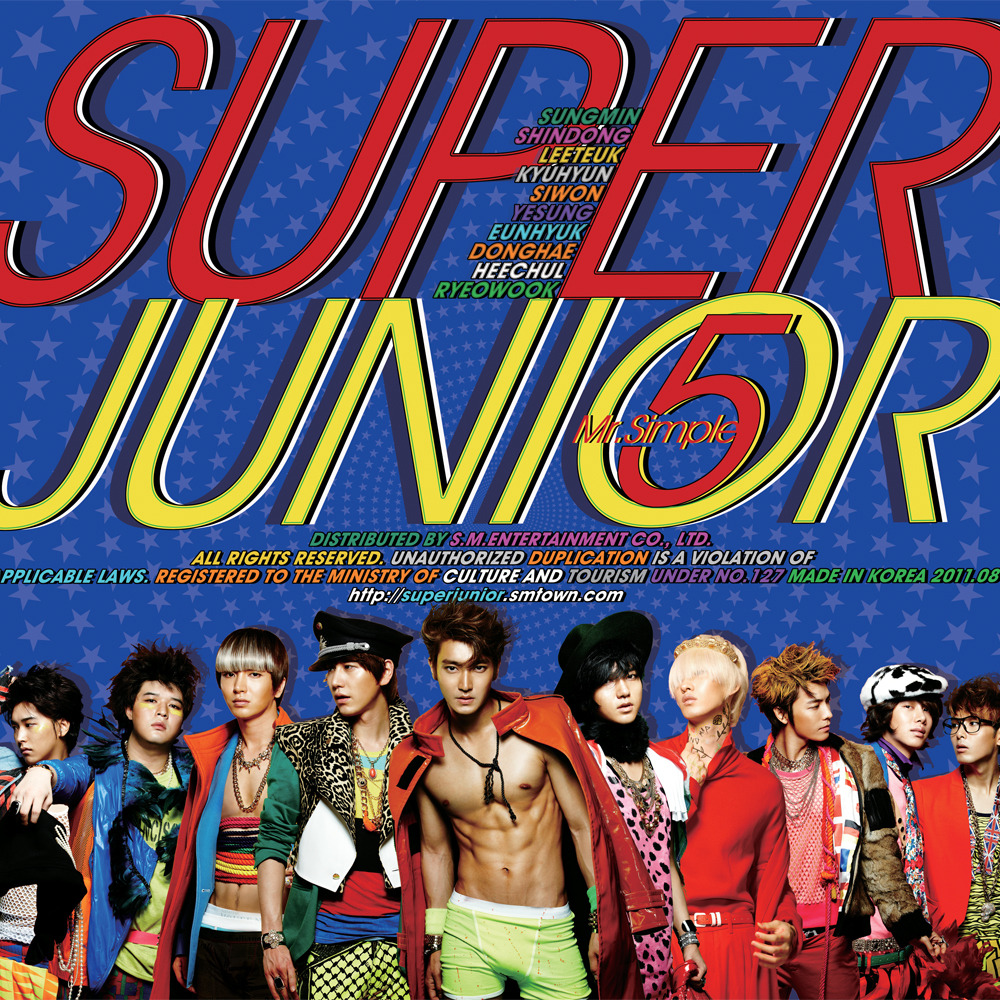 [Note: Following SM Entertainment tradition, this album’s Korean-titled songs all have an “official” English title attached to them, many of which have nothing to do with their Korean counterparts. Still, to avoid confusion and to respect the original decision, I’ll refer to these songs with the SM-labeled titles.]

Few genres have been as immediately recognizable as SM Entertainment‘s flagship genre from the last decade, “SMP” (“SM Performance”). Screaming vocals, distorted synthesizer, usually self-indulgent and almost always incomprehensible lyrics. But it made some good tracks in its day, too, and that includes Super Junior tracks. “SJ Funky”, its seeming successor and SM composer Yoo Young-Jin‘s big buzzword, is harder to define and even harder to appreciate. Sorry, Sorry, Bonamana, and now Mr. Simple; I understand that it’s cool to give a group its own genre, but this is becoming a stretch.

One thing you can do with a hard-to-define genre is to just keep making the songs similar to each other. It looks like that’s what Mr. Yoo has done with Super Junior’s lead singles ever since Sorry, Sorry.  As many have pointed out since its release, the new album’s title single Mr. Simple is decidedly reminiscent of that wildly successful “SJ Funky” forerunner. The track employs a rather lengthy chorus, returning to Sorry, Sorry‘s infinite-repeat, rhythm-and-beat-centric approach to chorus over Bonamana‘s flirtation with melody. The abrasive, ice-cold synthesizer is still there, pitched way, way higher this time around. Interestingly,the track’s structure takes a page out of the ol’ SMP rulebook: the last minute and a half of the track is downright schizophrenic in its fast-paced mashup of several distinctive melodies and hooks, just like TVXQ‘s Tri-Angle, Rising Sun, and countless other hits used to be.

It’s unfortunate that Mr. Simple fails to achieve the level of energy, if nothing else, that those SMP tracks had to their name. This one is caught up between the primal and the chic, and even the chic doesn’t work as well as it did in Sorry, Sorry. That song wasn’t a classic by any means, but at least it had a semblance of cohesiveness and class. Mr. Simple just has way too much going on for its own good. The lyrics don’t help, either; they have a good message, encouraging hope and momentary abandon, but they’re a total mismatch with this beat.  The vocal performances, while sounding nice, are completely tailored to the rhythm, and contribute to the burial of this message. The resulting Mr. Simple comes out as a “Mr. Jumble”.

Most of the rest of the album is pretty cleanly divided into the club/dance and pop ballad categories. On the whole, the former group of tracks is much more interesting than the latter. 오페라 (Opera) is a standout, paced by an intoxicating stutter beat and a sublime sense of kinetic energy throughout. Walkin’ has some nice performances (Kyuhyun‘s is particularly memorable), and 결투 (Feels Good), while a little underwhelming compared to its title (it means “duel” in Korean), is a perfectly serviceable club tune with an engaging hook.

The pop-ballad end does have 어느새 우린 (Good Friends) to boast of: composed by ballad great, composer, and TV personality Yoon Jong-Shin, this track has a distinct accordion/brass soundset and takes advantage of it with a warm, playful melody. The vocalists get some well-deserved leeway to improvise (I think Super Junior’s lead vocals are much better than they sometimes get credit for), with great results; the jazzy embellishments and overall 90s sensibilities give the track a lot of personality. It might even be the pick of the album. Other than Good Friends, though, Mr. Simple is sorely lacking in a good slowdown option. Led by기억을 따라 (Memories), a textbook soundtrack-type medium tempo ballad (no surprise; it’s composed by Park Jun-Su, a notable drama OST specialist), the whole pack is mostly forgettable. 폭풍 (Storm) is better than the bunch, with an unplugged-yet-not-minimal instrumentation and a couple impressive performances, but ultimately comes off just as stale.

Two tracks defy the genre categorization, and both are quality: 엉뚱한 상상 (White Christmas) combines a relentlessly joyful melody with a hybrid-rock background, and the imaginative lyrics are a breath of fresh air. Eunhyuk and Shindong‘s rap and narration verses steal the show, in particular. My Love, My Kiss, My Heart is probably the most ambitious track on the album, starring the subunit trio of Super Junior-K.R.Y. (Kyuhyun, Ryeowook, and Yesung). A dreamy synthesizer and grandiose drumline, including a timpani accompaniment, define the intricate beat and converge to an impressively powerful track.

All well and good. But at the end of the day, Mr. Simple again fails to do what Super Junior really needs it to do–establish the group musically. Six years and five studio releases after debut, I still don’t know if Super Junior has that identity. Part of the reason that Super Junior’s music is so dependent upon the whims of, say, a Yoo Young-Jin or a Kenzie or a Hitchhiker is because their identity is still very malleable. Don’t Don and the Super Junior-M single Perfection were great, while Sorry, Sorry and Bonamana have been more or less musical flops; but both these successes and failures have depended more on the producers than the group itself. Yes, this album gives us a lot of different stuff to listen to, but it’s variety for the sake of variety–not the best kind there is. You can do a lot of different styles and genres even while being musically cohesive; SM labelmates F(x) do it easily, for starters. And no, an artificial branding like “SJ Funky” was never the right solution to this dilemma. I hope SM means it when it says that this album is the culmination of this trend, because Super Junior could become so much more. Mr. Simple succeeds in proving that, at least.