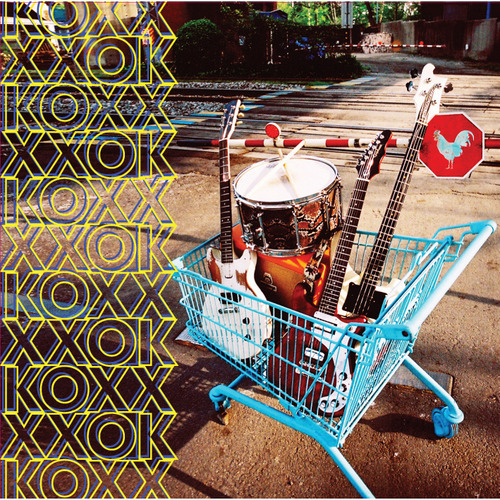 Don’t let their youth (or name) fool you–The Koxx mean business. This five-man garage rock band, with an average age of 22.5 years, made a name for itself in the college-town indie scene before winning EBS‘s “Super Rookie” title in its first attempt and subsequently getting invitations to play abroad in Japan and Thailand. I think it’s safe to say that most rookie bands don’t have that much success. A year after its official debut with EP Enter, the energetic band is back with ambitious studio alum Access OK; the hype runs high.

The Koxx practice a relatively niche genre called electro-garage. Such distinctions have little actual meaning these days, but their style involves heavy synthesizer and effecter usage that accompanies a punk/garage base. A little bit of electronica, a little bit of rock; somewhat similar to what Muse and M83 do. An obvious upside to a style like this is the range of unique sounds that you naturally get to experiment with. The Koxx take full advantage, opening the intro track XXOK (see what they did there? Read it aloud) with a highly charged, varying-tempo guitar riff and taking it through an unrelenting techno-rock chorus before ending on nearly a full minute of heady electronica outro that would be right at home on a Daft Punk album. Effecter and chiptune abound in the playful City Without A Star, the psychedelic vibe a little reminiscent of fellow Korean indie band Guckkasten, and the two-minute outro of Jump To The Light presents us with a thunderous metal riff that eventually gets a little help from pitch-adjusted sequencer that sounds like a telephone ringing. Access OK is not lacking in rich sounds.

Needless to say, that variety and richness are the primary draws of this album. There aren’t a lot of Korean albums out there where you’ll hear sound like this. The Koxx have a penchant for making two assertive genres play nicely together, especially a relief in tracks that blend those ingredients in about equal measure such as 술래잡기 (Tag). Lead single 12:00 is another exercise in moderation: this track is noticeably less speedy and less intense than the rest of the album, instead opting to rely on a steady house beat and an attractive hook (perhaps nostalgic to some listeners, as it’s adapted from a Korean children’s game) to carry it forward. The balance is exquisite, and we get a very polished urban track out of the deal.

The entire album sounds very densely packed, with small embellishments, sub-melodies, bass, and sound bites filling out the space left empty by the already complex primary instrumentation. This is the approach that Seo Taiji, always the king of modern Korean rock, likes to take: meticulous attention to detail, dense mixing. Winning formula, if that man’s work is any indication, and one that works here.

A couple issues arise, though. First, as much as The Koxx are good at holding their intensity back when they want to, for most of the album, they don’t. Basically, every track on Access OK except 12:00 and closing track The Words is a fast-tempo, no-holds-barred bombardment of sound and energy. Which is great until it gets tiring. The album might have worked better as a whole if things slowed down a little more often. Second, when the innovative electronica layer is taken out of the equation, as happens in some tracks, things become a lot less interesting. Dreamer and Fire Fox are fine, solid tracks, but with the minimal level of synthetic sounds they contain, they really don’t distinguish themselves all that much from other alternative/punk works.

A more minor quibble has to do with the vocal performance. Vocalist Lee Hyun-Song has a nice voice and knows how to use it, but he sometimes shows a perplexing disregard for getting his lyrics across, carelessly leaving words jumbled mid-pronunciation or mumbling them. Maybe it’s intentional, but it doesn’t sound all that effective to me. The Words is a good example. This one is an eight-minute epic with minimal, oft-repeated lyrics and lots of interludes, similar to Death Cab For Cutie‘s Transatlanticism. (Yes, I know I referred to this same song in my last review, too. Look, when something is appropriate…) The lyrics are poignant, and work well with the dreamy, ambient music of the track’s first half that is so at odds with the rest of the album. That is, they would be all that if we could make out what is being said. I don’t think the problem lies with the lyrics being written in English for most of the album: bands like Vassline and Crash take similar approaches, writing all-English or mostly-English lyrics even though the vocalists do not speak it, but their results end up fine. It appears more to be either intentional or careless, and it’s something that could definitely be improved upon.

Don’t let me leave you with a negative impression of Access OK, though. This is a very strong album, and The Koxx’s style and sound design are essentially unique in the Korean market. The young band has huge potential–I think they can be a game-changer, on the level of a Deli Spice or even a Shin Jung-Hyeon and the YeopJeons. Yeah, they can be that big. It’s an uphill battle for them, as it is for any other indie rock bands out there, but Access OK is certainly a terrific foothold.