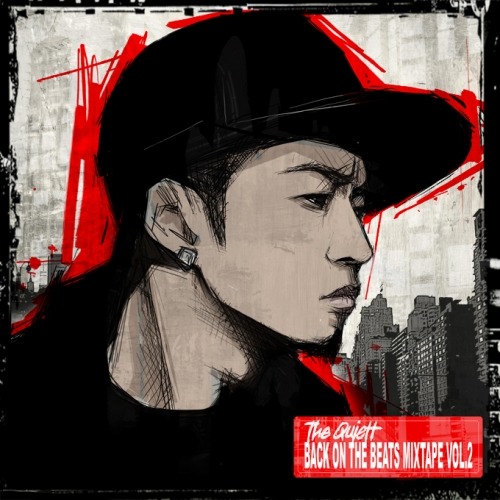 Album Review: The Quiett – Back on the Beats Vol. 2

Here he is, folks. The Quiett is back. No, it’s not his fifth studio album; we’ll be waiting a little bit longer for that. Instead, the name is Back On The Beats Vol. 2, which means it’s a sequel to Vol. 1, which in turn means this is another mixtape. Staying true to the Back On The Beats tradition, this mixtape is another collection of beats that The Q produced for other artists, with his own rap added to it. It’s proven to be a winning combination in the past: Vol. 1 was a sleeper hit, and was reprinted and repackaged due to its popularity. So a year after the well-received Quiet Storm – A Night Record, we are presented with a bunch of familiar beats and a familiar voice.

First, the most important aspect of any Quiett album–beats. This being essentially a remix collection of previously released tracks, all the selections here are exquisite; they represent some of the finest beats that The Quiett wrote. Opening track Did It Again gets right into it, sporting the heavy but austere octave-piano-driven beat from Jerry. K‘s You Did It Again. The washed-out strings and urban-electronica soundset of 덕화의 간지 (Q’s Swag) is a masterful stroke found in the Verbal Jint track 역사의 간지 (History’s Swag), while the moody jazz guitar solo in Drivin‘ appears to be a spin on the recent Dok2 closing track Come Closer/Flow2Nite. (That album was reviewed recently, by the way.)

The 매일 밤 (Every Night) series, started with Every Night 01 and Every Night 02 in Drunken Tiger‘s 2007 seventh album Sky Is The Limit (and yes, The Q did produce both tracks) and continued with Every Night 03 from The Quiett’s own The Real Me, gets another entry here with Every Night 3.5–this one shares the dreamy, R&B-cymbal heavy backdrop from 03. On the impact-track front, closing track The Inspiration Remix probably takes the cake: the imposing, swagged-up string progression and powerful drumline is just as rousing as it was in Bizniz‘s original The Inspiration.

Individually, the beats of Back On The Beats Vol. 2 are outstanding; even as a whole, they hold up pretty well together. They don’t necessarily have to, since this is only a mixtape after all, but The Q does a good job of balancing the analog with the synthetic and ensuring a smooth listening order. There’s a reason why the guy is such a successful producer, and this album only highlights his discretion more. No points lost, only gain here.

Good thing, too, because The Quiett does lose points with his rapping this time around. If you’re unfamiliar with his style, The Q subscribes to a very traditional school of thought on flow: his pronunciation is clear and syllabic, and he eschews flashy technique and speed, instead relying on the charisma of a steady, low-tone voice to emanate his presence. And none of this was ever a problem for him: he’s usually a good enough lyricist that what he’s trying to say usually takes the spotlight, and the method of delivery ends up strengthening his verses. Obviously, the flip side of that says that if The Quiett doesn’t write good lyrics, things aren’t gonna be so nice. This is exactly what happened in Back On The Beats Vol. 2.

As hard as it is to believe, The Quiett has some pretty bad lyrics throughout many songs in this mixtape. I’m not sure if he got lazy or too absorbed with the beat work or what, but that’s the fact of the matter, and it’s a more serious issue for a mixtape than a mismatch of beats would have been. I mentioned Q’s Swag as having a nice beat earlier, but frankly, the lyrics are nearly intolerable, resorting to uninspired money-swag talk and bad metaphors. (“Asia famous, 몽골 to 동남아 // Got my Korean flow, like 욘사마” is particularly horrible.)

Q’s Swag is fortunately the rock bottom. But although he’s better in other tracks, most of them are collaborations with a large cast of fellow rappers, some of the best in the country–and that doesn’t do any good for how The Quiett’s rap comes across. Every Night 3.5 sees his verse completely outclassed when put next to the triple punch of Dok2, Verbal Jint, and Paloalto; in the two tracks performed with Fana, A Master Shit and 속닥속담 (Whisper Proverb), things get even worse. The top-class rhymer in Fana drops a pretty nice verse on the former track, but goes absolutely berserk on Whisper Proverb. This track is another Jerry. K song (of the same title), and was originally written with the clever concept of trying to write an entire swag track based on old proverbs and adages. The new version keeps the same concept, but Fana’s verse is so ridiculously brilliant that it makes The Q’s still-pretty-clever verse look shabby by comparison. (I know that’s not the purpose of these collaborations, but some things just cannot be ignored.) I point this out because I think that The Quiett is still capable of rivaling any of these other rappers; he’s written some astounding lyrics before, and I’m sure that he could have done it here.

Better performances can be seen in the two tracks that feature The Q’s Illionaire Records labelmates Dok2 and Beenzino (by the way, Beenzino was confirmed as Illionaire’s newest member essentially through this mixtape), as well as thoughtful, pacifist-message track No More Cry. The Quiett again has some of the thunder stolen, this time by Jerry. K’s poetic performance, but his verse is punchy and impactful, albeit short. This illustrates a point: The Quiett is generally a better lyricist when the topic is serious. He can write pretty good swagger tracks (just not in this mixtape), but when he slows things down and writes about meatier topics–that’s where he really shines. This is why shoutout/inspirational track Friends and reflective lyrics like in Still Shinin and lead single (though that’s a dubious distinction in a mixtape) and original track Feel My Fyre stand heads and toes above most of the album.

Call it the freedom bestowed by a mixtape: the Q is allowed to get away with a lot of things in this format. In addition to the lyrical issues, there’s a number of unorthodox things (not necessarily bad) that he tries here: for one, this mixtape has a lot of really short tracks, to the point where the track count you see is slightly misleading. Q’s Swag is slightly over two minutes long like the original, Grindin‘ is actually under two minutes (it’s essentially one long verse–to heck with the hook), and several others are right around the 2:30 to 3:30 mark. A Master Shit is two very short verses-and-a-hook on different beats mashed together and called a single track. Again, this isn’t bad: just an artistic freedom that he may not have opted for had this been a full-fledged release.

The Quiett has a special thing going here. Few artists have his mix of skills as a producer and MC, and so a concept album like Back On The Beats is something only he can do. Although his personal performance leaves things to be desired this time around, I won’t call this mixtape a disappointment. There’s simply too much excellence to be heard in the beats and contributing performances, and it’s a lot of quality and quantity to be expected out of a mere mixtape. And as long as The Q keeps composing music, he won’t ever run out of material to build a Vol. 3 or 4 from; this is a blissful thought for hiphop listeners.

Note: I tried to include titles of the songs that these beats were originally used for. The mixtape doesn’t actually tell you, so it was a bit of going by memory and a bit of research for the ones I hadn’t heard of. I wasn’t able to find out for some of them–these might be originals, but if you know that they aren’t, please let me know!