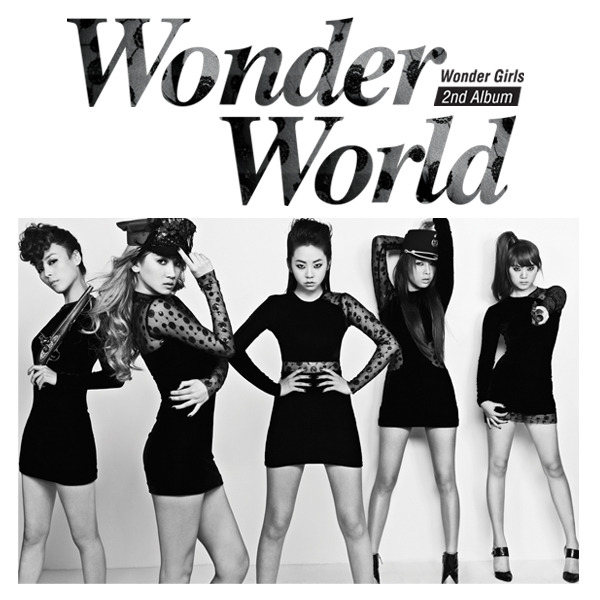 Left for dead. Stalled careers. Young stars, snuffed out all too early. These were all phrases used to describe Wonder Girls ever since 2009. Truth be told, it was hard to blame the naysayers: after the last hurrah of Nobody (2008), it seemed like not a lot was going well for this group. The American debut was frankly unimpressive; in 2010, member Sunmi quit the team; later that year, the unpromoted quickie comeback single 2 Different Tears was poorly received. Even JYP Entertainment CEO Park Jin-young‘s notorious adeptness with the media couldn’t save the public perception of this group from plummeting, and in the meantime, teams that Wonder Girls once used to vie with for girl-group supremacy cemented their place at the top.

This lamentable state of things changes with Wonder World, the group’s second studio album and their first in four (four!) years.

When you think Wonder Girls, you think retro. That’s been their formula for success: Tell Me, So Hot, Nobody, and 2 Different Tears all had retro elements, ranging from Tell Me‘s chiptune and disco soundset to 2 Different Tears‘ 80s funk, which led to explosive synergy with the five girls’ down-to-earth, accessible image. It’s fair to say that without the retro, Wonder Girls would never have achieved their iconic status. So it seems like musical suicide for them to move away from this concept; yet JYP did it, and it turns out to be the best thing the company ever did for this group. Taking the place of retro in Wonder World is trendy pop, euro synth and shuffle: it’s really not as huge a shift as you may think, considering that even 2007′s The Wonder Years had club tune and R&B pop at its core – Tell Me was just such a ridiculous phenomenon (and, to be honest, the rest of the album so abysmal) that no one really noticed. But this time around, retro takes a back seat, and we are treated with an astonishingly improved brand of JYP-style synthpop.

A minute and a half of intro track G.N.O. is all you need to hear to realize that this is the real deal. The throbbing, complex synth rhythm and layered sense of escalation are done at a level that I don’t think I’ve ever heard from JYP Entertainment; the vocalists (especially Sunye) make the track come alive through a rousing chorus of “(This is what) // Girls night out”. Now consider this. In another album, G.N.O. might be a standout track; in Wonder World, it only barely meets a very high standard of parity.

The dance-pop tracks here all ooze class. Me, in, a deliciously creative remake of the 1974 Shin Jung-hyeon and the Yeopjeons classic Beauty rearranged by Yeeun, features a deep, rich reverb beat underneath a powerful electric-guitar accompaniment that reanimates the original’s iconic guitar riff and verse melody. In my mind, Me, in shares the distinction of best track with Sweet Dreams, a sophisticated, string-based take on the traditional Wonder Girls-style club theme. Both tracks have elegant yet satisfying production, and are powered by memorable melodies.

In fact, the rich sounds and high standard across the album makes lead single Be My Baby, a bouncy synthpop track composed by Park Jin-young himself, look rather bland in comparison. Opinion on this track seems divided, much like it was for SNSD‘s The Boys a few weeks ago; in reality, though, Be My Baby is pretty good in its own way. Its biggest problem is the melody: it doesn’t really catch on like some of these other songs, and that’s often a death sentence to this kind of music. (The melody isn’t necessarily that bad: the Ra.D remix of the song, found near the end of the album, arranges it in swing jazz, and it’s a lot catchier in that rendition.) But Park makes up for it with engineering: soaring synths as well as a mechanical-quality rhythm texture reminiscent of the embellishment used in the chorus of Beyonce‘s Single Ladies are notable, as well as the overall arrangement, which doesn’t turn monotonous while hiding some of the questionable vocal performances. (Interestingly, Sohee, who always seemed to be the group’s weakest link vocally, sounds fine here, even in an expanded role.) It’s a triumph for production, and while it’s not as satisfying as Me, in or Sweet Dreams or even Stop!, Be My Baby emerges well above the average.

The role of the Wonder Girls themselves shouldn’t be lost in all this shuffle about the production. Even a cursory listen will reveal a gargantuan improvement between the vocal performances in this album and in anything prior. The Wonder Years, for example, suffered from chronically unstable notes, uncomfortable melisma, and an all-around subpar performance from everyone other than perhaps Sunye. But that was four years ago, and everyone at least holds their own in this one. Barring some gaffes here and there (especially in Be My Baby), and the strong performances in slow-tempo songs like Dear. Boy make the loss of Sunmi, formerly the team’s only stable low-tone anchor, almost unnoticeable.

In fact, there are two duets and one solo track in this album, presumably as a bit of vocal stretching room for the girls. R&B ballad 두고두고 (Time And Again), performed by the two lead vocals Sunye and Yeeun, is decent – it’s not a great track, but Sunye puts in a delicate performance reminiscent of Lyn and Yeeun shows off much-improved belting. Sohee and Yubin pair up for SuperB, where the former shows undeniably improved vocals (she’s still a bit away from being able to carry a song all by herself, though) and the latter shows that she really should be at a sub-vocal position rather than at rapper.

But the clear standout from this trio has got to be Act Cool. This one is a solo rap track by the newest Wonder Girl, Hyerim (also known as Lim), and it’s heads and shoulders above the previous two songs. To be clear, Hyerim isn’t the best rapper you’ll hear: her flow and technique are still rudimentary at best, and the lyrics seem heavily influenced by San E, who makes a sort of cameo appearance, as well as his trademark style. But she has unmistakeable swagger in a brash, reckless way; meanwhile, the punchlines are hilarious, the mannerisms stylish, and the atmosphere jovial. For example, in a bizarrely out-of-place, subdued bridge, Hyerim suddenly breaks out in song: “I’m gonna do what I want // Like this random accompaniment playing right now // Nobody can stop my flight // Because I’m a Wonder Girl”. Unless you’re someone who’s totally put off by this kind of absurdity, Act Cool (and the group’s new youngster) is hard not to like.

Actually, that’s a sentiment you could apply to Wonder World as a whole: it’s hard not to like. Especially through works like Be My Baby and Me, in, the album keeps the amiable charm that first endeared Wonder Girls to an entire nation and eventually all over the world. There is still a very intentional sense of imperfection, like the first-generation girl groups used to have; on the flip side, Wonder World is technically refined and audibly rich, making for a quality dance-pop album in its own right.

Most importantly, the album adds a dimension of modernity and trendy chic that Wonder Girls was not able to explore before. The addition of themes not seen before in their music, particularly ending track Nu Shoes, sets up a promising new direction for the group’s career. This should serve as a textbook example of how to formulate a musical group’s image the right way: through music. With a handful of carefully crafted songs, the often exhaustive work of remaking an image is completed instantly and effectively in Wonder World. It’s a very smart step for JYP, and one that restores my faith at least somewhat in Park – and, of course, in the Wonder Girls. This group is again ready for primetime, as if they were never gone. Such are the rewards of a work that is among the best dance albums of the year – period.