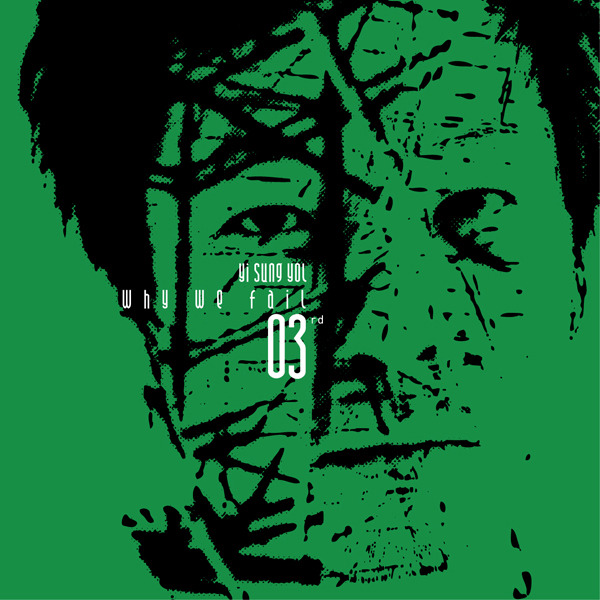 Yi Sung-yol is ready to tell us another story. This story is darker than those of Mr. Yi’s past, but also wonderfully lucid; this isn’t the kind of murky, dreary depression often associated with that term. This story is an aftermath, a denouement; anguish and healing, confusion and understanding all coexist. This story leaves it all on the table; the 41-year-old singer’s life, the worst of his struggles, and the best of his wisdom are melded into his melodies and poetry. This story is strikingly beautiful in its quest for answers. This story is Why We Fail.

The question is posed early on – in the first track, in fact. Yi’s brooding baritone flows on the dreamy buildup of opening track Why We Fail, the wistful melody and laments of “twisted heart” a harbinger of things to come. “Why we fail,” he asks, then answers himself immediately: “We don’t know.” Although his tears are “fortunately, still warm”, he is defeated, reduced. And that’s where Yi starts – from the abject depths of human ‘failure’. He works his way onward.

If loss could sound bright, 돌아오지 않아 – 위로 (Won’t Return – Consolation), the lead single, comes pretty close. If not quite that far, it sounds breathtakingly beautiful: a symphony of subtle organ and rousing piano and bass gives sound to the crystalline longing of a loved one, just as the metaphorical narrative of a butterfly suspending itself in air and dropping to the ground gives vision to the death of he/she who “won’t return”. 솔직히 (Frankly) tackles a similar topic, but this time Yi is not (not yet, at least) so accepting of the loss; the apocalyptic imagery (“How long was I asleep? The sky is alight // When the flutes of the thieves grow louder // I kneel and lay forward // All this world burns up”) illustrates his confusion and insecurity.

If those two diverge thematically within the same topic, a pair of alternative-rock tracks diverge topically within the same genre. While 라디라 (La Di Ra) exudes a message of infectious hope with a bright hook, 너의 이름 (Your Name) uses imagery of a destructive famine and effecter-heavy guitar in its portrayal of helpless desperation. The style extends out to 돈 (Money), a classic-rock ‘n’ roll piece that’s as close to social commentary as this album gets, and Yi addresses the character of money directly as he examines greed. Paradoxically, the music is almost aggressively happy-go-lucky, and Yi’s seeming nonchalance all the more contemptuous for it.

The pivotal moment hits gradually. After Your Name ends the same way it started – riding a calm piano melody – the album turns a corner, as suffering ends and understanding dawns. 또 다시 (Once Again) is driven by ambient instrumentation that serves as the backdrop to Yi’s restoration – a healing, cleansing process for the turmoil suffered in the first half of the album. The song also refocuses his (and our) psyche: he sings with wistful longing of a certain “home”, our eventual goal and destination, “A place not in my memories // A place perhaps forgotten // Faint like Mother’s arms // I bring my arms together // Like the appearance at birth // Like the word “son” // A place to be peaceful”.

Five-and-a-half-minute long 나 가네 (So I Go) feels much like the centerpiece of Why We Fail, and continues the theme of Once Again. “I’m going home”, he says, even as he worries whether his “broken body” can last long enough to make it back. The diffusive atmosphere of the previous track is expanded into trance-like ambient rock, distant yet warm, accompanying Yi on his journey. Lola and D. 머신 (D. Machine) briefly return to the depths, but they represent understanding, not more confusion; the former in its grim resolve to “not forget who we were” even in parting, and the latter in a stark realization of the nature of an ugly past. The reflections in the seven minutes of 기다림의 끝 (The End of Waiting), where he extends to another the recognition of what he’s learned (“The tears I’ve shed here // You shall recognize”) culminate in catharsis, as Yi finally exclaims, “It’s OK!”

The album ends in unlikely fashion: 그들의 Blues (Their Blues) is a decidedly lighthearted blues track, sprung after Yi’s emotionally spiritual experience over the album’s second half. Jarring? Yes. Fitting? Also yes. Folk rock legend Han Dae-soo lends his unmistakable, unkempt charisma, helping Yi discuss the passage of life in poignant, witty fashion. Why We Fail has left Yi Sung-yol wiser, more resilient, more tested and true. Their Blues is the final testament to all that it has been for him.

Just as remarkable as Why We Fail‘s spiritual, almost holy narrative is its musical accomplishments. Yi Sung-yol took real pains towards diversity in his third studio album in 8 years (not counting his U&Me Blues years): the distance between blues, alternative, folk, electronica, and even psychedelics is bridged by a journey as painstaking as the album’s thematic travels. Yi’s melodies are gorgeous as always and played crisply with an austere soundset. His voice is reassuring at times and wavering at others, but always evocative. But perhaps the greatest testament to Yi Sung-yol’s accomplishment as a songwriter is the fact that the music tells a compelling story of its own. The precarious balance between the suffocating emotion and austere beauty of Won’t Return‘s melodies; the dreamy, infinite expanses drawn by So I Go‘s fading piano intermission; the breathtaking rush of guitar and heady piano in The End of Waiting‘s electrifying climax; the haunting notes of D. Machine‘s jazz-borrowed soundtrack. They add volumes more to the story being told here, in addition to being very memorable moments on their own.

Even in his 40s, Yi Sung-yol is learning about life. He presents Why We Fail, and its chronicles of struggle, as a roadmap to the place that he has reached. The impending vision of suffering and doom, implied in 2007′s Adonai, has already come to pass, and is gone; Yi survived it, and is sharing with us what it has left behind. (This is why, although his lyrics are more introspective and cryptic than ever, they seem less like a soliloquy and more like a conversation.) What we see now is healing and restoration, cleansing and understanding. And only then does the album’s title become clear: if we did not fail, would any of this be possible? Would we reach these things otherwise? Unlike Yi’s past releases, there are no love songs on this album; that’s because Why We Fail is instead one long love song for life, in all its terrible splendor.