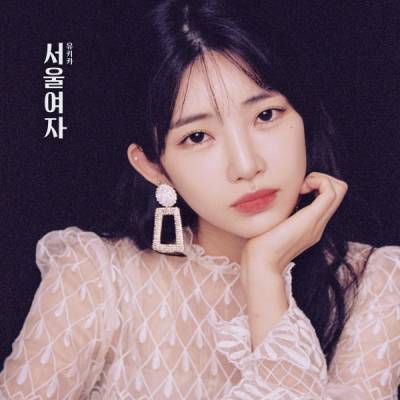 As commentators and listeners have pointed out, Soul Lady is an album where a Japanese artist sings about being of a Korean city, in a genre that originated in Japan but using Korean lyrics. For the uninitiated, Yukika is a former K-pop idol trainee, an alumnus of the Real Girls Project and Mixnine audition shows. After joining Estimate as the label’s first headliner artist, she debuted solo in 2019 with “Neon”.

Yukika’s first full-length album initially taps into that identity, the girl who crossed the sea to follow her dreams and worked fiercely to compete. Soul Lady ostensibly opens at the Haneda airport, the intro featuring someone in heels hurriedly boarding a plane headed to Gimpo. And it closes aboard the train arriving back at Gimpo and a resigned “What do I do” from Yukika, with the outro’s title implying that she isn’t going anywhere soon and setting up future work nicely.

It’s a lovely framing for the stories that could be told in between. The album doesn’t actually commit to it much beyond that framing, as Soul Lady is mostly filled with standalone themes (more on this later), but it does have one exception: the fantastic title track.

This is a good time to note that the Korean title unambiguously says “Seoul Lady”, both song and album. It’s a bit of a mystery why it’s translated the way it is; it’s not obvious from the song’s message, and I hope it’s not something so boring as “They wanted to put a twist on it”. At any rate, “Seoul Lady” is sung from the perspective of someone who’s not from Seoul.

The city can represent a lot of things. To foreigners, it’s often representative of – if not outright synonymous with – South Korea itself. And in the postwar zeitgeist, Seoul represented a kind of aspiration. Modernity, industrialization, affluence, glamour. All the elements of urban prosperity, turned up to 11 in Seoul due to its economic concentration relative to literally every other place in the country. In this sense, perhaps Seoul was even more iconic to Koreans than Tokyo was to the Japanese, in the days when city pop first came into prominence.

The really clever thing about “Soul Lady” is how it harnesses that abstract yet powerful image of Seoul to flesh out its protagonist, and doing that with city pop of all genres. Seoul represents an aspiration for Yukika too: with “A single thin one-way ticket held in my hand” and “My precious dreams I’ve held inside of me”, she arrives in the strange city. When she declares triumphantly in the chorus, “Obviously a Seoul lady, I got that vibe / It must be showing off, I worked at it / Bold and charming / This is me, a splendid lady in Seoul”, we read into it whatever opulence we associate with Seoul (even those disillusioned with the city) and Yukika’s personal journey.

The song’s sound, produced by label head ESTi, is also sumptuous. The brassy backdrop is constantly active yet moody; it’s bolstered by an orchestra of synths and bells that pack the entire sound stage full. The swerve into minor notes in the prechorus is particularly satisfying, as the string line shines through in that sudden lull and gives shape to the melancholia undergirding this whole style. Yukika’s voice bubbles to the top of the chorus, pops, and lingers for a split second before she carries on with the breakneck pace. It’s loud and intricate and dazzling, persuasively complementing the song’s luxurious and confident message.

Beyond this song, the album’s thematic coherence loosens a lot. It’s not that the songs overtly clash, but more that these love tunes are written independently of the “Soul Lady” and airport narratives: they could just as well be placed in any other album. Soul Lady doesn’t become a bad album for it, but it does seem like a clear missed opportunity.

There are good individual tracks. “Neon” is a proven commodity, and another lead single in “Yesterday” strikes surprisingly dramatic notes with those rousing chorus vocals and a snappy beat. Outside of city pop, “Pit-a-Pat” is a sleek future house number courtesy of New Type’s Tak. The ballads are generally pleasant, if nondescript.

But by its end, I feel like what distinguishes Yukika’s album is solely how it sounds. It’s a great start, but Soul Lady‘s tracks are not so consistently outstanding in their sound that they overcome the need for a compelling theme or narrative. And that doesn’t necessarily have to revolve around Yukika’s dreams or debut story – I’ve only focused on these because that’s how this album is framed, but in principle it could come from anywhere, fictional or autobiographical.

There’s a lot to be optimistic about. Yukika’s tone and performance are picture-perfect for city pop, and the album’s array of producers (particularly the MonoTree ones) prove adept at writing effective tunes in the style. Even in a genre as completely inundated as city pop is right now, Yukika’s work stands out for both polish and commitment. And we do see the potential for interesting stories in “Soul Lady” and “Neon”. I think we’ll yet be glad that Yukika’s didn’t take off from Gimpo, instead sticking around with us some more.