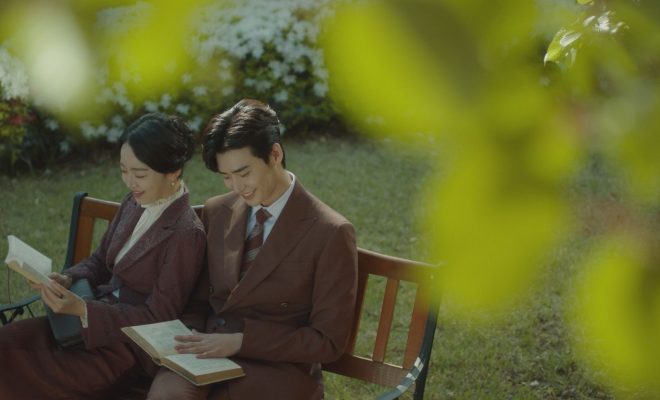 Poignant and phenomenal, Hymn of Death courageously narrated a tragic love story that will touch your hearts and put you on a pensive mood.

Albeit the agonizing love melody it displayed, Hymn of Death lingers with its retrospective message on how love might not be enough when one’s heart is battered by painful things which he allowed to happen out of self-sacrifice.

“That was such a sad love story” was exactly what I exclaimed after watching Hymn of Death on Netflix. The special drama that actors Lee Jong Suk and Shin Hye Sun brought to life touches on the sad realities of being obligated to sacrifice one’s own happiness.

Yun Sim Deok, a music student studying in Japan joins a musical troupe led by Kim Woo Jin. The latter, a son from a rich household was allowed to study in Japan, but his true passion is to write and contribute as a patriot to the crumbling Joseon.

Little by little, attraction befalls Sim Deok and Woo Jin. The time has come for the troupe to stage their play across Joseon. Met with great response from the audience, the group enjoys a night out in one of the clubs in town. The party is halted when Woo Jin is seized by Japanese soldiers owing to a line from the play that defames the Japanese empire. After being battered, he is set free and sees Sim Deok waiting for him.

The two go for a quick dayout stopping by at a big concert hall where Sim Deok dreams of performing. She makes him promise to see her in the concert hall, shall it happen. They also visit the police station where Woo Jin was detained and throw a rock on its glass window. Chased by the police, they run and hide, and almost kiss because of the perfect moment. Woo Jin stops his intention and invites her to go to his house for a party before they all go back to Japan.

It turns out that Woo Jin is married to a woman chosen by his father who has been dictating what he should do all his life.

Five years later, Sim Deok achieves her dream to perform in the biggest music hall in Gyeongseong. Reading her concert announcement in the newspaper, he heads to watch it and see her perform live. Sim Deok who spots him in the audience rushes to chase him for them to catch up.

Woo Jin walks her home as Sim Deok musters strength to tell him how she cannot forget him. He embraces her with all the love he can give and tells her not to do it anymore.

They engage in an illicit affair, with Woo Jin traveling to Gyeongseong every now and then. But the toil of managing his father’s business reaches saturation point for Woo Jin, who has been living because of the thought of his lover, and writing.

While Woo Jin has been in vocal disagreements with his father, Sim Deok also receives a wedding proposal from a rich family’s son and is being pushed by her parents. To make matters worse, she gets involved in a scandal of selling her body to another rich man who agreed to sponsor her sibling’s education expenses.

Ahead of her leaving to work for a Japanese recording company, Woo Jin visits her and they plan to meet in Japan. Invited by the Japanese government to become a regular singer for events, Sim Deok’s life continues to make her wallow in depression.

Sending off her sister back to Japan, Sim Deok reunites with Woo Jin. They sit side by side reminiscing the first day they met. Talking about a writer that they both like who committed suicide, they share thoughts on understanding what pushed the celebrated writer to end his life.

Woo Jin and Sim Deok board a ship bound to Joseon. They dance for the first time, and kiss for the last time as they fade to darkness that will become their solace.

People tend to avoid tragic stories as much as they can. Perhaps, because we don’t want to be reminded of the sad realities in life.

Hymn of Death presented the story of a man and a woman who have been living to please and make sacrifices for their families when their utmost wishes are simple joys they can easily obtain on their own.

Although it is a quick drama watch, it challenged me to formulate the takeaways from Sim Deok and Woo Jin. Their story might not appeal to a general public owing to how it touches themes of alienation, depression, disobedience to parents and even forbidden affair. So, I flipped the other side to make the lessons from Hymn of Death to be more relatable and understandable.

Of course the situation of the lovers in the special drama would not fit in the modern broad-minded thinking of today’s generation. But the striking heartbreaking end of their story would shock people who will hear it even in years to come.

Not owing anyone an apology if you can’t please them because you want to live a life that is entirely your own, is the lingering impression I got from Hymn of Death. Celebrating life and finding your purpose does not need to be grand, because often times, what makes us happy are simple things and quiet solace.

I would not recommend how the main leads ultimately resolve the conflict set by the fictional world which drowned them. However, I understand the weight of emotions bottled up inside them which led to the sad closure.

Lee Jong Suk and Shin Hye Sun scored palpable portrayals which made the drama even more affecting. The emotional yet not exaggerated weep frames they both displayed were exceptional.

Fans can watch Hymn of Death on Netflix.